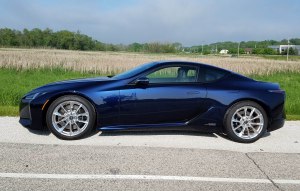 Certainly standout looks and performance are in the top couple “must haves.” But do you expect a hybrid sports car with supercar looks and a steady whine?

Well, Lexus delivers on looks, performance and comfort with its hot sports coupe, the LC 500h. That “h” signifies this is a hybrid, so it even delivers better fuel economy than could be expected in a hot coupe. But there’s also a whine here that doesn’t befit the car’s luxury standing.

Make no mistake, I’ve driven both the V8-powered LC 500 and a previous 500h and they were wonderful, both to look at and drive. Both have power galore and looks that would make a sultry supermodel blush. 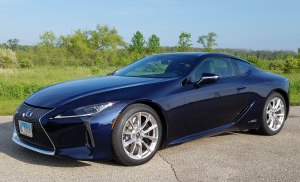 But the latest LC 500h, which had more than 7,500 miles on the odometer, already was exhibiting a steady whine or groan from its electric motor, part of the hybrid system. Didn’t hurt performance an iota. However, even with the radio on I could hear the moans and groans of the electro-mechanical system. Thankfully it went away once the car edged beyond about 30 mph.

As in other hybrids, the LC 500h uses batteries, regenerative braking and an electric motor to assist the gas-powered engine. Combined, the electric motor and 3.5-liter V6 make a satisfying 354 horsepower. Torque is good because that electric motor powers the car to about 10 mph in a few milliseconds.

Then the V6 kicks in and allows the driver to juice the GT up to highway speeds in a few seconds. While the V8, says Lexus, will do 0-60 mph in 4.5 seconds, the hybrid does it in 4.7 seconds. As I’ve said before, if you’re at a drag strip that matters, otherwise, not so much. 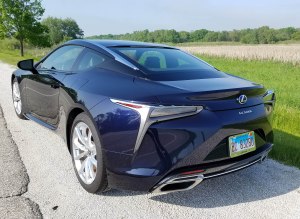 There’s plenty of power, but the hybrid doesn’t sound as racy as the V8 version, naturally. But if you’re hoping to save fuel while cruising in a style to make onlookers gawk, then this is the way to go, with little sacrifice in the way of performance.

I also got much better fuel economy in this 500h than the past one and certainly better than in the V8 powered model. I managed 27.8 mpg here vs. 22 in my last 500h drive in colder weather, and the 21 mpg I got from the V8. The EPA rates the car at 27 mpg city and 35 mpg highway. My driving was about 80% city and suburbs.

A 10-speed electronic continuously variable transmission helps that mileage and also delivers mostly seamless shifts. The only oddity here is a separate Park button on the console.

There are a variety of drive modes here too, adjusted via knobs on the side of the car’s main gauge pod. I used mostly Sport and Comfort as the later smoothed the ride and eased the steering effort, much appreciated in city driving. Other modes are Normal, Sport+ and Custom. And there’s a Snow setting on the knob opposite the main control. I could barely discern a difference between Normal and Comfort, while Sport is a nice blend of precise handling and boosted low-end power. Sport+ delivers the most pop off the line.

Handling is first rate, especially in the sport modes where the wheel feel is so crisp you’re certain you could polish off any racetrack’s sharpest apexes and still have plenty of grip. The wide RF20 tires provided plenty of that to the dark metallic blue (Nightfall Mica) test car.

Ride is sporty, naturally, as the car features a performance oriented multi-link suspension system. There’s good road feel, but a little bump in the ride on city streets, while the GT turns silky smooth on the highway. 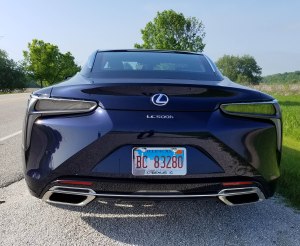 Braking is strong with monstrous discs and calipers to allow you to push the car to its limits for hours, if you can find a racetrack that will rent you track time. Front brakes are 15.7-inch six-piston opposed aluminum calipers with high-friction pads. In back are 14.1-inch four-piston opposed aluminum calipers, again with high-friction pads.  Serious stopping power here, but a good thing as the hybrid runs about 200 lbs. heavier than the gas version, checking in at 4,435 lbs.

Inside, the car is stylish, comfortable and quiet, emphasizing luxury with black leather seats and dash trim, both featuring gray stitching. The seats are seriously contoured to hold passengers in place safely while at speed and during acceleration. There are three memory settings for the driver’s seat and both front seats are heated and cooled. The steering wheel though is not heated, an oversight to be sure.

Back seats are basically useless and hard to get at, this being a coupe. Mostly the rear seat is for insurance purposes.

The doors feature suede-like inserts and the headliner is of the same material to give the interior a soft, upscale feel. Brushed metal trims the dash, buttons and door handles while the paddle shifters behind the power tilt/telescope wheel also are of this material.

I liked the standard 10.25-inch infotainment screen mid-dash. It’s helpful in seeing the view from the rearview camera, plus in tuning radio stations and making other comfort adjustments, all handled via the screen.

But Lexus sticks with its laptop-style touchpad on the console to adjust that screen. It’s awkward at best, especially while driving. Plus the touchpad seems particularly touchy, sometimes jumping around like it has a mind of its own (artificial intelligence?).

I also was put out by the constant beeping inside the cockpit any time the car is in reverse. That’s particularly disturbing when backing in a crowded parking lot where you are trying to see around giant sport-utes and crossovers as you exit a parking spot.

The center console also is fairly tall. I found myself bumping it with my right elbow at times. On the plus side, there’s a sunroof and SOS emergency system overhead.

As with previous LCs I’ve driven, this one added the $1,000 convenience package that includes park assist, a blind-spot monitor and rear cross traffic alert, items that should be standard at this price. Otherwise it had the usual safety equipment, such as smart cruise, lane keep assist that can be turned off, pre-collision systems with pedestrian recognition, automatic high beams, and such.

This one added a head-up display for $900 and a fancy Mark Levinson premium surround sound system for $1,220. Apple CarPlay is compatible with the infotainment system in the LC, but Android Auto is not. Go figure.

Starting at $97,735, which includes delivery, the test car hit $100,855 with options, or about three times the cost of my first house. Still, my house wasn’t this sporty looking or fun to drive.

Misses: Touchpad control for infotainment hard to use while driving, noticeable electric motor groan, useless back seat, no heated steering wheel, small trunk. An annoying beep whenever car is in reverse.