Supercars are like cell phones, always one-upping each other to the point that they blend together. Which one is fastest today?

They also all seem cut from the same well chiseled mold with swoopy looks and rounded edges that reflect the stylings of Le Mans-style racers, and at nearly the same cost.

Autoart has made a lot of supercar models in 1/18 scale and its latest is the McLaren P1 GTR, the racing version of this exclusive high-end boy (er, rich old guy) toy. Naturally, it’s beautiful with modified gull-wing doors that flip up for easy access to its low-riding race car interior. Our test car was a sparkling metallic blue with yellow stripes. It’s stunning on any display shelf.

McLaren’s F1 was fast, but the P1 GTR is faster. Surprise!

Designers Frank Stephenson and Robert Melville created the P1 with a MonoCage carbon-fiber monocoque safety cage that makes it both light and strong. The car weighs in at 3,411 lbs. Just 375 of the street version P1’s were built at McLaren’s Woking, England, plant. And reports vary, but 40-58 of the GTR models aimed for the track also have been produced.

Beautiful doesn’t even come close to describing this model’s bright metallic blue exterior accented by a broad yellow and red racing stripe from hood to tail. The modified gull-wing doors also feature carbon-fiber look door panels with McLaren P1 decals and red and yellow-trimmed No. 23. The number also is on the wing end plates and hood.

Other logos on the racer include Pirelli on the chin spoiler and rear haunches, and naturally on the racing slicks. There also is Technogym, SAP and AkzoNobel logos along the car’s lower sides and side ground effects.

In front are McLaren’s cool reverse checkmark lights (think of reversed Nike swooshes), a big carbon-fiber look chin spoiler, a red tow ring and a red photo-etched McLaren logo on the nose. Twin carbon fiber winglets and body-mounted aerodynamic device sit under the light and just in front of the wheel well. 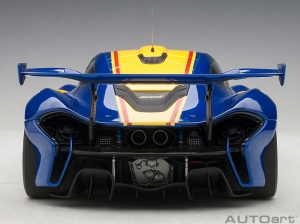 I like the tail of this car too, not just because of the massive wing, but there are dual center-mounted exhausts, and carbon-fiber diffuser that creates seven tunnels under the tail. Also exposed are the blue-tipped shocks and twin giant fans used to cool the car’s massive brakes and batteries.

Behind the massive racing slicks are giant brake rotors along with McLaren branded silver brake calipers.

Up top is a black-framed giant front windshield with big black windshield wiper to keep the racer’s view unobstructed during a downpour.

Flip up the gull-wing-like doors and you can view the black racing interior with its tall racing seat with extended wraparound head supports and yes, there are seat belts and a shoulder harness with metal clasps.

There are plenty of dash controls and big round silver air ducts on the dash’s face, along with the squared-off racing steering wheel that’s loaded with buttons. The stack, which extends from dash top to console, also is well detailed. The racer’s doors close and latch firmly due to a couple magnets in each to hold it in place once closed.

Lastly, outside are yellow trimmed side mirrors and yellow-trimmed edges to air scoop just outside the cabin’s windows in each door to direct more cooling air beneath the car.

Two last notes, the front wheels also are poseable and there’s a racer’s window within the driver’s side window. It’s molded in and cannot be opened though.

This car will quickly become the focus of any display case where it’s exhibited, and that’s without it being able to rip off a 200 mph lap.