It’s funny how life sometimes comes full circle and you are reunited with a coworker after a very long time and you find out something you didn’t know about him when you both worked together. That happened to me recently when I was reunited with Darrel Burnett. He was the Sports

Director at WLUK-TV in Green Bay, WI and I was his backup doing weekend sports and reporting during the week. From about 1981 to 1985, we rocked the Green Bay market until new owners came in and both of us ended up leaving.

I retired a couple of years ago and started this car blog with buddy Mark Savage. Darrel found me on Facebook and I discover he is running The Automobile Gallery in Green Bay. So of course I had to go up there and catch up with Darrel along with checking out a place I call car heaven. As it turns out we are both huge petrol heads and The Automobile Gallery has some pretty cool cars as Darrel told me during this interview.

More valuable to this family than any other car

I love going car spotting but sometimes the cars come to me like this 1963 Corvair. One of the fun things I do during the summer is work at Ironwood Golf Course, about five minutes from my house. One day I show up to work at a really big golf outing and what’s parked right out front? This 1962 Corvair Monza END_OF_DOCUMENT_TOKEN_TO_BE_REPLACED

A bright spot for American Motors

I remember my dad, who worked at the National Parts Distribution Center in Milwaukee, came home one day in February 1970 and told me the big news that AMC had bought Jeep. I was probably just as excited as he was knowing that we would soon be having Jeeps show up in our driveway.  One that I remember most is a 1980 Jeep Grand Cherokee Golden Hawk just like this one that recently sold on Bring A Trailer. Not only did this give the middle finger to Wisconsin END_OF_DOCUMENT_TOKEN_TO_BE_REPLACED

It’s my dad who got me hooked

And his dad before him but this Christmas will be my first without him after his passing away in February. The car dad always talked about buying was a Nash Healey. The car was introduced in 1951 beating the Corvette by two years. There were just over 500 manufactured so they are rare now going for north of $100,000.

I found this video Hemmings made that made me think of this. It’s a video about a dad and son’s bond with cars and I thought I’d share it. Boy, if this doesn’t get you into the Christmas spirit, I don’t know what will. 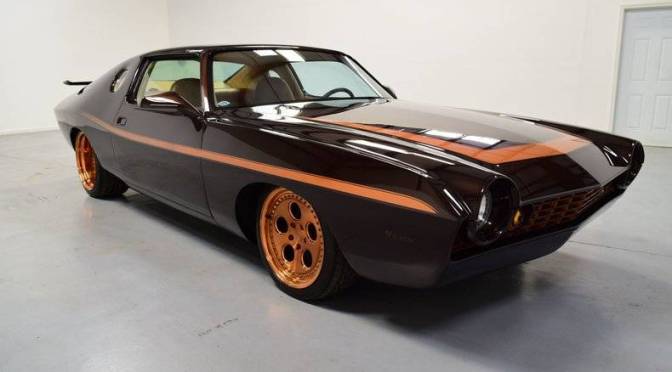 A line used by American Motors in marketing the Matador. AMC introduced a newly designed two-door coupe in 1974 as a luxury coupe. Members of the automotive press pretty much loved it. Car and Driver said, “There’s an undeniable smuggnes stamped on the fenders of AMC’s new Matador X. And each arrogant crease is integral to an overall air of confidence.” The X package, the sportiest, was one of three offered, the other two being the Broughram, and upscale Oleg Cassini.

Another unusual car made in Wisconsin 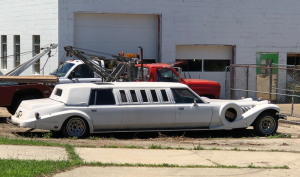 The Excalibur Automobile Corporation was born by the idea Milwaukee native, and world-famous designer, Brook Stevens  who sketched a concept on a place mat while at a restaurant in 1964. He was asked by his then employee Studebaker to create buzz for their exhibit at the New York Auto Show. I love Studebaker, in many ways like AMC, in that they had to swing for the fence to get noticed by automotive buyers. It was at the auto show that Studebaker announced they were getting out of the auto business.

But that wasn’t the end of the Excalibur. The car received so much attention the Excalibur Automotive Corporation was formed to produce the cars. The engine and drive train came from General Motors while the bodies and interiors were hand-crafted in West Allis, suburb just west of Milwaukee. The car was pretty quick utilizing a Chevy 327 engine. With the same engine used in the Corvette and the standard 3.31:1 rear axle, acceleration from 0–60 mph took less than six seconds.

And it looks even better stretched

Which is why I stopped to take a picture of it. In an era where everything from Chrysler 300’s to Hummers are stretched into limos, this one would still attract a crowd. In fact, it has more value in the collector car market than the original car. You can find Excaliburs from the mid 1960’s all the way through the late 1980’s and very affordable ranging in prices from $37,000 for a Series 3, to a 1989 Roadster Convertible for $65,000.  Not bad considering there were just around 3,500 copies made.

The limo, much less, around 13, according to their website. These are the ones made in West Allis, not ones stretched by other companies. My best source for pricing came from the National Automobile Dealers Association (NADA) where they listed the 1989 model with a low retail of $94,000, average of $177,700 and high of $280,300. You will find lots of the stretched versions around $50,000 or less. How much for this one? Good guess. Looks like it was just parked and forgotten with a group of unremarkable vehicles. Would make for an interesting restoration project and a fun ride. The body’s not in bad shape but will need some work as will the interior.

My buddy and I had just finished lunch at a McDonalds in Lomira, WI and spotted two cool black cars parked next to each other near the

back of the lot. One, a 1972 Chevy Monte Carlo, the other, this bad boy. I had to hop out and take a closer look, one because it was so cool looking, and two, I had no idea what it was. A Beemer? Nope. A Fisker Karma.

In case you have forgotten, and I did, here’s a little refresher.  Fisker produced the Karma and it was one of the world’s first production luxury plug-in hybrid electric vehicles. The Karma debuted in Detroit at the 2008 North American International Auto Show when Tesla was just getting going with its Model S. Deliveries began in 2011 but Production was suspended in November 2012 when its battery supplier, A123 Systems, declared bankruptcy. Just over 2,400 cars were built at its manufacturing plant in Delaware which used to be owned by General Motors.

In February 2014, Fisker Automotive’s Karma vehicle design, tooling and a manufacturing facility in Delaware were purchased by Chinese auto parts conglomerate Wanxiang Group who really wanted the battery side of the business. Founder Henrik Fisker, hung on to the Fisker trademarks and the Fisker brand and launched a separate company, Fisker Inc, in 2016. Wanxiang later renamed its new company Karma Automotive. 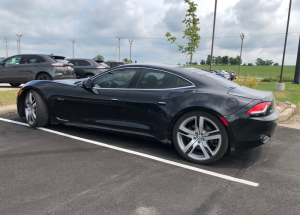 This car is over the top cool and even though a couple thousand were built, they are not expensive at all to buy now. Getting them serviced, well that’s another story. A quick search of the used car sites like TrueCar.com had several listings starting at just $32,950, all the way up to $52,500 and with low miles. Not sure I would ever purchase one but they are sure cool to look at.

One of my favorite episodes of Fast N’ Loud on Discovery channel is when Richard Rawlings and his friend Dennis Collins (who is also a big Jeep guy) go look at a Shelby Mustang they are looking to buy only to find more Mustangs, one of the Dennis describes as a unicorn. It was one of just a handful made with the exact options he explained. A car that could potentially generate a HUGE return on their investment, in the tens of thousands of dollars. The same situation is true of the plastic promotional model cars only the money is not quite as big. END_OF_DOCUMENT_TOKEN_TO_BE_REPLACED

My one shot at a collector car 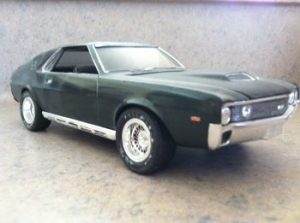 Came in 1987 while living in Green Bay. I always kept an eye out in the papers, this was before that interweb thing got big, looking for, well, I wasn’t sure. Then, bingo, a 1970 AMX was for sale in Milwaukee similar to the image of this model I built to remind myself about the experience. I had to have it. Never mind I hadn’t even seen it yet. They seller didn’t want too much for it, $2,500, which should have been a red flag, but I was laser focused. I needed fast cash since I didn’t have that much saved up and this was an impulse purchase so I went to my local bank END_OF_DOCUMENT_TOKEN_TO_BE_REPLACED

For those of you who have not read my posts before, I love Jeeps! My love affair began in 1970 when American Motors purchased The Jeep Corporation from Kaiser Industries. My dad worked for AMC at the time at its National Parts Distribution Center in Milwaukee, WI. so now I would receive employee pricing on Jeeps. Dad was the first family member to hop on when he purchased a Cherokee Wagoneer in 1988 exactly like the one in the picture. This wasn’t the larger SJ version but the XJ built on the new Cherokee platform introed by AMC in 1984 and over its 17-year run, just under three million were sold. This was ground-breaking stuff at the time essentially kicking off the SUV segment. Later on, mom wanted something easier to get in and out of and he sold this Jeep to me. That started a relationship that would last a very long time. END_OF_DOCUMENT_TOKEN_TO_BE_REPLACED

See if you can relate to this. Summer trips with the fam

It’s the mid 70’s or 80’s when the whole family piled into the family wagon to go on vacation. It could have been west like I did with my family in our 1967 Rebel Cross Country wagon. Almost identical to this one I found in the classified sporting the same Strato Blue Metalic color. Yup, I have all kinds of stuff still rattling around in my brain. Mom, Dad, and my two younger sisters went to Yosemite to see Old Faithful and stuff like that and END_OF_DOCUMENT_TOKEN_TO_BE_REPLACED