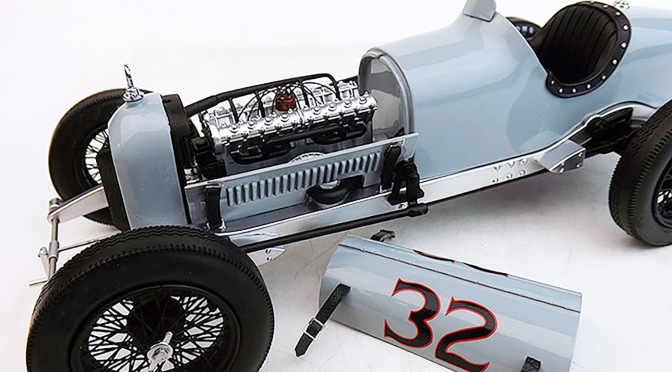 Replicarz, the Vermont-based die-cast car distributor, has been making an exclusive line of cast resin Indy 500 winners for years.  Lately it has turned its considerable attention to Indy-winning Duesenbergs from the 1920s.

This is the baby blue-gray Duesy that George Souders used to crack the winners circle in 1927, his rookie year at Indy.  Souders started 22nd after qualifying at 115.5 mph, but worked his way through the field and ended up leading the last 51 laps. Souders, a native Hoosier, only raced at Indy once more, the following year, and finished third before an accident cut his career short. 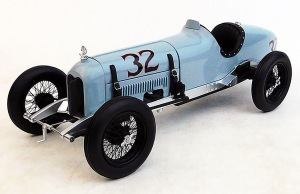 In 1927 Frank Lockhart, the previous year’s Indy winner led most of the race. But after 120 laps his car broke a connecting rod and Souders took command.  Souders holds the distinction of being the first solo driver to win Indy, meaning he had no relief driver, nor riding mechanic on board. Indy’s first winner, Ray Harroun in 1911, raced solo, but took relief during the race.

Duesenberg had won twice before and by late 1926 the company had been purchased by E.L. Cord, who also made fine high-powered cars at the time. He merged Duesy in with Auburn and Cord but the Depression killed off a lot of high-end car companies. Duesenberg was one of them. By 1937 the powerful, luxurious Duesenberg brand was dead. 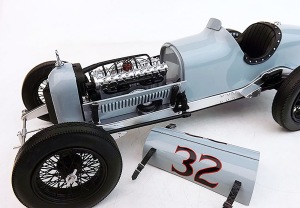 Like the bright yellow 1925 winning Duesy of Peter DePaolo that Replicarz released recently and Scale Auto DC reviewed previously, this model is, well, a winner.

First, it’s beautifully molded and finished and since sponsorship didn’t rule the motorsports world in 1927, only a dark blue No. 32, trimmed in red, graces the car’s body. No motor oils, tire companies or .com businesses are plugged here!

As with earlier Duesenberg models, the hood comes off in two pieces if you unfasten the leather straps, two on the left, one on the hood’s right side. Underneath is a silver replica of Indianapolis-based Duesenberg’s powerful 122cid straight 8 engine. Wires run to the distributor and the engine features a big black pipe extending off the supercharger that pokes out the car’s left side. 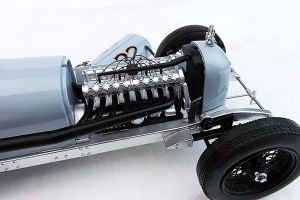 On the right is a blackened exhaust pipe running past the cockpit, which features a matte black seat with silver-painted rivets around the edges. There’s a giant 4-spoke steering wheel with silver hub and spokes, plus five reflective gauges on the silver dash.

Underneath is a detailed suspension, although simple at the time, with brake cables. And the black wire wheels wrapped in treaded tires are beautiful. Too bad there’s no Firestone branding on the tires though.

Down low in front is a crank that was used to start the engine and up front is a fine screen mesh radiator. If antique racecars are your thing, this is one you’ll want in your collection. 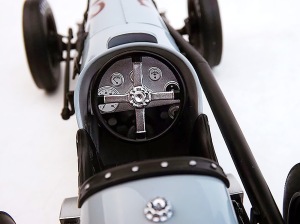