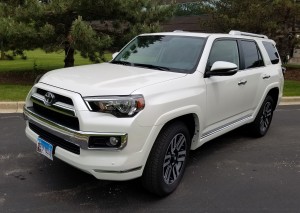 Technophobes and off-roaders have a rare opportunity to live life large aboard Toyota’s rough trail loving 2018 4Runner. That’s because this off-roader has not yet been updated to include all the electronic gee-whiz gadgets that fill most others in the segment.

Some might say the 4Runner is long in the tooth, others may just say thank you.

That’s not to say this test truck was low tech. It has what you need to haul and tow and play in the muck. There’s just no smart cruise control, blind-spot warning system or lane departure warning. Heck, it even has a key-operated ignition. Imagine! But all those new-fangled goodies will be along as soon as Toyota updates the 4Runner as it already has most of its fleet.

This test truck was a Blizzard Pearl (bright white) Limited 4×4 version. It starts at $45,755 and added just carpeted floor mats for $224 and the special paint job for $395 to land at $46,374. You can pay that and more and still not have as worthy an off-road vehicle.

The 4Runner is a big heavy truck that will tow up to 5,000 lbs. and has a variety of off-road settings engaged via a knob on the console next to the shifter for its 5-speed automatic transmission. Some will call that tranny old-fashioned too as most trucks have 6- to 8-speed gearboxes now. But it works fine with Toyota’s V6.

Power is solid from Toyota’s 4.0-liter V6 with variable valve timing. This is a proven power plant that pumps out 270 horsepower and 278 lb.-ft. of torque. You’ll never feel quick in this big beast, but you’ll feel you can haul or pull a good-sized load.

Ride is typical truck, fine on the highway, but a bit bumpy around town as this is a body-on-frame vehicle, the definition of a truck. Ride is better than in the TRD version I drove about a year ago. But large bumps can create a bit of a jolt.

Handling is OK, but steering effort is rather numb as there’s not much feedback via the wheel and a fair amount of play in it. But there’s not much body lean in tight turns and the 4Runner is easy to control on the highway. 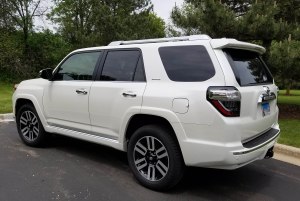 There are vented disc brakes front and rear to give 4Runner plenty of stopping power too. The Limited also rides on 20-inch tires, up from 17 inches standard on lower trim levels.

Inside, the white truck featured a black leather interior with white stitching on the seats and dash, plus wood trim on the passenger’s side dash. Air vents, the center stack and console feature matte silver trim.

The interior is quiet too, with just a bit of road noise from the tires. Wind  noise was minimal.

4Runner’s dash is clean and easy to figure out, but the data screen is too small for this size sport-ute. One suspects the next iteration will have a much larger touchscreen. But below that are large climate control knobs and there are heated and cooled seats in the Limited. 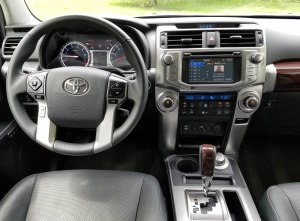 Standard too is a tilt/telescope steering wheel with radio and trip computer buttons on the hub, plus cruise control on a separate stalk. The radio also is upgraded in the Limited to a premium JBL sound system with 15 speakers. It sounds terrific.

The 4Runner’s seats are well contoured and comfortable enough that on a road trip to Louisville I didn’t have much derriere fatigue. Front seats are powered too and the driver’s seat has two memory settings. Sadly there’s no heated steering wheel.

This model has a third row seat too, so can seat up to seven. Plus both rear rows of seats fold flat for easy storage in back and are easily adjusted. While legroom isn’t generous in the third row, an adult can squeeze in for a short drive.

Oddly the Limited did not have a power rear hatch, and this one is pretty heavy. While that’s not a deal breaker, a power hatch has become standard equipment on most sport-utes and minivans. I’m betting the next gen 4Runner has one.

Good news, the Limited comes with a sunroof though and its sun visors do slide, but are narrow so don’t always block side sun.

There also are no running boards on the Limited, so the step up is pretty high, creating a fair sized stretch to climb aboard. But ground clearance is a solid 9.6 inches if you’re going off road. There is an overhead handle on the passenger’s side, but only the wheel for the driver to use to pull him or herself up into the cab.

Gas mileage is pretty poor, as you’d expect in a mid-size sport ute weighing nearly 4,900 lbs. I got between 19.6 and 22.1 miles per gallon in mostly highway driving. The EPA rates the Toyota at 17 mpg city and 20 mpg highway. 4Runner drinks regular fuel.

While this near top-level Limited is fairly pricy, the test ute going for nearly $47 grand, the base SR5 with two-wheel-drive lists at $35,655 and comes with the same 5-speed automatic transmission. Move up to 4WD and the list price is $37,530 including delivery.

The SR5 Premium model with 4WD lists at $39,360; then comes the Limited model. Moving up further to the TRD Off-Road Premium mode bumps the price to $40,749. That’s before adding options.

4Runner remains a solid choice if off-roading is your desire and you don’t feel compelled to have the latest safety equipment. It also may save you a few dollars as Toyota dealers may be ready to deal on these as other makes offer more features.

Misses: Poor fuel economy and way short on safety features (no blind-spot warning, smart cruise, lane departure) numb steering, no running boards, no heated wheel, no power hatch, plus a small touchscreen and visors that slide, but are too narrow.