OK, I’m an Indy 500 nut and I know that shows in some of the products we cover here. But, to be honest, Indy has been regained much of its luster in the last 5-6 years and there’s a lot more IndyCar die-cast being offered.

You know about a lot of the vintage 1/18 and 1/43 scale Indy cars being offered by others. In fact there’s another in this issue. But Greenlight, a die-cast maker out of Indy, has been specializing in current Indy cars in 1/18 and 1/64 scale for several years now. They have the Indy 500 license for those and that’s where we’re going with this review.

This year Greenlight tried something different. It has created a vignette of sorts, posing three of its 1/64 scale racers together on a reproduction of the Indianapolis Motor Speedway’s (IMS) yard of bricks, its start-finish line.

The trio here are the podium finishers from the 2017 Indy 500, the final year of the former Indycar aero kits where the rear wheels are mostly surrounded.

Indycar developed a safer car, the DW12, with winglets and bodywork behind the car’s rear wheels and raced that design from 2012 through 2017. Greenlight has been producing the car in various team and driver trims much of that time, so it seems a no-brainer to put the top three finishers from the past year into one display.

In addition to making a handsome display, you get three cars for slightly less than the price if you bought them separately. And like all of Greenlight’s IndyCars, these are well painted and marked exactly as they were on race day.

It’s that accurate paint scheme and all the sponsor decals that make these so appealing. That and the detailed body work in such a small scale makes these eye-poppers. 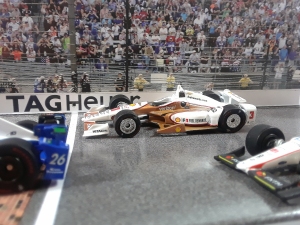 Sato’s car is mostly blue with white a white stripe atop the car, extending from in front of the cockpit over the tall fin behind the driver. The tail’s winglets are green on top and the extended side aero features next to the cockpit are black with white wings including the sponsor, Ruoff Home Mortgage logo, which also is on the car’s sidepod and nose wings. Other logos on the No. 26 car include Honda, Panasonic, Firestone, Napa and IndyCar.

Castroneves’ No. 3 racer is the sharp gold and white paint scheme with Shell, Verizon, Hitachi, PPG, AAA,  and SKF logos and the more rounded wheel guard wings in front of the rear tires that Chevy used in 2017. The Honda cars have straight flat wings protecting the rear wheels.

Jones, the highest finishing rookie in 2017, has a color car with black front and rear wings and side body extensions, while the Honda’s body is mostly white, but with orange and chartreuse accent stripes. The No. 19 racer had Boy Scout sponsorship and features the logo that says, “Be a Scout!.” Other logos here include FXTM, Honda, Sonny’s BBQ, and Valvoline.

Tires on all the cars are properly labeled Firestone and include an IMS logo. Plus I like the detailed silver and black exhausts in the Honda bodywork. Another nice touch is the digital readouts on the car’s cowl behind the cockpit, each accurately labeling the cars final finishing position.

Great collectible for any IndyCar or open-wheel racing fan.