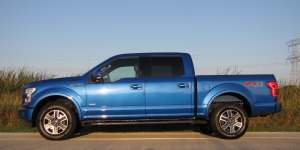 The Ford F-150 has been the best-selling vehicle in the United States virtually forever and there’s a reason for that, it’s a darned nice truck.

Now that it has an aluminum body and notwithstanding the funny Chevy commercials poking fun at it, it’s even better. It’s lighter and more fuel efficient and at least from all outward appearances, just as strong and reliable as in the past.

Chevy can tweak Ford all it wants, but over the past several years Ford has come up with a series of new Ecoboost engines that are high horse, high torque and more fuel efficient. Now it lightens its pickups by roughly 700 lbs. by developing high-strength aluminum for the bodies. Hmm, sounds to me like a leader protecting its lead!

Let’s make no bones about it, the bright blue (blue flame metallic) test truck, a 4×4 SuperCrew was still plenty heavy, tipping the scales according to Ford and other automotive test sites, at nearly 4,700 lbs. But that’s about 900 lbs. lighter than a Toyota Tundra I tested earlier this year and a several hundred pounds lighter than a similar Chevy Silverado.

That does help fuel economy, which I realize is of minor importance to some folks now that gasoline has dropped back below $3 a gallon. But it’s a money saver over the life of the truck, and, one could argue, better for us all.

The test truck was rated 17 mpg city and 23 mpg highway, which may not sound great, but is an improvement over most trucks and better than the 14/18 mpg that the previous F-150 I’d driven was rated. This time I got 18.4 mpg in about 60% city driving and 40% highway.

I can tell you from experience that 18 mpg is about as good as I’ve ever gotten in solely a highway drive in other pickups, and highway driving is generally where these big boys are most efficient. For instance, I managed just 14.6 mpg in mixed driving in that Tundra I drove earlier this year.

Now I know that most folks who buy a pickup are less concerned with fuel mileage than towing capability, and the F-150 continues to deliver on that end. Towing capacity for the test truck, which added the optional ($400) 3.5-liter EcoBoost V6, is nearly 12,000 lbs. That’s near the top end for non-heavy-duty pickup tow capacity. This being a SuperCrew with two full-size rear doors so it’ll comfortably carry five adults, the towing rating is a tad lower than a SuperCab (rear-opening smaller rear doors) and Standard cab (2-doors).

My blue beast also had 4-wheel-drive, Ford using a dial on the dash to allow the driver to select between 2- and 4-wheel drive, including low and automatic settings. Easy to use!

From a comfort and driving standpoint the F-150 mostly excels. The ride is well controlled and the long 145-inch wheelbase helps it bridge road bumps and imperfections. One would imagine that would also help off-road too. Where some other trucks seem to still have too much rebound after a serious bump, the Ford’s rebound is cushioned and comfortable. Riding around town was a pleasure in the F-150.

Power from that 3.5-liter is solid too. It creates 365 horsepower and 420 ft.-lbs. of torque, so you can punch the gas pedal and get a quick boost as the twin-turbos give it instantaneous power. Standard on this model is a 2.7-liter EcoBoost V6 that is no slouch at 325 hp and a torque rating of 375.

A 6-speed automatic transmission is standard and works well, plus the braking is first rate with big discs at all four wheels.

Handling is not as precise as I’d like with a fair amount of play in the wheel. That means you can turn it a few inches one way or another without changing the vehicle’s direction. The wheel feel is mushy with little road feedback. Yet the Ford was easy to keep in its lane on the highway and some softness to the wheel may be OK if you’re towing a trailer that can cause a bit of vehicle sway, especially on windy days.

Inside the truck was spacious and quiet, easily the quietest pickup I’ve ever driven. Seats are fairly flat and comfortable and this one had heated and cooled front seats, heated outboard rear seats and a heated steering wheel. Nice!

Seats were black leather with a black dash that featured pewter trim by the air ducts and on the steering wheel hub. There was slight chrome trim on the ducts inner edge and a vertical strip of carbon fiber-look trim on the doors and a bit on the passenger’s side dash.

The instrument cluster looks a bit like that of an airliner, a lot of numbers lit up, but everything was easy to see and read. I like that there are buttons for the climate controls and radio, plus dials for tuning. All are easy to understand and use while driving, plus big enough to use while wearing gloves in winter.

Naturally there’s a big video screen for radio and navigation and the back-up camera. This model also has a 360-degree camera that shows you your vehicle from above and is extremely helpful in navigating tight parking spots.

Other major pluses are a giant dual sunroof ($1,295), big mirrors and easy-drop tailgate that slowly lowers so as not to bang down and make a racket. Ford’s cut-down front side windows also aid visibility considerably. They help you see the mirrors better, plus allow some visibility around the mirrors.

A lot of the extra goodies come as part of the Lariat package, which adds nearly $7 grand to the price. But if you are going whole-hog on your pickup this is the stuff you’ll want. 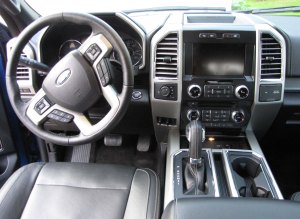 My bet is that Ford’s F-150 will not lose a beat in the sales wars, even if most of us would rather be locked in a steel cage than an aluminum one when a bear attacks. Sorry Chevy!

Misses: Price, steering feel is mushy and too much play in the wheel.

Made in: Dearborn, Mich.