Eyeballed my first Studebaker Avanti at my first Indianapolis 500 in 1962. The car was just about to be produced and was the “ceremonial” pace car for that year’s race, won by Roger Ward. A Studebaker Lark convertible was the “official” pace car. 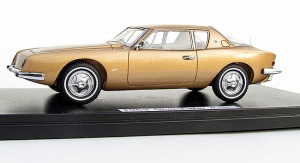 This car looked futuristic, and still looks contemporary. Its fastback styling, edgy nose and tail and sporty dimensions made it a head turner. If only Studebaker hadn’t gone bankrupt just a few years later. But now collectors can get their own 1:43 scale resin version from Automodello, which continues to turn out some of the more rare and unusual classic cars, and in a variety of scales.

Studebaker needed what is now known as a Halo Car, one that exudes creativity and set the tone for the company. Chevy had its Corvette, and Ford its Thunderbird at the time. Avanti was Studebaker’s sports coupe, designed by a crew led by famed designer Raymond Loewy. Supposedly they had 40 days to crank out the concept and thus Avanti was born.

But Studebaker was desperate. After about 110 years in business, first as a wagon maker and after the early 1900s a car and truck maker, its sales were sagging. It had merged with Packard in the mid-1950s, but that didn’t help much and by 1962 the South Bend, Ind.-based company needed a big shot in the arm, or showroom. 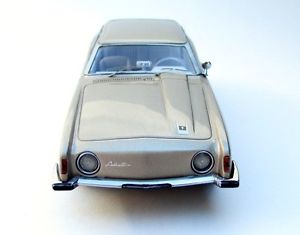 That was Avanti’s aim, but it fell short, mostly due to Studebaker’s financial problems and when the company officially folded in 1967 fewer than 6,000 Avanti cars had been built. They were only produced in 1962 and ’63 and rode on a 109-inch wheelbase, weighed 3,095 lbs. and featured a supercharged V8.

Various other companies and Studebaker dealers tried to resurrect it several times and specially built replicas were built as recently as 2006.

Automodello’s review model is the 1963 supercharged version in metallic gold, which is the color I most recall seeing. The interior is white.

As with previous Automodello resin models the car’s lines are crisp and perfectly proportioned, and like a quality diecast model, there is heft to make you feel the car is substantial. There is precision to the shape too, like the slim power bulge in the hood directly in front of the driver and culminating in the photo-etched twin-point Avanti logo. Hood and trunk creases are well delineated as are door frames.

In 1963 cars still had chrome bumpers and these are slim and attractive front and rear, the front bumpers having black edging to keep the original from tiny parking lot dings. The nose features the simple round headlights that gave Avanti such a simple, elegant look and the amber running lights are built into the front-facing edge of its long slender fenders. 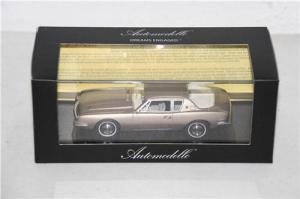 Hubcaps, door handles and window frames are all chrome and the model features a chrome driver’s side mirror. There also is a chrome antenna atop the driver’s side rear fender, chrome wiper arms, interior rearview mirror and logos on the car’s C pillars. A photo-etched metal Avanti nameplate graces the car’s nose and Studebaker appears on the trunk’s lower lip.

Rectangular red and white taillights mildly wrap around the tail and there’s an Avanti license plate in back, plus you see two single exhaust pipes there too.

The Avanti comes with treaded white-sidewall tires, but they are not branded.

With its big sloping fastback rear window and large side windows, including vent windows, the Avanti easily shows off its stylish white interior, including a 2-spoke steering wheel and dash-top rearview mirror. Gauges look realistic and you can identify the radio and buttons on the large center console between the bucket seats. In many ways, this interior looks very modern, like what you’d see in any car today, a testament to Avanti’s futuristic styling.

This is a beautiful rendering of the Avanti, an iconic sports coupe that was ahead of its time, but sadly underfunded. Ultimately it failed along with the historic firm that made it, albeit for a brief while. 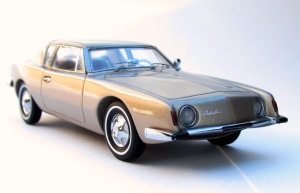