Eyeballed my first Studebaker Avanti at my first Indianapolis 500 in 1962. The car was just about to be produced and was the “ceremonial” pace car for that year’s race, won by Roger Ward. A Studebaker Lark convertible was the “official” pace car.

This car looked futuristic, and still looks contemporary. Its fastback styling, edgy nose and tail and sporty dimensions made it a head turner. If only Studebaker hadn’t gone bankrupt just a few years later. But now collectors can get their own 1:43 scale resin version from Automodello, which continues to turn out some of the more rare and unusual classic cars, and in a variety of scales.

Studebaker needed what is now known as a Halo Car, one that exudes creativity and set the tone for the company. Chevy had its Corvette, and Ford its Thunderbird at the time. Avanti was Studebaker’s sports coupe, designed by a crew led by famed designer Raymond Loewy. Supposedly they had 40 days to crank out the concept and thus Avanti was born.

But Studebaker was desperate. After about 110 years in business, first as a wagon maker and after the early 1900s a car and truck maker, its sales were sagging. It had merged with Packard in the mid-1950s, but that didn’t help much and by 1962 the South Bend, Ind.-based company needed a big shot in the arm, or showroom. END_OF_DOCUMENT_TOKEN_TO_BE_REPLACED 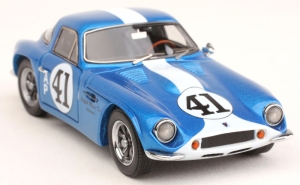 I know cars, but beyond the Griffith sports car name, this Series 200 race car was new to me. That’s how rare they are in the car world (only 192 were made), and in the die-cast car world.

But rare is good when you’re collecting. The review car is a stunning 1:43 metallic blue Griffith Series 200 from Automodello, a newer specialty die-cast car maker from Buffalo Grove, Ill. To make this one even more special, it’s one of just 85 Tribute Editions that were made to mark Jack Griffith’s 85th birthday. He founded the car company. The car’s license even reads “85 Jack.” Plus this model is autographed by Griffith and Bill Warner, who puts on the Amelia Island Concours d’Elegance each year and which recently honored Griffith. END_OF_DOCUMENT_TOKEN_TO_BE_REPLACED