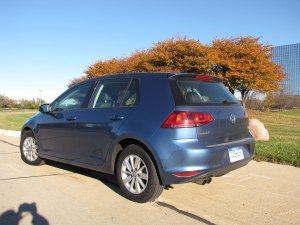 There’s a saying about everything old being new again, and the reworked 2015 Volkswagen Golf is a sterling example.

The Golf and Rabbit hatchbacks have been sold by VW since 1974, this latest iteration being the seventh generation. Toyota’s Corolla is one of the few competitors to be around longer, it launching in 1966.

Still, the essence, the useful four-door hatchback that’s fun to drive remains the same for Golf. And while its lines have been tweaked a bit and the car stretched by 2.1 inches, you’ll have no trouble picking out of a crowd. Golf looks like a Golf, for better or worse.

That’s a matter of taste, but from a performance standpoint, the Golf is easily one of the more fun compacts on the road. Handling and ride are as good as, or better, than most of its competitors, and it has a lot of worthy competitors, such as the Mazda3, which also is a delight.

Golf is just flat out fun to drive. Its steering is light and easy, helped by the car’s modest 2,963 lbs., about 79 lbs. lighter than the previous Golf. The car also is responsive so you can toss this hatch into a corner at speed and feel good about it.

There is precious little body roll and Golf’s front-drive layout helps it track well through a corner, while the electrically assisted steering is speed variable, so firms as you hit the highway. Naturally we’re not racing these, but you feel sporty in the Golf and more importantly on Wisconsin’s deteriorating roads, the car handles and rides well over bumps. This is what surprised me most.

The multi-link rear suspension is compliant enough to soften our worst bumps and pavement seems. Shock dampening is good and the overall ride is controlled. I took this on several streets known to loosen fillings and never felt anything close to a jolt or major bump. High praise for a car with a 103.8-inch wheelbase. Usually the ride gets smoother when the wheelbase is 106 inches or more.

Folks wanting a little mini-rocket will be pretty happy too. This isn’t a neck strainer, but at 170 horses and 200 foot-pounds of torque, the Golf’s 1.8-liter 4-cylinder turbocharged engine makes the car peppy. That’s aided by a 5-speed manual transmission in the “blue silk” test car, a 4-door S model. The manual helps you put the power down efficiently, but I must say I was surprised it was only a 5-speed.

I also found the gearbox notchy. By this I mean that sometimes finding the proper gear was a bit sticky. This one tended to want to move from second to fifth gear easily, so you had to work a little to find third. Gearing also was such that you wanted to hold each gear as long as possible because an early shift (even when the light on the dash indicated it was time) the car would bog a bit. Admittedly after a week I’d adapted to the gearing, but you’ll want to test this out to make sure you’re comfortable with this setup. Sometimes it was a bit tough to slip the shifter into reverse too.

Braking was good though, with front and rear discs and ABS. The VW also comes with stability control.

The car’s efficiency also is a big plus, this version rated at 25 mpg city and 37 mpg highway. I got a solid 31.9 mpg, and there aren’t many cars I drive in a year that can beat that, unless they’re a hybrid. Mine was about an even mix of city and highway miles and regular unleaded is preferred.

Inside, the Golf impresses too with its quiet, luxury feel and even with a leatherette interior, which VW has popularized for years, this looks more upscale than most entry-level small cars.

The blue test car had a charcoal gray dash and perforated leatherette seats with a sophisticated brushed metal look trim on the dash, center stack, partial console and doors. The look is much less plain than in many former VW economy minded models.

Seats are soft and relatively flat, but comfortable and easy to enter and exit. The seat back has a bit more contouring to it and these are mostly manual seats, only the seat back angle being powered. VW does give you a pump handle on the seat’s side to raise and lower the driver’s seat though.

The steering wheel is a tilt/telescope model and the steering wheel, amazingly, is flat-bottomed, which not only looks racy, but allows for easier ingress and egress. That wheel also has radio, cruise, phone and trip computer controls on it, a feature found on the S models. The leatherette seats along with shifter knob and parking brake handle also come with the S, as does cruise control and aluminum alloy wheels.

I like the dash layout too with white on black gauges directly in front of the driver, a digital readout between the tach and speedometer. A good sized, 5.8-inch, touchscreen is mid-dash and has eight buttons around it for easy use. Despite this being a modest priced car, its radio system was much easier to use than most luxury models I test. Below the screen are three large climate control knobs. Hey, this doesn’t have to be difficult!

Four adults will fit here too, if no one is unusually tall. Just have two folks on board? You can flip down the rear seats to fold flat and carry a large load of cargo. Even with the seats up there’s good space behind the second row, which includes a fold-down center armrest that includes a pass-through so you can carry a few long items and still seat four.

In back the VW emblem on the hatch serves as the release handle, a clever design feature.

Other pluses include 8 speakers with the radio, which includes satellite service and MP3 playback. There’s Bluetooth connectivity and Media Device Interface and reading lights for the rear seat. Overhead lighting is good, plus the visors included lighted mirrors and the visors slide to protect the driver from side sun.

Pricing also makes the 4-door Golf attractive. You get all this for $19,595 plus an $820 delivery fee for a total of $20,415. No options on the test car and it was still a fun car to drive. I’d call this one high value, whether you consider its slightly altered looks dated or classic.

A base Launch Edition model started at $17,995, if you can find one. There also are two-door Golfs starting with the S at $18,995 with the five-speed manual, and a variety of levels with four doors, including an SE and SEL. If you’re a turbo-diesel fan, the TDI models come with a 2.0-liter clean turbo-diesel and offer a 6-speed manual or automatic. Golf gives you a lot of choices.

Hits: Superior handling and ride for a small hatch, plus excellent fuel economy. Interior is quiet and looks upscale with soft leatherette seats, leather flat-bottomed wheel, handsome dash with easy to see and reach gauges and controls. High-value hatch is practical and fun.

Misses: Notchy shifter and only a 5-speed. Dated looks, although some might call them classic.