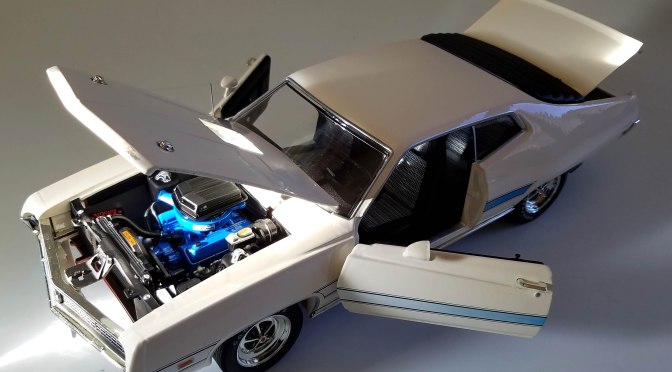 Clint Eastwood loves his Gran Torino, both the car and the movie he made that revolved around one. But Torinos were mainstream, a lot of folks owned them in the late 1960s through the mid-1970s.

That’s because they were the midsize or intermediate Fords, good for families and modestly priced. Plus starting in 1968 they were fairly stylish, going with a fastback look that contrasted with some boxier GM and Chrysler products.

Like most cars of the time though, muscle was added to put a halo on the makers’ family cars and those cars were incorporated into stock car racing. “Win on Sunday, sell on Monday.”

Auto World doubles up on its honors here with a Wimbleton White 1971 Ford Torino GT marking the 50th anniversary of the car and the 30th anniversary of AW’s American Muscle series. This year AW calls all its 1971 diecast car releases its Class of 71, cool for those of us in high school at that time.

This one is a spiffy version with the hideaway headlight option and a white to blue laser stripe down its side.

Torino replaced the Fairlane in 1968 (although the Fairlane name remained on the cars until 1971). Yet by 1971 all intermediate Fords were Torinos, named after the Italian city of the same name, which also has strong ties to various automakers. Plus, by 1971 enough of the snazzy hardtop coupe fastbacks had been decked out with high-performance engines and options, for Torino to be considered a muscle car.

In fact, Torinos were being raced successfully in NASCAR from 1968 through 1970, winning the 1968 and 1969 NASCAR championships with David Pearson. But after Chrysler’s Plymouth and Dodge brands came out with their Daytona versions and Superbirds in late 1969 Ford’s dominance quickly evaporated and Ford officially dropped stock car racing in 1971. However, some Torino and the aero version Talladega cars were still run privately.

For production GT models Ford used the 428 cu.in. and 429 cu.in., 7.0-liter V8s known as Cobra-Jet engines to power up the Torino. That 429 is the engine depicted here, and of course sports the Shaker hood which came with the Ram Air system to boost horsepower to 370.

For the record 14 Torino models were offered, including convertibles, wagons, 4-doors and the modeled coupe. The GT was available with the SportsRoof (modeled here) and as a convertible.

For 1971 Torino had a divided front grille while the GT model’s divider was smaller and included its nameplate. The hideaway headlight option was also available which meant a smaller grille divider too. The Torino name lasted until the 1976 model year when Ford moved on to the less interesting LTD. Torino’s sister car was the Mercury Montego.

In profile the Torino always looked fast with its fastback SportRoof and the GT’s black louvered rear window covering aimed at directing airflow quickly over the roof and trunk which featured a modestly flipped up rear lip.

The paint scheme here is simple yet deep and rich looking, plus that white to blue stripe that tapers to the rear gives this Torino a crisp, almost icy sharp appearance. Further spiffing its looks is the chrome grille that covers the lights and includes that insignia at its midpoint to divide it. On the long Shaker hood is a black scoop to force air into its Ram Air system and feed the big V8. Two hood pins mark the hood’s front edge.

Flip up the hood and it easily stays in place to reveal the blue V8 with matching round air filter case and black air scoop that extends through the hood. AW includes a nicely detailed radiator, hoses and wiring, plus an Autolite battery, master brake cylinder and upper suspension connections. This car displays well hood up, or down.

Likewise the trunk opens to reveal a full-size spare tire. Remember those?

Tires are treaded Goodyears with chrome Magnum 500 wheels, including the spare. And remember the undercarriage with dual exhausts is well detailed here too, something many 1:18 scale models ignore. Oh, and the front wheels are steerable for more interesting display poses.

I also like the red taillight bar, the chrome door handles and body-colored mirrors. The white license plate is marked for New Jersey, the “Garden State.”

Inside, the black seats have black and white tweed inserts, there’s a T-handle shifter on the console and the steering wheel is a proper 3-spoke number with logo on the hub. The black dash is well detailed with glove box release button and full wide speedometer behind that steering wheel, plus a few round gauges and of course there are metal-trimmed pedals below. Black floor mats appear to be rubber.

Everything looks as it should here, and like its real-world counterpart the seam lines on the doors are less than perfect. But that’s 1971 for ya!