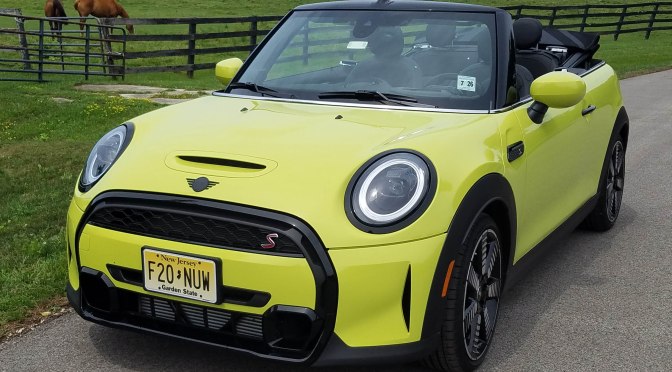 Extroverts love MINI Coopers and they should, people chat you up when you’re driving a Zesty Yellow (looks like neon green) MINI Cooper S Convertible.

Tony was one. He stepped right up in the Woodman’s parking lot to declare the near glowing MINI a sharp looker, and that was before I showed him the amazing power ragtop all decked out to resemble a blacked out Union Jack ($500 extra). Subtle!

It’s that roof that makes this MINI maximum fun, first because it powers down with the flip of one toggle by the windshield’s top. Only takes about 18 seconds for it to fold back into what would be a trunk. More on that trunk in a bit. But MINI (a BMW sub-brand) has finessed the top to retract partially first, creating, for all practical purposes, an open sunroof. Then if you’re wanting total exposure, hold the toggle and the roof reclines completely. Cool! Tony, a Ford F-150 driver, laughed and declared it a winner. It is!

I’ve said before that driving a MINI is more fun than anything else you can do with your clothes on, and it still is. This 2022 S version is frisky and the test car’s blacked-out theme ups the cute factor to about an 11.

In addition to that snazzy darkened British flag motif on the roof the MINI logo on the nose and tail are blacked out, meaning flat black on gloss black. Then there’s gloss black trim on the grille and trim rings on the head and taillights too, plus on a rear trim panel. My buddy Paul suggested all the headlights lacked were fake eyelashes to go completely campy.

Well, that may be a bit much, but onlookers mostly gave the updated MINI an enthusiastic thumbs up. But THEY didn’t get to drive it, and that, mates, is where the fun’s rubber (summer tires here) meets the road.

MINI weighs just a smidge over 3,000 pounds so the S version’s twin-turbo 2.0-liter I4 gives it plenty of oomph with 189 horsepower and a torque rating of 207. Car and Driver reports a 6.2-second run-up from zero to 60 mph. That’s achieved by using a toggle low on the center stack to choose Sport over the Mid or Green power levels. Sport is the fun one and gives the MINI an instant burst of power once you tromp the pedal. Mid is fine for city driving and Green is primarily for show, but aims at gas sipping.

That’s not a big need here as even driving mostly in Sport I managed 28.7 mpg in a mix of city and highway driving. The EPA rates this at 23 mpg city and 33 highway and this MINI prefers higher octane gas for maximum thrust, much as many of us do.

Something younger folks may want to consider is something us oldsters mastered long ago, a 6-speed manual transmission. Not many sports cars, or many cars for that matter, offer a manual tranny anymore, but it makes putting that perky power down to the front-drive wheels a hoot as you work your way from first to sixth gear. I even spun the tires a bit, somewhat aided by damp fall streets.

An automatic is available, but for optimal fun, stick with the stick.

Handling is pure BMW, meaning road feel and feedback is primo and steering response quick. You pay for that a tad in somewhat heavier steering feel, but tossing this through corners on winding country lanes is so much fun you’ll barely notice. My only concern is the thick leather steering wheel, which might be a bit too thick for folks with small hands.

My other performance concern is ride. MINI rides on just a 98.2-inch wheelbase and with sport-oriented suspension the ride is rough, actually jarring at times. Comfort on Midwest roads is not its forte, although find a smooth blacktop highway and/or move to the South or West and pavement punishment will be less problematic.

Beyond the tooshie vibration, MINI’s Vibrasage ride is obvious because the passenger’s seat rattles quite a bit over bumps when no one is seated in it. I tried moving the seat to various notches, but to no avail. The rattle remained.

Otherwise the black leather seats here ($500 extra) are well formed so give good back and hip support. These are manual to save weight, but also provide a bottom cushion extension to help make taller occupants more comfortable, and the front seats are heated. That is part of a massive Iconic Trim package adding $7,500 to the price tag. Note that folks much taller than 6-foot-2 will find headroom more of an issue.

Back seat? Yes there is, but no one with legs will be admitted. This is primarily storage room or could hold a suitcase or two on a trip. The trunk won’t be much help as it is rated 6 cubic feet in the convertible, and that’s being generous. An overnight case or three bags of groceries will fit.

Loading isn’t tough, the rear panel below the black soft top folds down like a tailgate. Inside are two levers that can be released to allow the roof’s lower rear edge to be raised to facilitate easier loading of that MINIscule trunk.

Otherwise the black interior remains its quirky self. Those who have seen prior MINIs will feel at home. A larger 8.8-inch round info screen is now standard, although some space is wasted at the top due to its rectangular info screen being housed in the big round gauge opening.

All that is easy enough to see and use, plus there’s still the knob on the console to quickly scroll through the radio stations. That’s much easier than trying to slide the touchscreen up or down as you drive as it’s a bit touchy.

As for other buttons and controls, they remain much the same as past models with toggles at the bottom of the center stack and some overhead. The steering wheel is somewhat revised with buttons on the hub, but with a tight cockpit this could really use a flat-bottom steering wheel. Also there’s a fold-down armrest between the front seats, but it is best left folded back out of the way, otherwise the driver’s right elbow tends to hit it during shifts.

Safety isn’t neglected, naturally. Driving aids include an active driving assistant system with forward collision, pedestrian and lane departure warning, plus high-beam assist. Rain-sensing wipers are standard and there’s an emergency call system if the car is in an accident. Outside mirrors are heated too.

Also outside you may notice the 2022 MINI has a revised grille and front and rear bumpers, plus sharp new wheels. Combine those spiffy wheels with its bright paint scheme and more than one observer claimed this MINI looked like a Hot Wheels car. That’s all good.

What’s not is the wind and road noise cockpit occupants will hear. Honestly it always sounded like there was an air leak around the tail of the car’s roof, even at moderate speeds. On the highway the truck noise and whoosh of passing cars also were distracting. On a country road, just a bit of tire noise, or if the top was down, well, naturally more wind noise.

Still, if you want a convertible you expect that, although a Mazda MX-5 Miata with hardtop convertible is quieter. Just sayin’!

Note too, the test car’s $7,500 trim package really drove the price up, but it includes a bunch of goodies you may want, from the fancy Harmon/Kardon premium sound system (hard to hear with roof down don’t cha know), summer tires, the manual tranny, a navigation system, heated seats, and body-color mirrors, among others.

So the MINI Cooper S Convertible that started at a modest $32,750, with delivery, ended up at nearly $42 grand. If you can live with fewer options there’s plenty of wiggle room between the two extremes.

Don’t forget that for the value conscious there’s a base MINI Cooper Hardtop Oxford Edition at $20,600. The non-S MINIs come with a 3-cylinder, 1.5-liter engine that makes only 134 horsepower. An S Hardtop starts at $27,750 while the base convertible lists at $28,750.

So there are ways to snag a sassy-looking MINI that various budgets could afford.

Made in: Born, Netherlands