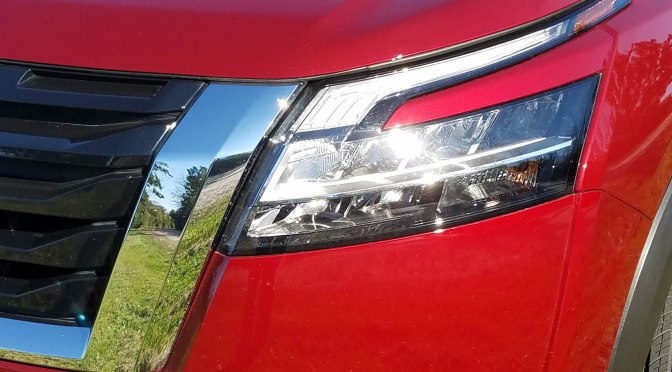 Can mid-size SUVs get any bigger? Well, sure as buyers move away from minivans they find 5-passenger SUVs are too tiny for many of them. Marketing and design folks listen, so here’s another, the 2022 Nissan Pathfinder with a third row.

Pathfinder started out like Ford’s Explorer and Toyota’s 4Runner, to name a few mid-size utes that now, like full-size pickups, have grown large enough for a family of seven, or even eight, if several are wee ones to fill that third row.

Now Nissan would want me to tell you Pathfinder is actually a touch shorter than in 2020, the last previous model year, but it’s miniscule. They also would like me to tell you the third row has more legroom than many, and it does, but still, if second row folks are 6-foot or beyond the third row seats will be fairly snug.

That’s not a complaint, just a warning because I suspect many folks buy that third row as protection, an insurance policy if you will, for the rare occasion they need seating for more than four or five. Think transporting kids to a sports match or movie. Kids 12 and under will fit easily.

Like other SUVs that fancy themselves minivans the Pathfinder has beefed up its fender flares, flattened its hood, widened its stance and pumped it up with bigger tires (20-inchers on the tester). The effect, a muscular SUV look that fits the market and reflects Nissan’s truck, SUV and crossover styles.

But to give Pathfinder some distinction, Nissan now offers two-tone paint jobs, such as the tested top-level Platinum model with 4-wheel-drive. It was a brilliant Scarlet Ember (metallic red) with a Super Black Metallic roof. Sharp!

From a performance standpoint there’s a trusty 3.5-liter V6 under its flattened hood juicing it to the tune of 284 horsepower along with a torque rating of 259. That’s close to the top of the mid-size SUV heap, Kia’s newish Telluride packing 291 horses.

That’s pretty close and means the Pathfinder, with its easy-shifting 9-speed automatic, will do 0-60 mph in 6.7 seconds, darn fine for a ute weighing roughly 4,500 lbs. according to Car and Driver. Gas mileage with the new tranny is respectable too at 21 mpg city and 26 highway according to the EPA. I got 21.5 mpg in a mix.

The Nissan also will tow up to 6,000 pounds too and now includes Trailer Sway Control as standard, a big plus for haulers.

Sadly the pre-production model I tested felt sort of numb on the road as far as handling, but that’s not unusual for mid- and large-utes. There are seven traction modes dialed in atop the console. They range from snow to mud/rut for off-roaders. Sport firmed up the steering some, but didn’t really make it seem any faster off the line or create sporty handling.

Ride is big truck jiggly, especially on raised bumps. Dips were less of a problem, but the bumps and lumps seemed to jar the interior more than I’d expected in a truck with a 114.2-inch wheelbase. An air suspension or more damping for the rear shocks might help.

The good news is that inside the two-tone gray leather interior looks and feels luxurious and the cabin is darned quiet thanks to thicker acoustic glass. There’s just a bit of tire noise on certain pavements.

I liked Pathfinder’s interior styling with the two-tone gray seats, dash, and doors. The dash’s center stack is surrounded by black gloss trim as is half the console, the rest a satin chrome to avoid reflection by the shifter. Dash side air vents features a brushed metal look as do the door release handles and lower door trim. Door armrests are gloss black on top.

Doors and seats look stylish with quilted semi-aniline leather (Platinum trim) to soften their feel, but I felt the butt pocket itself was still a bit firm. Possible that will be improved on production models.

There are all the usual safety bits as Nissan wisely makes Safety Shield 360 standard on all models. That includes lane departure warning (vibrates the steering wheel and buzzes a bit), blind-spot warning, rear cross-traffic alert and front and rear emergency braking plus high-beam headlight assist.

Moving up to the SV trim adds ProPilot the adaptive cruise control and semi-autonomous driving aids, and by the Platinum trim there’s a 10.8-inch head-up display that some feel aids driver safety. It all works and was easy to understand and use.

Standard too are a 9-inch infotainment screen (up from 8 in the two lower levels), a WiFi hotspot, 360-degree camera, a flat-bottom steering wheel, Nissan Connect Services via Sirius XM, wireless Apple Car Play, but not wireless Android Auto.

As mentioned at the outset, the Pathfinder is roomy and now is available with second row captain’s chairs, which the tester had. That limits seating to seven, 2-2-3. But if you go with a bench second row you could squeeze eight folks in. It’s also worth a mention that the second row captain’s chairs slide and tilt at the touch of a side button, or one on the seat back for third row folks to use. Because they slide and tilt in one motion it’s easy to crawl in back using the second row seat to steady yourself climbing aboard.

With the third row in place there’s 16.6 cubic feet of cargo room. That sounds like a lot, but it’s mostly vertical. A cooler will fit as will several bags of groceries. Fold the row three seats down the cargo area is 79.8 cubic feet, on par with most mid-size SUVs. Nissan also provides reasonable under floor storage space to hide valuables.

The tested Platinum started at $49,240, including delivery, and with just a couple minor options hit $50,290. That’s also in the ballpark for top-level mid-size SUVs. The good news is that this is so near luxury that most of us would consider it full-on luxury.