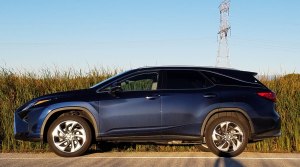 There’s no doubt we’re an entitled society from top to bottom. But when one slides behind the steering wheel of a Lexus RX 350L it’s hard not to feel a strong urge of entitlement, and contentment.

Granted, I’m lucky to get such a chance, but my dark metallic blue (nightfall mica) 350L AWD Luxury model was the right vehicle at the right time for a road trip to northern Wisconsin (the Warrens area) for a slog around a cranberry bog with the family. So four of us settled into the gray and black leather interior, along with our luggage, and simply relaxed.

The 350L is the long version of Lexus’s fancy midsize crossover/sport-ute. It’s 4.3 inches longer than a standard RX 350 and includes a split third row seat that one can power up or down via buttons just inside the ute’s power hatch. That means it’ll seat six unless you opt for a second row bench seat, then seven will fit, although the third row is a tad tight. 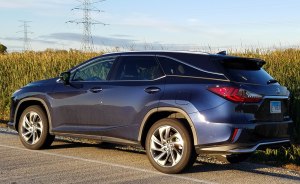 With just four of us, we left those rear seats down and the cargo area behind the second row is deep and wide, plenty of room for fresh cranberries.

The coddling begins immediately though with the RX 350L’s hush-quiet interior. Thanks to its acoustic glass and other sound deadening features, road noise is minimal and wind noise is nil. Its leather seats are soft and comfortably shaped with relatively flat seat bottoms but contoured backs. Oh, and the front seats offer three levels of heat and cooling while the rear seats are heated. Steering wheel? Heated of course.

Front seats are powered and include a three-button memory system for the driver’s seat, too.

More? Side windows in row two have manual sun shades (grandsons love to play with those). There’s a sunroof overhead, albeit only covering the front seat. The steering wheel is a power tilt/telescope model that also powers back and up when the ignition is turned off to ease driver egress.

The infotainment screen mid-dash is absolutely stellar, especially for aging eyes. The screen here is a full 12.3 inches. For once you won’t have to guess what that squiggle on the navigation system’s map means.

Granted that screen is part of a $3,225 package that adds a 15-speaker Mark Levinson premium audio system too, plus Lexus Enform destination assist package. Still, why not take this luxurious crossover/ute to its maximum luxury potential? 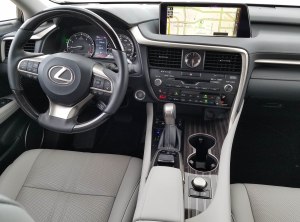 Naturally there are all the safety devices you’d expect, although a blind-spot monitor and park assist, plus automatic braking are part of a $1,865 package. Still, the Lexus comes with smart cruise control, a pre-collision warning system with pedestrian recognition, intelligent high-beam headlights, lane departure alert and steering and lane-keeping assist that engages with cruise control.

I’ve gotten used to that later feature the past year or so via test drives. It helps keep your vehicle centered in its lane. It’s not really needed if you’re an attentive driver, but can be an aid on a long trip where your attention could wander a bit, or if you’ve got unruly kids in the car that are competing for your attention.

You just know this is first rate, from the 290 horsepower that smoothly throbs from its 3.5-liter V6 engine with variable valve timing to its smooth easy handling. The feel is fairly light considering this is a 4,619 lb. vehicle. And yes, there’s a drive mode button that is fine left in Normal, but also has Eco to save fuel and Sport, to use fuel and stiffen the steering effort to near sports sedan levels.

AWD also is standard so the RX 350L will be fine once the snow flies, and that’s a concern in our chilly climate.

Ride is fantastic too, well controlled and well cushioned without feeling too soft and smooshy. Everyone praised this one’s quiet and its ride, a near perfect blend of comfort and road feel. 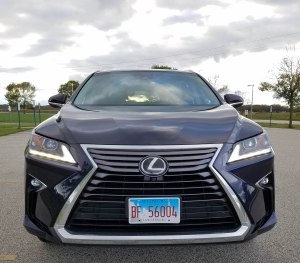 Gas mileage was good too considering this has AWD and is a large, heavy crossover/ute. I got between 23.4 and 24.7 miles per gallon in about 80% highway driving. Both tanks included some city drives, and the lower one included a fair amount of stop-and-go on a loop around suburban Chicago for a day trip. The EPA rates the Lexus at 18 mpg city and 25 highway.

Misses? Sure there are a few, including the touchy console knob to adjust the nav screen and map. But at least there are knobs and buttons now for the radio portion of the info screen.

I also was surprised Lexus doesn’t yet offer either a wireless phone charger or Android Auto and Apple CarPlay in the RX 350L and its various iterations.

The tested SUV/crossover also added second row captain’s chairs for $405, a color head-up display that I could live without for $600 and a touch-free power hatch for $200. The hatch also comes standard with a wiper, an absolute must for any Wisconsin vehicle. 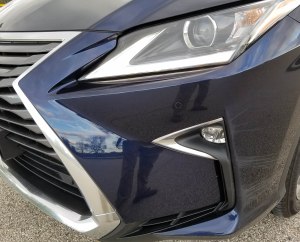 Luxury indeed, and something I could feel entitled to the more I get used to driving it. 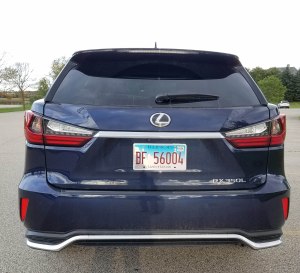 Made in: Miyawaka, Fukuoka, Japan