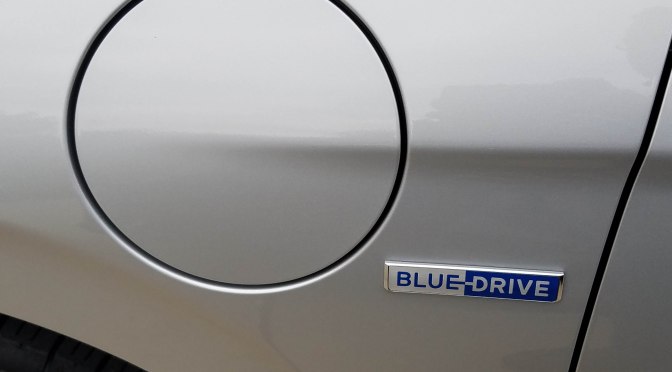 Hyundai hybrid is low cost from the get-go … 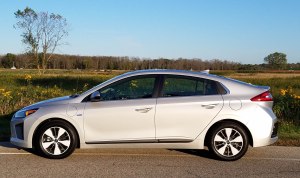 Hybrids in general, and plug-in hybrids in particular, are becoming the way to go for families looking for the best fuel economy, or socially conscious buyers wanting to reduce their carbon footprint.

For instance, this week’s test hybrid, the Hyundai Ioniq (oddly named and spelled), is a plug-in that starts as low as $26,280. For that you get a hatchback that will deliver 52 miles per gallon if it’s running on gas, or 119 mpg when combining gas and electric power, says the EPA.

Mine was a “symphony air silver, Limited, the top-level Ioniq. Even at that, it checked in at just $33,335, a couple grand under the average new car price. It was a pleasant drive, and like all Hyundai models, came with more features than one might expect for that price.

Let’s start with how it drives, because often hybrids get the bad rap of being way underpowered. That can be true, but consider that electric power is instantaneous and torque-heavy.

The compact Ioniq handles nicely with generally light steering effort and good cornering because it has a low center of gravity. In Sport mode the steering firms a bit too. Plus Hyundai says the Ioniq has the best drag coefficient of any car on the U.S. market. That means it cuts through the air more easily, which aids fuel efficiency. Mind you the differences in drag coefficients among most cars is small. 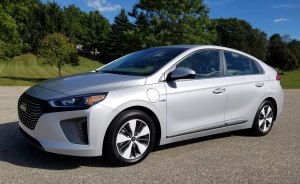 Power comes from a 1.6-liter I4 gas engine coupled to a hybrid system with an electric motor. Combined the system creates 139 horsepower, admittedly mild. But the trick to enjoying an Ioniq drive is moving the gearshift a bit to the left and putting the 6-speed dual-clutch automatic into Sport mode. Suddenly the acceleration comes alive and you zip up to reasonable cruising speeds in a blink. Once up to the desired speed, just shift it back to Normal and let the gas sipping begin.

Want to save as much fuel as possible? Hyundai includes a stop/start feature to turn the car off at stoplights to save a touch more.

Ride is not Ioniq’s forte, even though it rides on a106.3-inch wheelbase. Still, this test car was more comfortable than my test drive several years ago. The car’s front end seems to deal better with our state’s rough road surfaces though, while the rear suspension seems a bit too firm at times. Also, this 2019 Ioniq is about 200 lbs. heavier than the original one I’d driven. That weight may have helped settle the tail, and there was no rattle in back this time either.

Ioniq’s braking is smooth and effective, plus the car comes with traction control and stability control systems. As with other hybrids, the Hyundai’s regenerative braking helps re-power the hybrid system’s lithium-ion polymer battery.

Inside, the silver test car features a gray leather interior with gray leather seats edged in white stitching and gray and white checker piping. The doors and dash are a textured gray plastic that looks clean and more modern than the smooth plastic found in many cars. But there is black gloss trim on the console by the shifter and around the climate controls and matte silver trim on the air vents, steering wheel hub and around the infotainment screen.

Ioniq’s driver’s seat is powered and has two memory buttons, part of a $2,975 Ultimate package here. Seats are mildly contoured and easy to get into a comfortable driving position. The driver also gets a power lumbar support.

Ioniq’s rounded roofline allows for good headroom front and rear so four adults will fit comfortably. Legroom is fine too and the steering wheel is D-shaped, meaning it has a flat bottom, which not only looks sporty, but frees up a bit of knee room that helps when entering and exiting the hatchback. 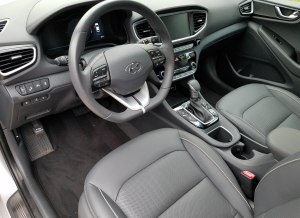 Rear seats also split and fold down to boost the already generous cargo room under the hatch. Like a Prius, that hatch features a split window with a panel that runs horizontally between the regular hatch window and one on the tail, below that panel. This allows for better rear visibility, but looks a little odd and takes some getting used to.

Hyundai’s dash is attractive and functional. Standard is a 7-inch touchscreen, but the Limited adds an 8-incher as part of that Ultimate package. Other goodies in the package include wireless charging for phones, Hyundai’s Blue Link guidance and emergency services system, an Infinity stereo with eight speakers, and rear parking sensors. Plus it adds a power sunroof and special high-intensity headlights that include a bending feature to help while cornering at night. 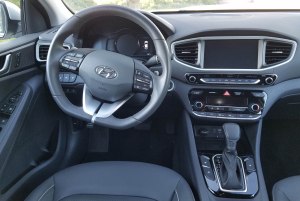 Standard on all Ioniq models is a backup camera and blind-spot detection system, plus automatic emergency braking to help stop, or slow, the car if an obstacle gets in the way. While Android Auto and Apple CarPlay telematic integration systems also are standard so you can link up your phone and other digital devices.

Normal goodies and benefits in the Ioniq include a large open bin just under the center stack that will hold a phone or two, and dual cup holders (no big deal), but one is D-shaped and excellent at holding a cell phone against the flat side so you can glance down and see it easily as you drive. Bluetooth, 7 airbags and dual-zone climate controls also are standard.

There’s also a manual tilt/telescope steering wheel with all the usual radio, phone and trip computer buttons on the hub.

The center dash touchscreen (a split screen) is easy to use and read too. It includes 12 channel presets. There also is a dual climate control system, and among the dash gauges a cool readout that tells you what percentage of your driving has been economy, normal and aggressive. I did well, even with my aggressive Sport mode shifting at stoplights.

Ultimately I got 47.2 mpg, but that was before a full charge, which occurs in about 8 hours on a 110-volt line. Hyundai says using a 220 circuit will fully charge the car in about 3 hours. Once I fully charged the Ioniq I got nearly two days of driving to and from work on the charge, so about 30 miles.

There also is an all-electric Ioniq available for the California market. It gets about 124 miles on a charge and starts about $30,700. California also currently gives a $10,000 tax credit on that car.

Drawbacks? Well, while the Ioniq is better looking than a Prius it still has a similar profile and that odd split rear window that could use a wiper. I also found the A-pillar/mirror design to somewhat obstruct my side view. 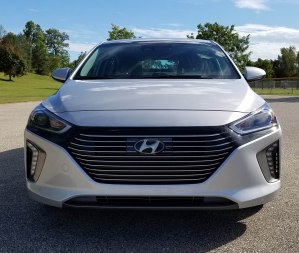 Want even better styling? Hyundai’s sister firm, Kia, offers the Niro on the same platform. It’s a bit more stylish to my eye. But either way, these are fine hybrids that offer mid-range to luxury features at economy prices.

Plus Hyundai retains its 10-year or 100,000-mile warranty, and, get this, a lifetime warranty on the hybrid’s battery system. Winner!