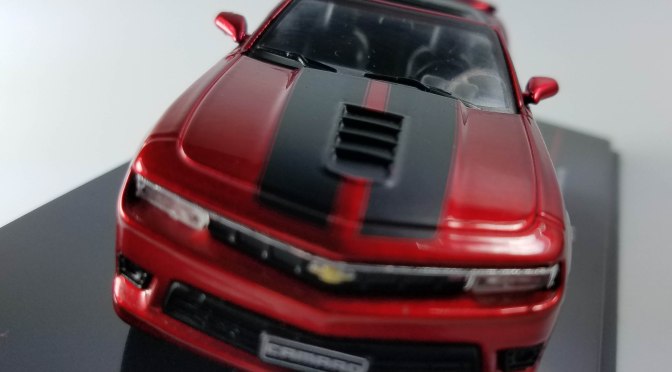 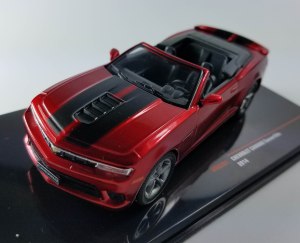 Chevy’s revamped version of the Camaro, launched in 2009, is a beautiful restyling of the classic 1960s muscle machine. Even racier is the convertible version.

Now IXO releases its 1/43 scale model of the 2014 Camaro convertible in a stunning dark metallic red with flat black hood and trunk stripes. This thing looks fast even sitting on a shelf and IXO wisely mounts it on a black plastic inclined base so it looks more dramatic, like it’s about to charge into action.

We all know about Camaros, Chevy’s answer to Ford’s run-away 1960s hit, the Mustang. Yet when it was launched in September of 1966 as a 1967 model, its sales, like Mustang’s, were strong. In fact, Camaro was so popular it was produced in four generations through 2002. Then the model went on hiatus until 2009 when it was reintroduced as a 2010 model. It was even the Indianapolis 500 pace car for that year’s race.

This model is one of those fifth generation Camaros, the 2014 model, which boasted strong power, surprise, surprise. A 323-horsepower V6 was standard, but options went all the way up to a 7.0-liter V8 that made 580 horses in the performance-oriented Z28 edition.

Camaros feature independent suspension at all four corners to aid in handling and ride, and while less retro in styling than the Mustang when re-introduced, Camaro still carried forward much of the original 1960’s car’s styling cues.

A sixth generation Camaro was introduced in May of 2015 as a 2016 model. For the record, the original Camaro was produced through the 1969 model year.

This high-value car is a winner, if you’re either a Camaro or Chevy guy, or gal.

Start with a beautifully sculpted body with strong creased character lines and detailed four-slot black air scoop in the hood. Plus, those two perfectly applied flat black racing stripes hood and trunk. The grille is painted flat black too, as are the air intakes under the bumper, but there’s a fine chrome trim line the spreads over the grille and clear headlights to give the nose an authentic look.

The racy side mirrors are well shaped and there’s a black border on the windshield, inside the body-colored frame. Two thin black wipers also are present.

In back is a Chevy bowtie on the trunk’s facing, just below a nicely shaped spoiler. Taillights contain proper red and white lenses and there are twin dual exhausts under the tail’s black fascia. You also can see those pipes extending into silver mufflers under the car’s tail.

The door handles and the passenger’s side gas cap are cast into the car’s body, but look fine and there’s a silver Camaro logo on each front fender, below the base of the windshield, adding a bit more detail to this model.

Tires are treaded, but not branded, which is fine. And the matte silver wheels are handsome five-spoke models. While behind those big wheels and tires large disc brakes and black calipers are visible.

Inside, the cockpit is gray plastic, slightly matte in appearance, but still a tad too shiny. Yet the seats are well molded as are the door panels and a gray plastic tonneau cover hides the convertible top.

The dash matches the gray interior with matte silver trim on the air vents and dash controls on the center stack down to the console. There’s a black shift lever there along with hand brake. The 3-spoke steering wheel is black with silver on its hub trim and there’s a tiny Chevy bowtie logo at the wheel’s center. Sharp!