Rambler wagon was economical, so is model …

Station Wagons were the SUVs and crossovers of years ago, long before we knew to call them anything but wagons.

And there’s some thinking now in the car world that wagons, which behave much more like cars than trucks, may be on the verge of a comeback. Rumor has it that Millennials prefer the lower-riding wagons to the taller SUVs and CUVs of today. We’ll see.

But for those of us who grew up in the late 1950s and through the 1960s, wagons were what many of the neighbors used to haul around their families and Rambler was known for being economical to buy and run. So it’s not surprising that NEO has added the 1958 Rambler Cross Country 6 wagon to its 1/43 scale die-cast lineup.

This stylish, yet boxy wagon comes in two-tone paint schemes of blue and white or red and white. Each resin model retails for $99.99.

Ramblers were redesigned for 1958, looking less bulky, and unlike many brands station wagons were a big deal at Rambler, making up roughly 50% of its sales. Rambler also was now American Motors Corp. as its Hudson and Nash lines brands were eliminated.

Ramblers always were known as economical high-value compact cars, as was the Custom Cross Country 6, meaning it carried AMC’s new 127-horse overhead valve straight-six engine. The 1958 models also featured quad headlights and new front fenders, plus flared tailfins. Rambler was late to the party on the fins that were so popular in the 1950s.

Unique to Rambler though was its frameless roll-down rear window, and a tailgate that lowered as one piece. Other car makers soon caught on to that. Also unique to Rambler was how it dipped all of its car bodies into primer prior to being given a final coat of paint. This was to help reduce rust, a process other car makers quickly adopted.

The upshot was that Rambler set sales records in 1958, and returned to profitability that helped propel it into the 1960s, and beyond.

Bathed in a bright dark blue and white scheme the review model looked absolutely stately, especially with its fine photo-etched (PE) chrome roof rack at the tail of its slightly rearward slopping roof. 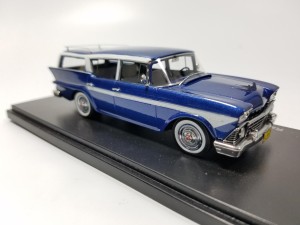 As with other NEO models, the PE trim and chrome on the Rambler is exquisite for the scale. All windows have the PE trim, including small vent windows, and the windshield wipers are thin PE too, as are the finned hood ornaments, and script on the tailgate and Rambler lettering above the grille. Speaking of which, that grille is a chrome masterpiece with flat black between the bars to really make it pop and give it depth.

The hooded quad headlights are chrome trimmed and look realistic as do the red taillights neatly tucked into those elegantly curved rear fins. 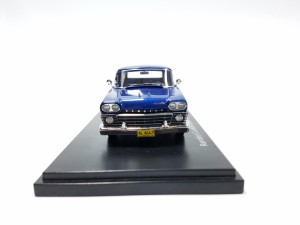 NEO paints a sporty stripe down the car’s side in white and edged in silver, plus a Custom label on each front fender. A gas cap is molded in the driver’s side rear fender, just above that trim line. More chrome appears as door handles, twin rearview mirrors and the tailgate window crank and rear bumper. There’s also a nicely detailed single exhaust and muffler underneath the tail.

Inside, there are blue and white bench seats front and rear, plus door armrests and window cranks on all doors. All windows are posed up, so viewing much more of the interior is a little tough, but you can see there’s some dash detail and a blue steering wheel with chrome horn rim and logo on the hub’s center ring. Inside the tailgate is a blue ribbed cargo floor and you can see the rear wheel cover bulges on each side too.

Overall, another nicely detailed 1/43 American car from NEO and available via American-Excellence.