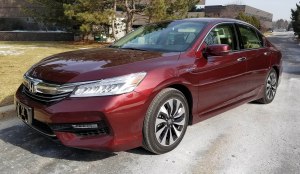 Honda’s Accord is a car that’s hard not to like. It’s comfortable, handles well and provides a first rate ride. There’s room for four or five adults and the trunk is sufficiently large. Sexy it ain’t.

Now add a hybrid power system and well, for many, yawning will ensue.

Honda though has tweaked its 2017 Accord to cut a few pounds, add a little overall length, which aids trunk space, and given it a 16-horsepower boost. Refinement defines the Accord, which has been around now for 40 years. Accord never has been about sexy, it has been about service. Owners get their money’s worth in fuel and design efficiency.

The new Accord hybrid punches up its pony power by 16, now at 212 horses, but still with a modest 129 ft.-lbs. of torque. The tested dark red Accord features a 2.0-liter i-VTEC 4-cylinder gas engine along with a hybrid electric system. Power is applied smoothly via the electronic CVT (continuously variable transmission), and the car is exceedingly quiet, inside and out. 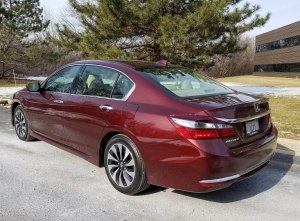 But while the Accord cruises like a champ, it’s still fairly slow away from a stoplight and takes a while to wind up to highway speeds. There’s an Econ button to further slow the shifts to save fuel, but I left the test car in normal mode just for the small boost of power it provided. That said, there IS a Sport button on the console that actually gives the Accord more power away from a stop. You’ll want it engaged, a lot!

Certainly we all know that hybrids are slower off the blocks, but those who buy hybrids are willing to put up with that in favor of impressive fuel mileage, and Accord delivers there.

The hybrid Accord is rated 49 mpg city and 47 mpg highway. I got an amazing 47.7 mpg in about 80% highway driving. That was much better than the 35.2 I’d gotten a few years back in an earlier Accord hybrid in similar driving, albeit this drive was in warmer weather.

I drove the hybrid in Chicago and could keep up with the highway shenanigans there. However, note that as in the previous model, there is some engine growl, or drone, when you ask for more power. The CVT also was smoother shifting than the previous model. 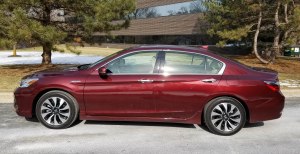 If you’re OK with a hybrid’s power shortage though, you can still enjoy the same driving dynamics as in a standard Accord. Handling is light and easy and the ride is excellent. Taking the Accord over crumbling Wisconsin and Illinois streets wasn’t a hardship. Everything was well controlled and never jolted passengers.

Honda has trimmed 14 lbs. from the previous Accord hybrid and added back a couple inches of length to help with rear seat and trunk space, both a good thing for family sedan buyers.

The test car was the top-level Accord Hybrid Touring model, so was extremely well equipped. The quiet interior featured a full leather interior with black dash and creamy tan leather seats that were fairly flat, wide and firm, but comfortable. Front seats are heated too, but not the steering wheel here. There also are two memory settings for the power driver’s seat. 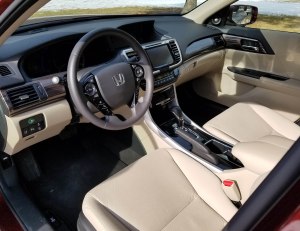 The dash looks attractive and includes two screens, the top provides audio system information and displays the navigation screen when requested. That’s also where the rearview camera shows what’s behind you when the car is in reverse.

The lower screen is just a touchscreen, but unlike previous models there are no pre-set buttons below the screen. This makes it hard to adjust while driving. In fact, this is among the hardest radio systems to use that I’ve encountered in a vehicle for the past several years. Lower level Accords still have the older, easier to use system. Hmmm!

On the plus side, Accord now offers Apple CarPlay and Android Auto as standard. Overhead is a sunroof too and the sun visors slide. Bravo!

The Touring model also is loaded with safety equipment, everything from a rearview camera with cross-traffic sensing, to blind-spot warning system, lane departure, dynamic cruise control and automatic emergency braking. Many of these are part of the Honda Sensing system that is standard on all hybrid models. 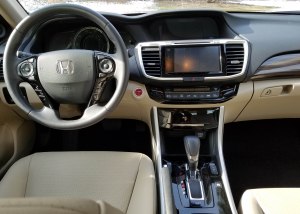 I also like Lane Watch, which is activated when you flip the turn signal for a right turn. A camera in the right outside mirror shows you the curb and a long sweep along that side of the car to ensure you don’t pull over into another vehicle, or clip a curb. Handy!

The hybrid’s trunk is now 13.5 cu.ft., almost a full cubic foot larger than the previous model. You still lose some trunk space in the hybrid, compared with the standard gas-engine only Accord though. The standard model’s trunk is about 16 cu.ft. Also, the hybrid’s rear seat does not fold down to increase storage as batteries are housed below the trunk.

Pricing is in the ballpark of other hybrid sedans, but higher than its main competitor, the Toyota Camry. The base Accord Hybrid starts at $30,480 as opposed to $27,655 for the Camry, both including delivery. Move up to the EX-L and the price increases to $33,780, while the tested Touring model starts at $36,830, including delivery.

Remember too that the gas-only powered Accords come in a variety of trim levels and are economically priced. The base starts at just a bit more than $23,000 and comes with a manual transmission. Base models feature a 2.4-liter I4 with 185 horsepower and 181 torque rating. 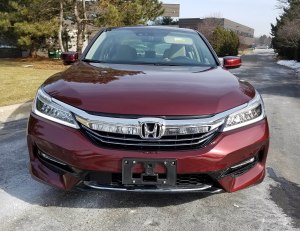 Accords also are available with a 3.5-liter V6 that creates 278 horsepower and a 258 torque rating. EPA ratings are 18 mpg city and 28 mpg highway for the manual. The base model with manual gets 23 mpg city and 32 mpg highway.

Ironically, automatic transmissions have improved to the point that they actually get better gas mileage than the manuals now, by several mpg city and highway. So while the automatic will cost a bit more up front (roughly $1,000), your fuel costs will be lower throughout the car’s life.

Then again, if you go the hybrid route you’ll be beating the heck out of those figures too. 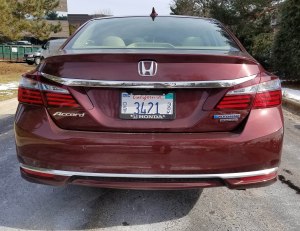 Made in: Marysville, Ohio