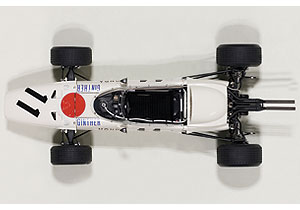 Autoart has created the Honda RA272, Honda’s second F1 racer as it competed in 1965, its first full season on the F1 trail, which was conducted mostly in Europe with European race teams. This 1/18 scale model of the car American Richie Ginther drove to Honda’s first F1 win is a delicate beauty befitting the simplicity of mid-1960s racers. 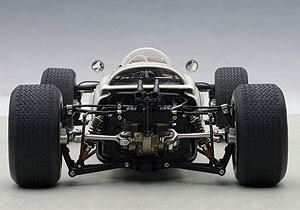 Honda quickly developed its RA271 for the 1964 F1 season and had little luck. American Ronnie Bucknum was the lone driver, but in 1965 Ginther joined the team and Honda kept working on lightening its chassis and heavy water-cooled 48-valve V12 engine.

The car started finishing races, whereas early versions made it to the end of many F1 contests. By season’s end Ginther qualified the high-revving Honda third for the final race, the 1965 Mexican Grand Prix. At an elevation of 2,000 feet, the Mexican track was at the highest altitude of any F1 race that year and perfectly suited Honda’s fuel-injection system. 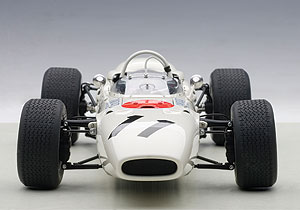 Ginther grabbed the lead early and won for Honda in the manufacturer’s 11th start. Ironically, Ginther was driving car No. 11. Bucknam finished fifth.

Autoart’s F1 Honda is a masterpiece at this price point, and I’m aware it isn’t cheap. The gorgeous white racer with its red Japanese sun just in front of the driver’s cockpit and simple black No. 11 is elegant.

There’s maximum detail here though on such a simple car. Both the nose cone and rear engine cowl are removable. And you’ll want to at least leave the cowl off because the horizontally laid V12 is beautifully detailed with a maze of electrical wiring winding above the engine’s headers and stacks. Plus black tailpipes snake around behind the engine and funnel into the two main exhaust pipes. THIS is what race cars are supposed to look like!

The black suspension supports front and rear connect to the radiator and chassis with small perfectly detailed bolts and the black springs over red shocks in back resemble fine jewelry. Brake lines and rotors are inside each racing wheel hub and the treaded (yes, race tires were treaded in ‘65) tires are properly marked as Goodyears.

Wiring runs alongside the top of the cockpit and some wiring is visible behind the cockpit’s dash that includes finely detailed gauges. There’s a black leather-look plastic seat in the cockpit and a small shift lever on the driver’s right side. The windscreen is clear and properly low and thin with two side mirrors just outside it on the body, A windscreen extension also is bolted on top of the windscreen, plus there’s a thin white roll bar behind the driver’s seat.

Also impressive, the model comes with tiny screws to attach the nose cone to maintain its realistic appearance.

With 529 parts making up the Honda RA272, more than half being metal, it’s easy to see the quality in this Autoart model. Let’s hope Autoart turns its attention to some other 1960s and early 1970s era F1 racers. I’m thinking Jackie Stewart Matra! 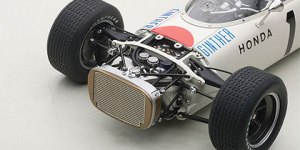