Graham Hill, a Formula 1 world champion, was the surprise winner of the 1966 Indianapolis 500, just a year after Jim Clark, with the same credentials, had won.

But it was Clark and his STP crew that were surprised by Hill’s win, thinking they had won.

For me, a kid who grew up in Indianapolis watching Lotus and Lola redefine what an IndyCar is during the mid-1960s, these were the most beautiful race cars ever.

Loved Indy’s roadsters, but 1966 was just the second year a rear-engine racer won the Indianapolis 500 and it was England’s Graham Hill at the wheel. The British Invasion was more than just the Beatles! END_OF_DOCUMENT_TOKEN_TO_BE_REPLACED

A benefit I didn’t even know about in the beginning

Like the millions of other families all over the world we became Amazon Prime subscribers because of the special deals and many times free shipping. But it wasn’t until my wife and I gave each other a brand new 65 inch smart TV for Christmas which just happened to be an Amazon Prime Fire Edition. I was just excited about getting the TV END_OF_DOCUMENT_TOKEN_TO_BE_REPLACED

Autoart has created the Honda RA272, Honda’s second F1 racer as it competed in 1965, its first full season on the F1 trail, which was conducted mostly in Europe with European race teams. This 1/18 scale model of the car American Richie Ginther drove to Honda’s first F1 win is a delicate beauty befitting the simplicity of mid-1960s racers. END_OF_DOCUMENT_TOKEN_TO_BE_REPLACED 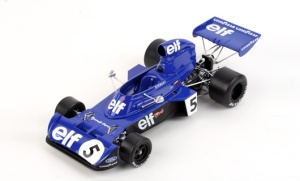 Picture a blue open wheel racer with Elf sponsorship and you likely think of Jackie Stewart in a Tyrrell F1 car circa the early 1970s.

No wonder then that TSM Models created that car, the Tyrrell 006 in 1:18 scale to tempt Formula 1 and open wheel racing fans. This was the car that Stewart wheeled to his third and final F1 World Championship in 1973. Stewart won 6 F1 races in his final season and 27 overall, a record at the time he retired to become a TV commentator, author and business spokesperson.

Everyone knows Jackie Stewart and race fans of a certain age loved the look of the 1970s F1 racers, back when ground effects were new and took varying shapes. Here the front and rear wings are large, but look planned. In the late 1960s and early ‘70s the wings often looked odd or like they were thrown on just before the race to see IF they would help.

TSM’s Tyrrell is the car Stewart drove to victory in the 1973 Belgian Grand Prix, the No. 5 with just the Elf, Ford, Motorcraft (a Ford auto parts brand) and Goodyear sponsorship decals, plus the Team Tyrrell logo. At that, the car is beautiful in its simplicity, even though its shape is interesting, to say the least. END_OF_DOCUMENT_TOKEN_TO_BE_REPLACED