So, naming an experimental or concept car the XP-700 seems natural enough, and that’s what Chevrolet did with its body styling experiment for Corvette on the 1959 auto show circuit. The XP featured a wide-mouthed, low-slung Ferrari-style nose protruding from the already recognizable quad headlights in rounded fenders that Corvette introduced in its 1958 model. END_OF_DOCUMENT_TOKEN_TO_BE_REPLACED

Ferrari’s Lancia spinoff a beauty of its own redesign …

If you’re a connoisseur of vintage Formula 1 cars you may be synched with the differences between the Lancia D50 and Ferrari D50 and how they are linked.

CMC knows its stuff when it comes to F1 cars and so once it produced the Lancia D50 it wasn’t a huge stretch that it would create the Ferrari model. Now it has, again in 1/18 scale, and again a museum-quality build.

Our review model was the first offering in this line, the unmarked Ferrari D50, model No. M-180. Naturally it’s a bright shiny Ferrari red with prancing horse logos on either side of the cowl, just in front of the cockpit. END_OF_DOCUMENT_TOKEN_TO_BE_REPLACED

Lancia was a late-comer to Formula 1 racing after World War II, but it had the genius of engineer  Vitorrio Jano as its secret weapon. He had created the successful Alfa Romeo 8C pre-war.

So in late 1954 Lancia’s beautiful and unusual D50 joined the F1 circuit for the last race of the season, the Spanish Grand Prix where 2-time world driving champ Alberto Ascari put it on the pole with the fastest time.

While setting a fast pace with a record lap, it wasn’t reliable and lasted only 9 laps. But what had captured the racing public’s interest and other designers’ attention was its design with two outrigged pannier gas tanks, its off-center engine mount and low seating position to better distribute weight.

Now CMC nails the design in 1/18 scale with another hand-built metal die-cast model consisting of 1,598 parts, and no, I didn’t count them all.

Gianni Lancia wanted to be a part of the F1 racing world so had Vano design the radical D50. Unfortunately it basically bankrupted his car manufacturing company by mid-1955 and he handed over the team to Enzo Ferrari. END_OF_DOCUMENT_TOKEN_TO_BE_REPLACED

Autoart has created the Honda RA272, Honda’s second F1 racer as it competed in 1965, its first full season on the F1 trail, which was conducted mostly in Europe with European race teams. This 1/18 scale model of the car American Richie Ginther drove to Honda’s first F1 win is a delicate beauty befitting the simplicity of mid-1960s racers. END_OF_DOCUMENT_TOKEN_TO_BE_REPLACED 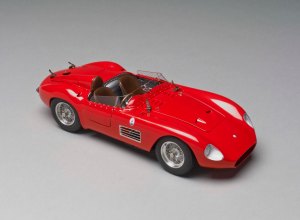 The 1956 model that CMC recently unveiled featured a twin-plug inline 6-cylinder engine with 3 Weber carbs and a hearty 245 horsepower that could propel it from 0-60 in about five seconds with a top speed of 180 mph. THAT was moving in the mid-’50s. END_OF_DOCUMENT_TOKEN_TO_BE_REPLACED