The 1956 model that CMC recently unveiled featured a twin-plug inline 6-cylinder engine with 3 Weber carbs and a hearty 245 horsepower that could propel it from 0-60 in about five seconds with a top speed of 180 mph. THAT was moving in the mid-’50s. 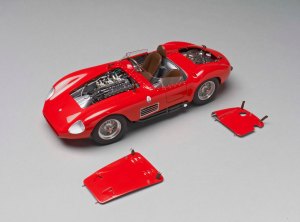 The 300S’s aluminum body, created by Medardo Fantuzzi, sat on a steel tube frame and there were hydraulic drum brakes front and rear and it rode on Dunlop tires. The rear-drive racer had unequal wishbone suspension up front and a DeDion rear axle with semi-elliptical leaf springs in back.

These were sporty little racers, riding on a 90.9-inch wheelbase, similar to today’s original Mazda Miata, but only 28 were made and raced between 1955 and ’58.

Historically these ran in the World Sportscar Championship and finished second overall in 1956. Among its biggest wins was the 1956 race at the giant German Nurburgring track and World Champion Juan Manuel Fangio’s 1955 win in the Venezuelan Grand Prix. Later some of these Maseratis were raced in the U.S.

Up close and personal

There is always a WOW factor with any CMC model and this Maserati is no different. The execution of the Maserati’s smooth sensuous curves and rich red paint job make this devilishly stunning visually, especially with Maserati’s patented pitchfork-like Trident logo on the grille.

But the devil truly is in the details here. CMC hand-assembles hundreds of tiny parts, again blowing away the competition with its perfect wire-spoked wheels with tiny air valves. Tires are treaded racing Dunlops, appropriately labeled.

Headlights are deep-set and realistic looking with three small rivets appearing to hold on the big protective lenses. There are brown plastic hood and trunk belts to hold those opening elements in place. In earlier CMC models some of these were still leather, or at least looked more leather-like.

Another standout on CMC models is just how much of the model is functional. Here there is a small air vent door that opens on the driver’s side fender and gas caps that open from small holes on the rear deck. The tiny half doors with riveted on side windscreens also open and securely latch shut with a click. I used to own a real Plymouth Duster whose doors didn’t sound this solid.

The CMC Maserati also features knock-off spinners to hold on the wheels. You can take any of those off for display too, and doing so reveals the racer’s nicely machined drum brakes. 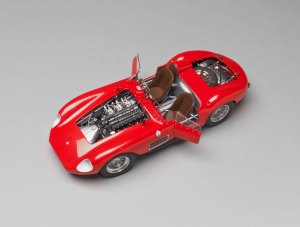 Under the hood is the straight-six Maserati engine, with the car company’s name engraved on the header, plus other fine detailing, including the Weber carbs along with all wiring and plumbing. Under the rear bonnet is a tire and super detailed gas tank.

While you may want to use a glove when handling the Maserati to avoid marring its finish, folks WILL want to turn it over. The undercarriage is spectacular with fine detailing of the entire front and rear suspensions. You can see the transverse gearbox and DeDion rear axle, and of course the exhaust system.

The interior is exquisite too, with a wood-look steering wheel and unfinished aluminum interior with finely detailed shifter and linkage along with cabling in the doors. The black dash face is alive with readable gauges and detailed buttons and knobs. Seats appear to be brown leather as is the headrest behind the driver.

One thing is for certain, CMC models (because of their price) are NOT for everyone. If you can afford one and love the gorgeous lines of the Maserati, this is a primo selection.

See this and more Maseratis at Racing Heroes. 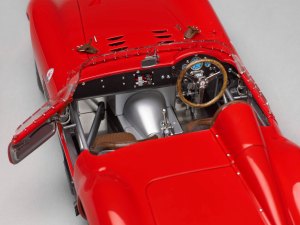