The late 1930s and early 1940s saw race cars developing quickly into what we would consider modern racers and Wilbur Shaw and his Boyle Special, a Maserati 8CTF, led the way at the Indianapolis 500, but others followed quickly.

In 1939 Shaw won the 500 in his Maserati with its 365-horsepower 3.0-liter straight-8 supercharged engine, and to put an exclamation point on it, repeated the win in 1940 and darned near did it again in 1941, the last 500 before WWII. But it didn’t take his competitors long to figure out Italy’s horsey Maserati grand prix cars with their lightweight aluminum bodies could conquer Indy.

END_OF_DOCUMENT_TOKEN_TO_BE_REPLACED 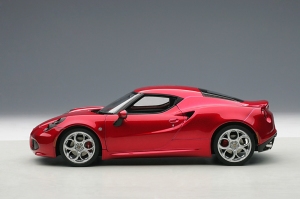 Alfa Romeo has come and gone and come again to the U.S. market, but it has held a special place in the hearts of performance-oriented drivers in Europe consistently for 100+ years.

Now Alfa is back at it with the 4C in the United States, sold through its Fiat dealerships. Finally, Alfa has a sexy sports coupe to rekindle some of the excitement the brand carried here in the 1950s and ’60s.

Lucky us, since we can’t afford a motorized Alfa, Autoart has created a spiffy 1/18 scale version using its new composite material that looks as good, or better, than its die-cast models of the past.

Alfa has a long history with about as many twists and turns as an Italian Alpine mountain road has switchbacks. END_OF_DOCUMENT_TOKEN_TO_BE_REPLACED

Alfa Romeo has come and gone and come again to the U.S. market, but it has held a special place in the hearts of performance-oriented drivers in Europe consistently for 100+ years.

Now Alfa is back at it with the 4C in the United States, sold through its Fiat dealerships. Finally, Alfa has a sexy sports coupe to rekindle some of the excitement the brand carried here in the 1950s and ’60s.

END_OF_DOCUMENT_TOKEN_TO_BE_REPLACED

Mark and I would have loved to have made the trip to Geneva. Plenty of  announcements, like the 2016 Nissan Juke. Don’t get all excited here because it still looks weird. Read more here.

Maserati unveiled the Alfieri, a 2+2 concept car, a 100% functional prototype that says much about the design DNA of future Maseratis. I think this looks so much better than what Maserati has out now but still like a lot of other cars.

McLarens on the other had have a look all to themselves. I got to sit in one at the Chicago Auto Show. Introduced at Geneva is an open-top 650S joining the 650S coupe. Boy would I love to have one of these.

Jaguar confirmed the name of their all-new sports sedan coming to the U.S. in 2016, the XE. Another car on my list I would love to own simply because it’s a Jag.

Last but not least is Jeeps new entry into the small SUV segment, the Renegade. Great name from the past and I hope it lives up to it. I really like the styling but will wait to give it my blessing until I have a chance to drive one. This will be the first Jeep not built in Toledo or Detroit since the hookup with Fiat. The final assembly location for the Renegade will be at the Melfi Assembly Plant located in Italy built off a Fiat platform. We’ll see.

It used to be you and me as part of Obama’s green energy push but we’re off the hook now, and out the money, because the new owner is…..wait for it….China’s Wanxiang Group with a $149.2 million bid. Cool cars but the market is not ready for this type of technology despite what the White House says. I’m showing my political side here. Sure I believe in climate change, it changes every day. Today here in Milwaukee, it’s 45 and sunny. Tomorrow it will be 40 and rain. As an FYI, buddy Mark is on the exact opposite side. We love to disagree! Read more, not about us, the car.

In other automotive news, and politics aside

McLaren releases first images of their 650S coupe prior the reveal in Geneva. Wish Mark and I could attend that one. Read about it here.

Did you hear about the sinkhole that sucked in a bunch of Corvettes at the National Corvette Museum a couple of weeks ago. Pretty wild and sad at the same time. But they will be back thanks to GM who’s pitching in to bring them back to their glory.

Audi has a new car coming out, their S3 Cabriolet, a drop top which seats four. Come on Powerball and that baby would be sitting right in my garage.

The 1956 model that CMC recently unveiled featured a twin-plug inline 6-cylinder engine with 3 Weber carbs and a hearty 245 horsepower that could propel it from 0-60 in about five seconds with a top speed of 180 mph. THAT was moving in the mid-’50s. END_OF_DOCUMENT_TOKEN_TO_BE_REPLACED