So, naming an experimental or concept car the XP-700 seems natural enough, and that’s what Chevrolet did with its body styling experiment for Corvette on the 1959 auto show circuit. The XP featured a wide-mouthed, low-slung Ferrari-style nose protruding from the already recognizable quad headlights in rounded fenders that Corvette introduced in its 1958 model. 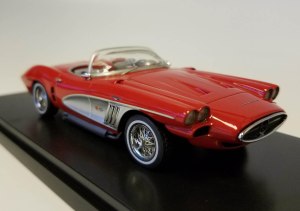 But out back, the Corvette concept went without the fins housing jet-like pointed taillights. The XP-700 moving on to a smooth looking rear deck and four taillights below the bumper/trunk seam. We’d see that again in the 1961 Corvette and similarities carried over to the C2 Vette.

NEO presents this concept car now in 1/43 scale, and while that nose is jarring to look at, the model is a sharp depiction of where Corvette was headed after the C1.

Word is that Bill Mitchell, GM’s then vice president of styling, had the XP-700 custom-made for him and then after driving it a year, had it revised to hit the car show circuit. Indeed, the elliptical grille and nose styling was “borrowed” from a Ferrari, and a bubble-top roof was added to the convertible for the car shows.

The NEO model represents the early 1958 XP-700 that Mitchell drove. The later version was painted silver in 1959 and the bubble-top was added. This car packed a small-block 283 cubic-inch engine with just 230 horsepower, and a four-speed manual transmission.

GM styling folks said the car had a Grand Prix look to its styling with that nose, wire wheels and big air scoops alongside the nose. We’ll let you be the judge, but it certainly is a mixed bag that grabs

With its long nose and beautiful wire wheels it’s not hard to see the European influence oozing from Chevy’s XP-700. Looking at the concept, but overlooking the nose, you easily see 1960s Corvette styling that was encouraged by this experimental roadster.

I’ve always been a sucker for the scallops in the Corvette’s sides and this one is a sexy silver that perfectly accents the car’s bright red paint scheme. The car also boasts three vents cut in the front of the scallops, adding a little more excitement.

Just behind the doors are a couple smaller air scoops to cool the rear brakes and then down below the doors are classic twin silver side pipes.

This 1/43 scale model also features photo-etched script Corvette nameplates on the nose and tail, and the famous Vette crossed flags logo on the trunk and grille. The fine wire wheels are spectacular here and the model features unbranded white-sidewall tires to up its sporty flair.

Bullet-shaped chrome mirrors sit atop the doors on either side of the windshield and there are chrome door handles, gas cap, antenna stub and thin protective bumpers on the rear fenders. 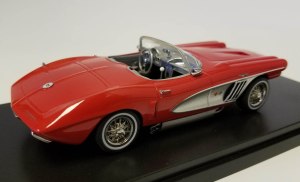 Again, a sharp model from NEO with good body shape, stellar paint job and fine details. For the first time in our memory though this snazzy 1/43 model creeps above $100.