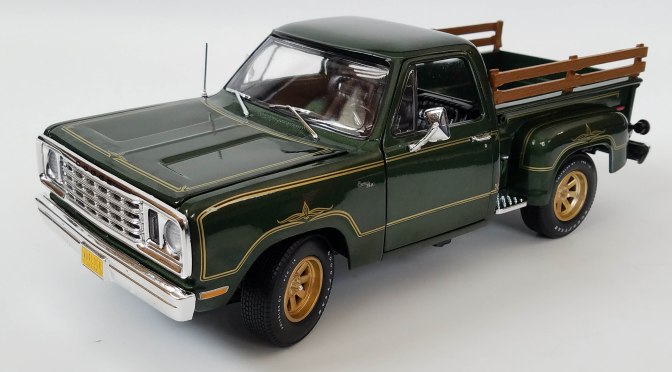 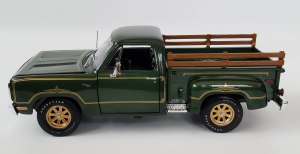 I have to admit that when I heard Auto World was releasing the 1977 Dodge Warlock I was confused. I’d never heard of it, and I pride myself in being a pretty heady car guy.

Of course, it’s a truck.

Still, in 1977 I was just out of school, just married and my vehicle tastes were fuel-efficient small cars that didn’t cost much, think Mazda GLC, Datsun B210, Honda Civic, and Plymouth Horizon. OK, I was smart enough to avoid the later. 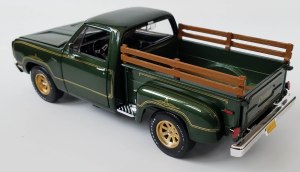 So I did a little digging on the Warlock, a name that no doubt would be nixed by any marketing person today. Seems Dodge was ahead of the curve with factory-produced custom pickups. Now any pickup, custom or not, is hotter than a Kardashian’s bikini photo. END_OF_DOCUMENT_TOKEN_TO_BE_REPLACED 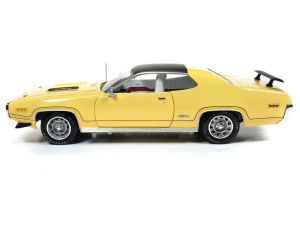 My neighborhood was packed with Road Runners back in the early 1970s, in no small part because we had one of the top-selling Chrysler-Plymouth dealerships in Indiana a few blocks from my house.

The wild fruity colors of the late 1960s and early ‘70s lit up the dealer’s lot, and us pre-teens and teens loved circling the lot on our bikes picking out what we just “knew” we’d own, once that $1.50-an-hour bus boy job came through down at the Chuckwagon restaurant. They were sweet dreams to be sure. END_OF_DOCUMENT_TOKEN_TO_BE_REPLACED 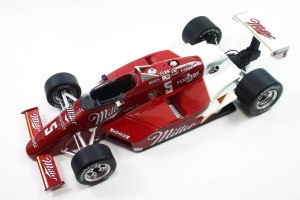 The March chassis was a dominant one in Indycar racing during the 1980s, and it was a beautiful racer.

That’s what makes Replicarz’s new 1/18 scale March 85C, the Miller beer-sponsored red and white beauty driven to the Indy 500 win by Danny Sullivan in 1985, such a winner. END_OF_DOCUMENT_TOKEN_TO_BE_REPLACED

Autoart has created the Honda RA272, Honda’s second F1 racer as it competed in 1965, its first full season on the F1 trail, which was conducted mostly in Europe with European race teams. This 1/18 scale model of the car American Richie Ginther drove to Honda’s first F1 win is a delicate beauty befitting the simplicity of mid-1960s racers. END_OF_DOCUMENT_TOKEN_TO_BE_REPLACED

Replicarz’s latest Foyt Coyote a winner, except at Indy …

A.J. Foyt epitomizes the Indianapolis 500. He’s a legend and his cars embody that legendary status too, even those that didn’t carry him to one of his record four Indy wins in 35 tries.

Replicarz continues to expand its impressive 1/18 scale Indy 500 collection with Foyt’s pole-winning Coyote from 1974, back when all the racers looked a bit different as each driver, mechanic and car builder experimented with wings for downforce and radiator positioning for proper engine cooling.

Foyt’s Coyotes of the 1970s all had similar features, but for varied from year to year, the only constant being their glowing orange paint schemes and the Gilmore Racing sponsorship along with A.J.’s traditional No. 14.

Foyt won the Indy pole in 1974 with a speed of 191 mph and had the speed to win on race day. He led 70 laps, second only to winner Johnny Rutherford, and controlled much of the first half of the race. He had just repassed Rutherford about 139 laps into the race when his Coyote started to smoke. END_OF_DOCUMENT_TOKEN_TO_BE_REPLACED

Eye-catching paint job and high value for this Camaro SS

I learned to drive a stick shift on my Uncle Wink’s 1967 Camaro SS, so I’ll forever have a soft spot for 1960s Camaros. Auto World seems to too, creating numerous muscular 1960s die-cast Camaros in various scales.

Serious model car builders love their muscle in 1/24 scale and Auto World now delivers a handsome 1969 Camaro SS in bright orange in that scale. This isn’t as detailed as Auto World’s fine American Muscle series in 1/18 scale, but the body is well shaped and the car has the aggressive Camaro stance. Pricing is value minded too and there’s a lot to like about that.

Chevy’s Camaro was launched in fall of 1966 to compete with Ford’s exceedingly popular Mustang. Camaro and Mustang were affordable sports cars, which we later decided were muscle, or pony cars.

END_OF_DOCUMENT_TOKEN_TO_BE_REPLACED

In today’s world where the speed of sound bites being delivered via every digital medium is of utmost importance, it’s difficult to imagine the days when men driving cars at record speeds would grab newspaper headlines. Nowadays even newspapers are passe!

But Mickey Thompson was a headline grabber from his days as a drag racer to setting land speed records on the Bonneville Salt Flats to designing race cars for the Indianapolis 500 to his murder in 1978.

It was his land speed record attempts that put him in the nation’s eye as he created streamlined four-wheeled beasts to challenge the existing speed record of 394 mph set after World War II by Britain’s John Cobb. Now Replicarz delivers two beautiful sealed body, cast resin renditions of Thompson’s Challenger 1 racers in 1/18 scale.

Picture a blue open wheel racer with Elf sponsorship and you likely think of Jackie Stewart in a Tyrrell F1 car circa the early 1970s.

No wonder then that TSM Models created that car, the Tyrrell 006 in 1:18 scale to tempt Formula 1 and open wheel racing fans. This was the car that Stewart wheeled to his third and final F1 World Championship in 1973. Stewart won 6 F1 races in his final season and 27 overall, a record at the time he retired to become a TV commentator, author and business spokesperson.

Everyone knows Jackie Stewart and race fans of a certain age loved the look of the 1970s F1 racers, back when ground effects were new and took varying shapes. Here the front and rear wings are large, but look planned. In the late 1960s and early ‘70s the wings often looked odd or like they were thrown on just before the race to see IF they would help.

TSM’s Tyrrell is the car Stewart drove to victory in the 1973 Belgian Grand Prix, the No. 5 with just the Elf, Ford, Motorcraft (a Ford auto parts brand) and Goodyear sponsorship decals, plus the Team Tyrrell logo. At that, the car is beautiful in its simplicity, even though its shape is interesting, to say the least. END_OF_DOCUMENT_TOKEN_TO_BE_REPLACED

American Muscle came in various shapes and sizes in the late 1960s and early 1970s, before the first oil embargo put the nix on giant V-8s and the awesome grumble and power they delivered.

Now Auto World creates a beautiful 1971 Plymouth Road Runner in Petty Blue with white vinyl top (remember those?) in 1:18 scale. This is part of the aptly named American Muscle lineup that retails at roughly $80-85, a good price for this scale considering some 1:43 scale diecast and resin models are approaching that price range.

An advantage here too is that the doors, hood and trunk all open, so you can easily see the interior, a bright blue in the sample car, plus the well detailed V-8 under its long hood with black Air Grabber scoop.

Road Runners were fast, on- or off-track, and yes, Richard Petty, the King of NASCAR, successfully raced one in 1971. Auto World makes that one too. END_OF_DOCUMENT_TOKEN_TO_BE_REPLACED