In today’s world where the speed of sound bites being delivered via every digital medium is of utmost importance, it’s difficult to imagine the days when men driving cars at record speeds would grab newspaper headlines. Nowadays even newspapers are passe!

But Mickey Thompson was a headline grabber from his days as a drag racer to setting land speed records on the Bonneville Salt Flats to designing race cars for the Indianapolis 500 to his murder in 1978.

It was his land speed record attempts that put him in the nation’s eye as he created streamlined four-wheeled beasts to challenge the existing speed record of 394 mph set after World War II by Britain’s John Cobb. Now Replicarz delivers two beautiful sealed body, cast resin renditions of Thompson’s Challenger 1 racers in 1/18 scale.

Why two models? Here’s the scoop.

Thompson began his rapid record runs in 1959 with a slick powder blue Challenger 1, earning Thompson the 1959 Hot Rod Champion of the Year as he eclipsed 360 mph. The car featured four Pontiac engines and four synchronized 1937 Cadillac transmissions. Horsepower was estimated at 2040. Reportedly he could get this first Challenger up to 210 mph in first gear and roughly 325 in second before shifting to high gear.

After a number of test runs, some to test the racer’s parachute deployment, Thompson set a top mark of 362.120 mph in a one-way run and 330.5125 mph average for a two-way run, the fastest times ever at the Bonneville National Speed Trials. But Thompson was only part way to his goal and came back in 1960 with a redesigned dark metallic blue Challenger 1 with superchargers to further increase the four engines’ power and enclosed front wheels for aerodynamics.

Before he had begun his speed run efforts, Thompson, an astute fund-raiser, had signed Goodyear as a tire sponsor. Not only did they provide funding, but developed the tires expected to give a 400+ mph car traction and not burst. They worked! He also had Mobil and Champion sparkplugs as sponsors initially and later Grant piston rings and Iskenderian racing cams.

The 1960-62 Challenger 1’s redesigned body featured large hood scoops to provide the superchargers with the air they needed to create maximum power. The tradeoff was the scoops provided more wind resistance, a key factor at extreme speeds, but the air they fed to the superchargers was necessary for the power to hit 400 mph and break the speed record.

That finally occurred Sept. 9, 1960 when Thompson made a one-way run of 406.6 mph breaking Cobb’s record by more than 10 mph. However, Thompson had mechanical difficulties, reportedly one blown engine, and his return run was considerably slower, all things being relative. His two-way average of 3??, was not a record. Still, he was the first man to drive a car more than 400 mph. Subsequent tests and runs could not better his record mark, but when he retired in 1962 he held roughly 100 speed records.

Replicarz, which has honed its design and build skills on its 1/18 and 1/43 scale Indy Cars, delivers stellar paint jobs on the beautifully shaped resin racers. Paint work on the pre-production models was flawless.

Graphics work is crisp and well executed too. With Mickey Thompson’s name, Challenger 1 and the Goodyear, Mobil and Champion logos gracing the sides and nose. Overall the models are each 13 inches long, so make a stunning display.

There are variations between the two, including what appear to be bolted on front wheel covers on the dark blue model, different nose and tail venting and scoops, plus the giant tube-like air scoops on the later version. I like the original light blue model’s lines best, and its silver disc wheel covers enhancing this lean machine’s futuristic looks.

Both are beautifully executed and stunning visually. Also, both are limited runs, like the original. No total production numbers have been announced. 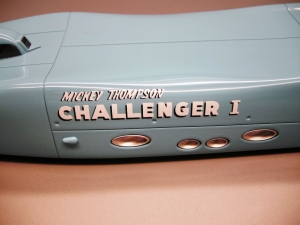