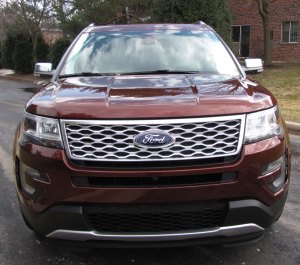 Long gone is the truck-based Ford Explorer that fueled the SUV craze that begot today’s crossover craze. The 2016 Explorer while tall and muscular is car-based and luxurious, which explains both its popularity and in the tested unit’s Platinum trim, its price.

But you’ll feel you’ve hit the lottery driving this version. It has everything on it from supremely soft (they call it Nirvana) leather seats to a leather-wrapped instrument panel and dash top, twin sunroofs, front parking sensors and camera, Sync, massaging seats, power-folding third-row seats and Ford’s MyKey. That feature allows you to set the vehicle’s top speed, ostensibly to prevent your rowdy teens from driving crazy fast.

That would be likely too, because the Platinum edition comes with a twin-turbo 3.5-liter EcoBoost V6 that delivers a robust 365 horsepower. Power is excellent and well used via the 6-speed automatic with SelectShift, that allows you to manually shift the gears, no clutch required.

With a considerable 112.6-inch wheelbase and touting 4,901 lbs. of girth, the Explorer also delivers an extremely comfortable ride, which is coupled with a luxury-quiet interior. Railroad tracks are but a mere pimple on the road. However, sharp tall bumps deliver a bit of jostle.

Going on a long road trip? This is what you and the family would like to have for sheer comfort.

Handling is fine, but not sporty as in the Escape I drove the prior week. Steering effort is moderately heavy with minor wheel play, easy to control in city or on highway. Naturally a mid-size ute like this is less than nimble in a parking lot. But with the rearview camera and front parking sensors, you can slide Explorer into most grocery lots simply enough.

Braking is fine and the Terrain Management System, controlled by a dial atop the console, allows you to set the four wheels into traction mode for snow, mud, sand, etc. It’s easy to use and provides options if you do intend to go off the road, or are towing a boat or camper (you can tow up to 5,000 lbs.) to a lake or woods where you may get into some muck.

Inside is where you’ll be spending your time though and it’s quiet and comfy. The fancy leather seats are creamy soft and help absorb intrusive sounds. 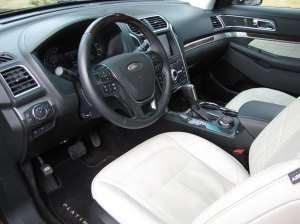 Best yet, Ford has abandoned its previous touch-sensitive dash controls in favor of buttons and a few dials. Bravo! Plus the 10-inch touchscreen for radio and navigation is easy to use, and get this, actually works if you use it while wearing gloves. Hurrah for us Wisconsinites that often require gloves for winter driving.

That said, the Platinum Explorer does coddle a bit more with a heated steering wheel. (Once you’ve had one you’ll never go back!) Plus the front seats have three-level heating and cooling. The seats are powered too and the driver’s seat has three memory settings.

My only complaint for the supple front seats is a rather snug butt pocket. I’m no chunky hipster, but this was tight enough it might be tiresome on a long drive.

While on the seat topic, the test Explorer came with second row bucket seats, which passengers praised. A three-person bench is standard. Behind the second row is a bench seat that splits and powers down to increase storage, but you could haul three adults fairly comfortably. The third-row power buttons are just inside the power rear hatch and are simple to use. 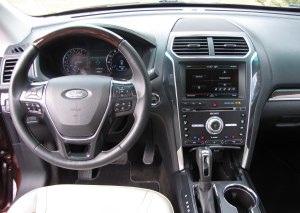 Overhead are dual sunroofs, plus thick visors that slide and the driver’s visor includes HomeLink buttons.

All praise to Ford for quickly abandoning its touchy dash controls. These buttons are much more usable while driving. Now radio functions and climate controls can be easily used again. Yet many also are available through the 10-inch touchscreen mid-dash, for those who want to program some functions before starting to roll.

The tilt-telescope steering wheel is powered and a button on the steering column also lets the driver adjust the brake and accelerator pedals’ height. Explorer also has push-button start.

There are the now expected safety devices too, such as blind-spot warning, parking sensors and all that. Lane departure is here too, but can be switched off, although it took me a few days to figure out how.

While most controls are simple enough for a driver to use while in motion, I recommend only futzing with the trip computer while parked. It requires a complex series of screen switches and scrolls to find much of anything you may want to check, or adjust.

Explorer like nearly all SUVs and crossovers has giant A-pillars that somewhat hinder your sight lines. All the safety sensors help alleviate that, plus Ford lowers the big side mirrors a bit to give a little visibility between those and the A-pillar.

Other goodies include lighted cup holders and door sill plates, plus you can adjust the color to suit your mood. The glove box also is large as is the storage box between the front seats. The Sync system and stereo are high quality too and simple to use.

There also is a parallel parking feature on the Platinum model, but I didn’t use it, nor was it obvious how it could be employed.

Note that Ford offers five trim levels – base, XLT, Limited, Sport and Platinum. Both the Sport and Platinum offer the new twin-turbo EcoBoost V6, while the base model starts with a 290-horse 3.5-liter V6 and a 2.3-liter EcoBoost I4 is optional in base, XLT and Limited. It generates 270 horses, but somewhat better fuel economy. 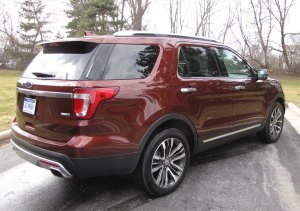 Gas mileage was nothing to get excited about in the twin-turbo. I managed 20.9 mpg in about 60% highway driving. The EPA rates this at 16 mpg city and 22 mpg highway.

Certainly there are many trim, price and engine choices here, but no matter the model the Explorer is a quiet, comfortable mid-size SUV that will hold a family that’s large in number, and dimensions.

Made in: Chicago, Ill.