While the early Corvettes were cute little underpowered sports cars, for my money they got serious and more aggressive looking for 1958 when Harley Earl and his design crew gave them quad headlights.

To be honest, the Corvette had gotten off to a rather slow sales start but 1958 was its landmark year when sales hit 9,168 and it was on its way to Chevrolet and industry icon.

Now Autoart delivers a sweet silver blue 1958 Corvette in 1/18 scale, and this one comes with a matching silver blue metal roof that fits on to allow it to be displayed top up, or down. 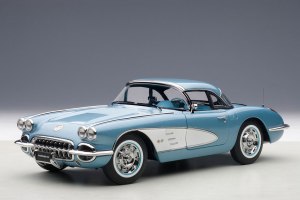 Outwardly the big deal change for 1958 was Corvette’s quad headlights along with a chrome strip the length of the front fenders. There also were non-functional louvers on the hood and the car grew by nine inches in length and about two inches in width. Radius rods were added to help the rear suspension and chrome trunk spears that some called suspenders were added to the trunk. The hood louvers and rear suspenders didn’t make it to the 1959 model.

But this was still the same basic C1 Corvette that was built through 1962 and listed at $3,591. The Hagerty insurance folks say an average selling price for a 1958 Corvette today is $47,500.

Engines included a 270-horse 4.6-liter small-block V8 with four-barreled twin carburetors and a 290-horse version of that 283 cu.in. V8, but with fuel injection, a first for Corvette. Bumpers also were attached to the car’s frame, not body, to provide more protection.

Chevy also redesigned the interior, creating a much more attractive and useful gauge cluster directly in front of the driver. While on the passenger’s side, a grab bar that some called a sissy bar, was added. Seat belts were standard from the factory too.

The sample car featured a beautiful silver blue paint job along with the white scalloped side trim that included the Vette twin-flag logo and three chrome accent strips. Seems fitting this finish is so nice because on the original 1958s, Chevy went to an acrylic-lacquer paint and away from the old enamel used on earlier models.

The chrome bumpers and 9-vertical-bar grille, down from 13 bars in earlier Vettes and well executed and the quad headlights look realistic and include chrome bezels. There’s also a big Corvette medallion centered on the car’s nose. The wraparound windshield includes chrome trim and the wipers have chrome arms. That chrome from the windshield blends into the trim atop the door and surrounding the two seats.

The chrome doesn’t stop there, and it shouldn’t. The Vette has chrome tonneau releases behind the seats and chrome door handles and key holes. I really love the way that chrome bumper wraps around the car’s curved rear-end and looks like jet openings that would help the car blast off. The 1950s cars were loaded with rocket/jet styling cues. 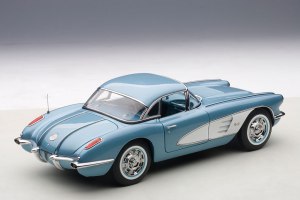 Autoart also delivers whitewall tires and big chrome hubcaps with spinners on the hubs, plus the front wheels are poseable, but do not turn with the steering wheel. This model comes too with a blue metal roof and detachable antenna for the driver’s side rear fender.

With the roof off you easily see the snazzy matte light silver blue interior with ribbed seats and white cue ball shifter. There’s a 3-spoke wheel with chrome sport spokes and chrome trim on the doors and behind the sissy bar on the passenger’s side. The 1958’s dash is better looking than the original Vette dash, featuring four round gauges below the sweeping speedometer hood and the tach is centered on the steering column right in front of the driver. No seatbelts are visible, despite this being the first year they were factory installed.

Overall a beautiful 1/18 Corvette at what has become the medium price range for fine die-cast cars.