GM’s concept cars of the 1950s were showcased in traveling shows called Motorama and actually looked futuristic and in some cases included features that would show up on future cars, sometimes way into the future.

One was the bright red over white Buick Centurion XP-301 that was displayed in 1956 Motorama shows. NEO now offers a stellar example of the show car in 1:43 scale, and the resin model may surprise you.

The Centurion, a name later used in the 1970s by Buick, was a Harley Earl design reflecting the aircraft and rocket styling touches that were so popular in the 1950s as the U.S. was rushing toward the space race.

Its pincher like nose design with headlights in rocketlike pods would grab everyone’s attention at the time, along with the tapered tail that looks like a jet engine with overhanging flat fins. Oh, and then there’s the bubble top, completely clear except for the metal support structure and window frames. END_OF_DOCUMENT_TOKEN_TO_BE_REPLACED

If you do something well, it often behooves you to repeat what you did. NEO knows that and creates a new 1949 Cadillac Series 62 Club Coupe, this time in 1:24 scale. 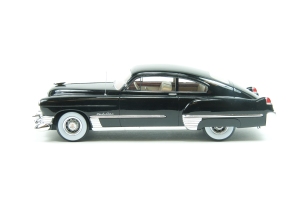 As with its previous 1:18 scale version, this Club Coupe is a car with presence, class and substance, just a tad smaller. The real one also was a sales standout for Cadillac as the brand fought to re-establish itself after World War II.

This black resin beauty continues the detail NEO brought to its earlier model, but in the smaller scale so popular with plastic car model builders. Both Cadillacs are distributed by American-Excellence, which supplied our review model.

In case you missed our Scale Auto DC review of that model, here’s a refresher.

Cadillac launched the Series 62 in 1940 as an entry-level Caddy, but production ended in 1942 as auto factories turned their efforts to war machines. The third generation Series 62 designed by GM’s noted Harley Earl went into production as a 1949 model, riding on a 126-inch wheelbase, measuring 214 inches long and touting GM’s new overhead-valve V8. END_OF_DOCUMENT_TOKEN_TO_BE_REPLACED

While the early Corvettes were cute little underpowered sports cars, for my money they got serious and more aggressive looking for 1958 when Harley Earl and his design crew gave them quad headlights.

To be honest, the Corvette had gotten off to a rather slow sales start but 1958 was its landmark year when sales hit 9,168 and it was on its way to Chevrolet and industry icon.

Now Autoart delivers a sweet silver blue 1958 Corvette in 1/18 scale, and this one comes with a matching silver blue metal roof that fits on to allow it to be displayed top up, or down.

Outwardly the big deal change for 1958 was Corvette’s quad headlights along with a chrome strip the length of the front fenders. There also were non-functional louvers on the hood and the car grew by nine inches in length and about two inches in width. Radius rods were added to help the rear suspension and chrome trunk spears that some called suspenders were added to the trunk. The hood louvers and rear suspenders didn’t make it to the 1959 model. END_OF_DOCUMENT_TOKEN_TO_BE_REPLACED

I’m a sucker for fastback coupes. That usually means cars like a mid-1960s Mustang or Barracuda. Yet here’s a new old one to consider, the 1949 Cadillac Series 62 Club Coupe.

This is a car with presence, class and substance. Incredibly, it also was fast and a sales standout for Cadillac as the brand fought to re-establish itself after World War II.

NEO has created a beauty in 1:18 scale resin that American Excellence supplied for our review. 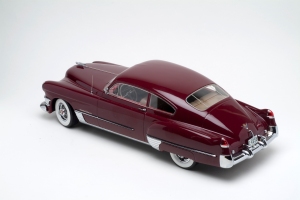 The Series 62 was launched in 1940 as an entry-level Caddy, but wrapped up production in 1942 as auto factories turned their efforts to war machines. The third generation Series 62 designed by GM’s noted Harley Earl went into production as a 1949 model, riding on a 126-inch wheelbase, measuring 214 inches long and touting GM’s new overhead-valve V8.

The engine was a big deal, replacing a lower powered and heavier L-head model. The new 5.4-liter, 331 cu.in. V8 delivered 10 more horses at 160 and this model weighing 200 lbs. less than the 1948. So impressed was Motor Trend, then in its infancy, that the Series 62 became the magazine’s first Car of the Year. END_OF_DOCUMENT_TOKEN_TO_BE_REPLACED