Lamborghini’s super SUV is an eyeful, even in 1:18 scale … 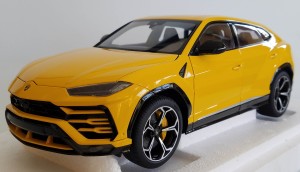 Naturally few of us will ever be able to afford a Lamborghini, but I know where you can get one for less than $300 … from Autoart and it’s in 1:18 scale.

Like the rest of the automotive market, the raging bull of Italian auto design and supercar power has adapted to the market. It now makes an SUV, the Urus.

Sounds like a planet to me, but a little research tells me it’s a big ol’ long-horned European wild ox that recently became extinct. Scientists say it was an ancestor of domestic cattle, so plays into the wild bull imagery of Lamborghini.

Like Lamborghini, Autoart now expands its supercar lineup with the Super SUV Urus. The test sample was a bright solid yellow, or giallow auge in the vernacular. If you’re not shopping the supercar or super SUV market regularly the Urus may be somewhat new to you. Here’s the scoop.

Urus was launched in 2019 as a super sport-ute with a raging 641-horsepower twin-turbo and intercooled V8, plus styling that Lambo hoped would set it apart from the Land Rovers and Porsche Macans on European highways and byways. It’s not as visually stunning or memorable as its sexy supercar cousins, the Aventador or Huracan, but it IS big and muscular looking. And like its sleek relatives Urus packs a muscle-bound price tag. Urus lists at $203,995 for starters on a 2021 model.

So like its slippery supercar siblings, Urus is quick and racy. No surprise there. Yet it’s quick to stop too featuring vented and cross-drilled carbon-ceramic disc brakes front and rear and giant performance-rated Pirelli 22-inch tires. Those are properly labeled on the model, although in black so a little tough to see unless held up to the proper light.

For the record Urus shares a variety of underbody parts with Audi’s fine Q8, which while pricey isn’t THIS pricey. Still, it does feature a Lamborghini logo, and it’s the least expensive Lambo too, so maybe you WILL buy one someday. Need another reason to mortgage the cattle ranch for the real deal? It’ll carry five adults, three more than any Lamborghini supercar!

OK, let’s look at the model. 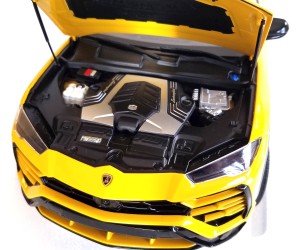 Gorgeous exterior and paint job, as usual for Autoart, plus a snug fitting hood that’s a bit difficult to snag an edge to lift. Once open the black struts hold it upright easily and reveal the silver and black cover for its massive V8. There’s Lamborghini labeling on the cover and an oil dipstick cap that’s properly labeled. You can see some of the silver engine block and requisite plumbing, plus a black radiator hose sneaking out from beneath the cover. And there’s a host of electronics boxes visible here, plus a blue washer fluid filler cap up near the wipers on the driver’s side.

But if you’re like most of us you’ll pose this in your display case with the hood down to better accentuate the SUVs pumped up physique. Unique to it is the little V-shape cut into the hood where it rests near the Lambo’s nose logo just above the gloss black grille. Then there are the yellow strakes beside that grille and a lower yellow and black nose opening down where one might imagine a chin spoiler. Behind all that are one massive and two smaller radiators that look to be exquisitely detailed photo-etch metal. 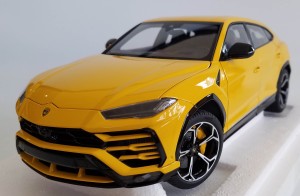 There’s a small triangular black accent descending from just below the A-pillar and gloss black trim atop all the wheel wells. The side mirrors also are gloss black as is the window trim, B-pillars and rocker panels, with just a touch of silver trim above those panels.

While the sealed headlights are fine, the taillights are a more interesting shape and with the thin red lenses offer a unique look, plus Lamborghini is spelled out in silver on the gloss black trim that links the taillights. Two sets of twin large-mouth exhausts exit the rear in a silver-clad lower tail that also includes black screen work below the opening hatch. Inside there’s a cargo cover and flocked carpeted cargo floor, while outside there’s a thin wing that partially covers the hatch window, which includes a defroster grid. A shark fin antenna graces the roof’s rear too. 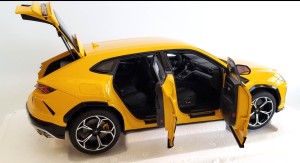 I really hoped this interior would feature some of the wild-child color from the Urus’s exterior and that some of the SUVs feature in the 1:1 world. But no, it’s black. Darn. How cool would this be with bright yellow seat trim at least?

Still, all four doors open to give you a good look inside and the trim level is top-flight. Lamborghini-labeled kick plates are at each door. The charcoal black seats are exquisitely shaped and show silver power seat controls on the sides and each seat, front and rear, has a yellow Lamborghini logo on its headrest.

I appreciate the fine dash and door detail too. Each door features matte silver trim, door handles and mesh stereo speaker screens. Likewise that trim extends across the dash, down the console stack’s sides with similar trim on the lower portion of the steering wheel hub. Gas and brake pedals, plus the dead pedal are trimmed in silver too.

The dash includes well shaped air vents and gauges with reflective surfaces on the instrument cluster and center stack mega-screen. Now if only the turn signals worked – kidding! The steering does though, turn the wheel and the front wheels respond, so you can pose this with wheels askew to feign a high-speed turn.

This Lambo’s wheels and tires are excellent too, as mentioned before the tires are labeled and beautifully treaded. But the 5-spoke, twin T-spoked wheels are particularly sharp and the yellow calipers behind them reflect the SUV’s body color and carry Lamborghini labeling. Meanwhile, the discs themselves are stellar too with the cross-drilled dimples visible in each.

Not much more one could wish for in a Lamborghini Urus model, unless it was the keys to a full-sized version.