Small SUVs and crossovers are nearly as thick these days as political pundits, so it takes some effort to separate one from the mob of little tall wagons.

Lexus tries, with some success, with its NX 300, based on the previous generation Toyota RAV4 platform. As in much earlier times, Toyota tries with styling. The big deal here is its giant spindle grille and fancy 3-dimensional taillights outside, and its multicolored interior, even though the colors are black and white, and some folks will argue that black is the lack of color.

Anyway, the NX looks more edgy and distinctive than say an Acura RDX, Chevy Equinox or GMC Terrain. That can be good, or not.

What the tested F Sport had going for it was its sporty handling and a few accouterments, such as sporty bucket seats, aluminum pedals, heated steering wheel with paddle shifters, and much sportier handling than a standard model, including 18-inch tires and wheels. On the down side, the sport suspension creates a very stiff ride that can seem a bit much on potholed city streets. The ute’s short 104.7-inch wheelbase also doesn’t help ride quality either.

Five drive modes, including one for Snow, are available. But the Sport and Sport+ modes firm up steering and create a more aggressive shift pattern that peps up NX, making it more than just another small ute/crossover. You never have to wonder if the turbocharged 2.0-liter I4 will help you scoot ahead of other traffic when needed. It delivers 235 horsepower with an impressive 258 lb.-ft. of torque and is well mated to a 6-speed automatic.

Sure, there are other small utes with more power, but the NX 300 F Sport is quick and nimble. Handling is easy and precise and in the Sport or Sport+ modes feels much more like a luxury sport sedan. Normal mode is fine for most driving though, and still relatively responsive.

While looks and performance set NX off from the crowd, its stylish interior may be what galvanizes a potential buyer’s opinion most quickly.

The Cadmium Orange (metallic orange, and a $595 upcharge) test vehicle was an eyeful, but its black and white leather interior got the most attention from riders. Seats were white with black accent stripes and there was white facing on the doors’ armrests. One friend called it a zebra interior, again, which may be positive or less than complimentary. 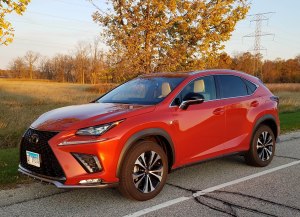 There also is textured metal-look trim on the doors, satin chrome trim on the air vents and console and the dash features contrasting stitching so it’s not simply a sea of black leather.

To drive home the luxury of the Lexus is a driver’s seat that powers back once the ignition is turned off and a power tilt/telescope steering wheel, which helps set up a driver for a comfortable ride. There are three driver’s seat memory settings too, part of a $2,865 option package that adds heated and cooled front seats and more. 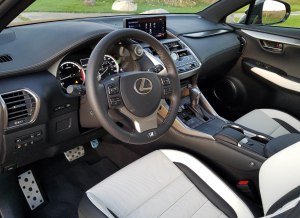 Lexus seats are quite supportive too, being sport buckets up front with a tight butt pocket. Rear seats are equally narrow in the hips and headroom is in short supply due to the roof’s angle. We crammed five adults in for a work lunch outing, but everyone agreed the back seat only comfortably seats two, making the NX a four-passenger vehicle.

The steering wheel also is heated here, but being an F Sport deserves to be a sporty D-shaped, or flat-bottom steering wheel. There are the usual control buttons on its hub.

I like the dash layout, which puts everything where it’s easy to see and understand. Luckily Lexus has bent to consumer pressure and added radio tuning and volume knobs, but a Remote Touch system on the console is the main way of adjusting the large infotainment screen. It’s clumsy at best and remains a distraction, not a help, when driving.

Luckily a $2,920 option package upgraded the 8-inch screen to a 10.3-incher and also added a marvelous Mark Levinson 14-speaker premium surround sound system with 835 watts of power. If you are into music, this is a must-have as it fills the vehicle with clear sound.

That earlier $2,865 package also added a power moonroof, and blind-spot monitor with cross-traffic alert, both pluses. A panoramic view back-up monitor is at $800 extra, but aids in parking lots in particular, and with the NX’s large rear pillar somewhat obstructing your view, is a smart addition.

Also added is intuitive park assist with automatic braking for $535. I could pass on that as parking a car isn’t that difficult, normally. 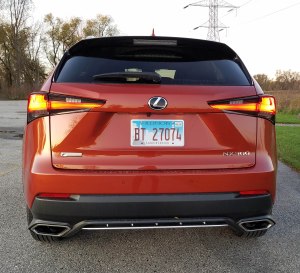 The most surprising addition was a power hatch for $400. I would expect that to be standard on a ute/crossover starting at $41,405, including delivery. That’s certainly near luxury level pricing and Lexus is a luxury brand. With all the doodads added here the tested NX 300 was well into luxury pricing at $51,910. Remember, this is a small ute/crossover, not a mid-size.

A few more points to ponder. There’s good cargo room behind the rear seat at 17.7 cubic feet, and if you fold down the rear seat you’ll have 54.6 cu.ft. There’s also considerable storage room under the cargo floor. Towing also is possible, as the NX is rated to pull 2,000 lbs.

On the gas mileage front the NX is average, but again you are opting for more than 200 horsepower. NX prefers premium gas and is rated at 22 mpg city and 27 highway. I managed just 22.5 mpg in a week of about 70% city driving. 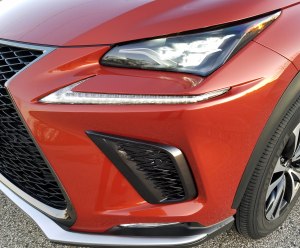 The NX F Sport is a fun drive and a distinctive one too, especially in bright metallic orange. Pricing once all the options are added is way into luxury territory for a small ute. So remember to price like-equipped vehicles if you’re in the market.

Made in: Tahara, Aichi, Japan

Panoramic view back up monitor, $800