My uncle Clarence Winston (Wink for short) Savage had a beautiful dark metallic blue 1964 Plymouth Belvedere that I just loved as a kid. He could make that car’s tires bark several times between his house and ours, a half block away. He was a hot foot, one of the things I liked about him.

The Fury was Plymouth’s B-body coupe and sedan, while Dodge went with a more mundane name, the 330. So, when I spied NEO’s new 1964 Dodge 330 I was happy to review it for Scale Auto DC, just to see how it measured up to my memories of the oh-so-similar Plymouth Belvedere, which was a 4-door.

NEO’s Dodge is another in its fine, and affordable 1/43 scale series and while not the deep blue I would prefer, is a light metallic blue, not unlike some blues on today’s cars. But there was no deep layered paint like today, and no clearcoat.

I remember the Plymouth being a big brute, filling Wink’s garage from end to end. Indeed, the Dodge 330 was a full-size car riding on a 119-inch wheelbase and stretching a full 208.1 inches from thick front chrome bumper to rear chrome bumper. This body style lasted just three model years, from 1962 to 1964, then grew even larger and became the Polara as the 330 and 440 model names were phased out.

The rear-drive 330 came as either a two- or four-door sedan, although most folks would refer to the 2-door as a coupe, since it had just two doors. Standard power came from a Slant-Six engine boasting 145 horses, but there were six engine choices in all, including V8s up to the powerful Wedge 426 with dual four-barrel carbs, and creating 415 ponies. Top speed was estimated at 100 mph with a 0-60 mph time of about 12 seconds. Talk about muscle!

Standard features on the 330 included a lighter (remember those?), front seat foam cushions and rear seat arm rests. And I know we all called these things lead sleds at the time, but the Dodge barely eclipsed 3,000 lbs. Today’s cars average closer to 3,500 lbs. and crossovers and SUVs even more. An Audi Q8 I test drove recently weighed 5,004 lbs.

To me the Plymouth had a better-looking nose with quad headlights instead of the giant round bugeyes featured in this Dodge. Those debuted in 1962 Dodge models, and certainly gave them a distinctive look, much like the famed Chrysler Turbine car of the time. 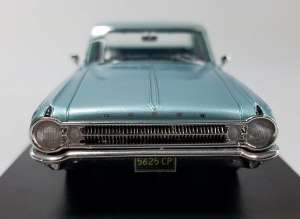 The basic lines are well executed here, including the raised ridge from just behind that single headlight back to the rear quarter panel. And the big chrome grille and chrome bezels around those giant jet-like headlights looks fine. Headlight lenses look realistic too and there are smaller running lights adjacent to the grille.

There are wide chrome front and rear bumpers too, and each houses a 1964 Michigan license plate dead center.

Chrome photo-etch Dodge lettering graces hood and trunk lids, and there are thin chrome wipers and side mirrors on each door. Plus, the model includes PE window trim, which looks a tad thick on the side windows, including a vent window. Door handles also are chrome as are the tiny hubcaps on the car’s light silvery blue wheels. Tires are treaded black-walls, but not branded. 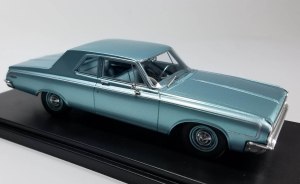 There are twin exhausts in back and four red square taillights.

Inside the car’s interior is a similar gray-blue shade with bench seats front and rear. The car properly has those rear armrests, plus chrome knobs for the roll-up windows and door releases. The steering wheel is a two-spoke with horn rings. The dash appears to have a wide decal to imitate the gauges and glove box.

It all looks fine, but for my money, I’d like to see it in a dark Navy blue with some white-wall tires on it. Or better yet, how about a 1964 Plymouth Belvedere model too!