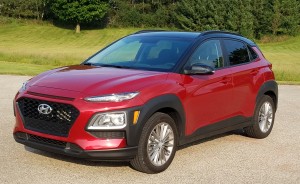 Kona’s cute, it’s inexpensive, it drives great, and like all vehicles that folks want to buy these days, it’s a crossover.

Frankly, it had me at cute, but the rest is like frosting on a gluten-free homemade cupcake.

I don’t want to dwell on price for fear it’ll frighten serious car buyers off, being too inexpensive. But get this, the base SE starts at $20,480 with destination charge. Wow! My Pulse Red (dark metallic red) SEL was just the next trim level up and starts at $22,280 and all-wheel-drive is an available option on all models.

For that you start with a cute crossover with a decent 147-horse 2.0-liter Atkinson cycle I4 under the hood. Atkinson cycle, for the uninitiated, is one that burns cleaner and more efficiently to deliver better power and fuel economy, a stereotypical win-win.

Handling is sweet with just enough weight to the wheel to deliver a high-quality feel and good road handling too. The crossover corners well and feels sporty, if not racy. The engine is powerful enough to make the vehicle fun in city driving and able to reach highway speeds without any extra effort. Plus there’s a Sport drive mode button to increase low-end power. I only used it for quick getaways at stoplights on occasion. The six-speed automatic tranny hooks it up well with the front drive wheels.

Need more power (I’m sure it would be even more fun)? Well, move up to the Limited or Ultimate trim levels. Both come standard with a 1.6-liter I4 turbo that bumps power up to 175 horses and torque from 132 in the SE and SEL to a massive (for this size vehicle) 195 ft.-lbs. Hope I get to test one of those soon, plus one with AWD!

Ride is well controlled for a car weighing less than 3,000 lbs. and riding on a 102.4-inch wheelbase. But it’s still a small car ride, meaning a little jittery on bumpy roads. Yet it never felt harsh and was as good, or better, than the Toyota Corolla Hatchback I’d driven recently.

Again, if you need more there’s a technology package that adds a forward collision warning system along with lane-keep assist and warning. It also includes a power driver’s seat, sun roof, and fog lights and costs about $1,300.

Braking is solid too with four-wheel discs, stability and traction control.

And then there’s gas mileage, rated at 27 mpg city and 33 highway. That’s nothing special compared to competitors like the Subaru Crosstrek, Mazda CX-3, Toyota C-HR or Honda HR-V, but it’s good and I managed 33.1 mpg in about an even mix of city to highway driving. I gotta say though, I really enjoyed driving this on the freeway as it was so easy to keep in its lane and zip around slower moving SUVs.

If Kona were just fun to drive, low cost and cute it would be a winner. But as the TV commercials say, “But Wait, There’s More!”

Inside it’s as comfortable as many entry-level sport sedans, yet with a dash so simple it was an absolute joy to use. No confusing buttons or dials that take your attention from the road.

Kona’s interior also was quiet, just a little road noise on the freeway, but way less than in the recent Corolla hatch.

The dash is neat and tidy with a 7-inch screen that melds nicely into the dash’s center stack, so not as clunky looking as in other small vehicles and some pricey German makes.

Hyundai’s touchscreen is easy to adjust and use while driving and there are volume and tuning knobs on either side to make it simple to find a new station. Climate controls are three simple knobs below the center stack’s air vents. No, there isn’t automatic or dual climate controls here, but adjusting the temp and fan speed was quick.

As usual today, the cruise, radio, trip computer and phone buttons are on the steering wheel hub and Kona’s is a manual tilt/telescope model.

Seats were manual, but well-shaped, just as in a sport coupe or sedan with good back and hip support. Plus even in this lower trim Kona there’s three-level heated seats. Plenty of head and legroom up front too, and headroom is fine in back, However, if front seat folks are tall the legroom is not generous in the second seat. I’m short, so long-legged riders fit easily behind me.

If power seats are your thing, and you must have automatic climate controls, you’ll want to move up the Limited trim level.

Kona also offers plenty of gadget hookups including a 12-volt, USB and auxiliary link in the cubby below the dash’s center stack. Android Auto and Apple CarPlay also are standard.

There’s an inside fuel door release too, sun visors that slide, and the rear hatch includes a wiper. Plenty of storage space beneath the hatch too, 19.2 cu.ft. before you fold down the split rear seats. Then it grows to 45.8 cu.ft. Plus there’s some hidden storage beneath the rear floor. Some might argue that a bit of the cargo space could have been spared for a bit more knee room in the back seat, but for young couples or singles rarely using the rear seat Kona has a primo arrangement.

For the record if you go with an AWD model you’ll get an independent rear suspension that may help ride a bit compared with the torsion beam in the test car. Also, note that AWD is not available in a few of Kona’s competitors, primarily the Kia Soul and Toyota C-HR, both of which have equally cute exteriors as Kona.

Now let us return to price. As mentioned above, the test car started way cheap at $22,280 and just added carpeted floor mats for $125 to end up at $22,405. That’s bargain basement pricing and should tickle any recent college grad that’s just landed a first job.

But you can go slightly more upscale in the Limited at $25,680 and get that horsier engine and leather seats. Move to the Ultimate at $28,380 and you’ll get the previously mentioned tech package, a head-up display, 8-inch infotainment screen, automatic high beams, parking sensors, and a color multi-function info display. Note that smart cruise control is not available yet on Kona.

Rarely is an inexpensive vehicle with a personality this much fun to drive. Kona is a winner! 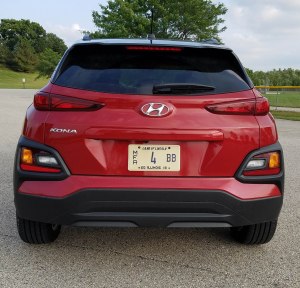