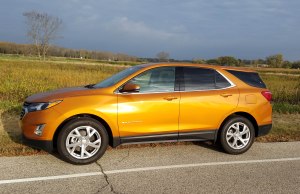 Chevrolet updated the Equinox for 2018 by doing something carmakers rarely do these days, shrinking it.

Equinox is nearly 5 inches shorter than its predecessor, but it feels lighter and livelier to drive, another rare accomplishment. Usually carmakers add inches and weight to increase their appeal to a wider expanse of the buying public.

So for compact sport-utility and crossover buyers looking for something less trucky and more nimble like a car, Equinox becomes a solid choice along with Mazda’s CX-5.

In its base trim, the L model, Equinox is both inexpensive and mildly powered. It starts in front-drive mode at $25,525 including delivery fee, and its I4 is a 1.5-liter turbo that creates 170 horsepower. In the Equinox L the tranny is a six-speed automatic and that combo leads to an EPA rating of 26 mpg city and 32 mpg highway. Laudable!

Ah, but the majority of buyers are likely to move up to the LT model, which is what I tested in its pumpkin spiced Orange Burst Metallic paint scheme. The OBM color gets your attention, and that of friends and co-workers, all for just $395 extra.

The LT is the first Equinox with Chevy’s new 2.0-liter I4 turbo that cranks 252 horsepower and is rated at 260 for torque. This creates a much speedier and more satisfying drive as the turbo spools up quickly to get the crossover up or down a highway entry ramp before a big 16-wheeler is breathing down your tailpipe.

The tested LT with just front-drive seemed light and lively on the weeklong drive. It cornered well and steering effort was light. Parking was simple.

Backing up with the standard, even on L, rearview camera was easy and there’s rear park assist and rear cross-traffic alert too. The latter two are part of a much-appreciated $1,945 convenience and confidence package that also includes a blind-spot warning system for safety. The convenience part stems from the package’s power rear hatch, remote start, dual climate controls, universal remote and heated front seats. This is a high-value package.

I really like Equinox’s 9-speed automatic too, a slick shifter that you barely notice as you zip up to speed or just trundle along in city stop-and-go driving. 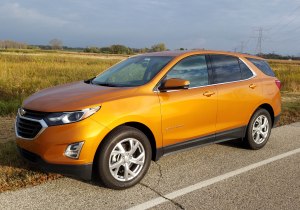 You may notice the sometimes abrupt ride though, a bit surprising in a crossover with a 107.3-inch wheelbase. Much of the time the Chevy’s ride was compliant and pleasant, but the sharp bumps so prevalent in Wisconsin roads could feel more pronounced than in some utes and crossovers I’ve driven. While this is not a sporty ride, a little more damping from the shocks would be appreciated by many passengers. Note too, the LT model has 18-inch tires, up from the standard 17-inchers.

Something any of us can appreciate, especially us Boomers, is the quiet interior Chevy creates in Equinox. Wind and road noise are well muted making the cockpit a place for easy conversations.

I also appreciate the more streamlined, less boxy design of the new Equinox. It looks and feels more modern than the previous model.

Inside, the test vehicle featured black dash, console and center stack along with gray cloth patterned seats with tan stitching. Satin chrome trims gauges, vents and the console. There is some reflection off that on sunny days. But it looks neat, tidy and up to date. Overhead is a gray headliner. 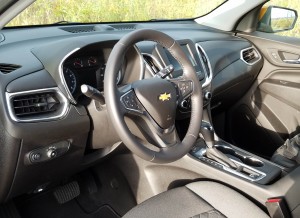 Chevy’s dash is well laid out and easy to see with controls that are obvious so the driver can quickly figure their function. The large radio screen is easy to navigate too, but there’s no navigation system standard here, which seemed odd.

Yet Apple and Android hookups are standard along with the usual 12-volt and USB port connections in the space beneath the center stack. There’s even a Wi-Fi hot spot in the vehicle. Overhead is the OnStar safety system, but no sunroof. Visors are good though, flipping to the side. 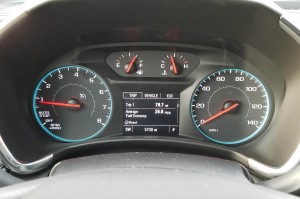 There was one control oddity in the tested Equinox too. Every time I pressed the button to turn off the irritating stop-start function, it turned off the entire climate control system. Likewise, if you want to recirculate air instead of drawing in fresh air from outside (I often turn off fresh air when behind a diesel for instance), the entire system turned off. Hope this was a problem only on the test vehicle. 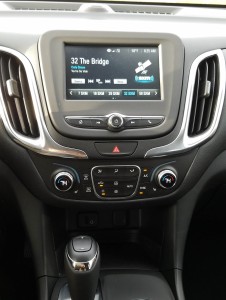 This is a two-row vehicle with seating sufficient for five adults. But one of my few complaints with Equinox is the tight hip-hugging fit of the front seats. Being cloth it’s a little tougher to slide into them to begin with, but getting out was even harder due to the seats’ tight hip pocket. Several riders commented on how small or tight the seats seemed. Seat backs are fine providing good lower back support and the LT model comes with power front seats and power lumbar adjustment for the driver. Rear seat riders had no complaints.

As mentioned earlier, the front seats are heated with three levels of heat easily controlled via buttons separate from the center screen. Chrysler loves to include those buttons on their nav/radio screens, but Chevy remains in the mainstream.

Rear seats fold down to increase cargo room, but there’s a good amount of space behind the second row seats, plus some additional storage beneath the cargo floor. The power hatch worked well, but instead of having the power button on the hatch door, it’s just inside the cargo area on the driver’s side.

Economy of operation is pretty solid with Equinox too.

The EPA rates this LT model at 22 mpg city and 29 mpg highway, with premium fuel preferred. You’ll see that premium preference among many turbocharged vehicles. I got a reasonable 26.4 mpg in a mix of city and highway driving.

Pricing is also economical as mentioned up top. The L is the entry level, followed by LS, LT and Premier models. All but the L are available in front- and all-wheel-drive. The LS is the lowest priced AWD model, starting at $28,205. The tested LT model lists at $29,145 with $895 delivery. With just two options the test crossover was $32,380, still well below the average car cost these days.

The Premier model, which adds leather seats and a number of the common options on the other lower level models, lists at $38,175 for the AWD model. The Premier also goes with larger 19-inch tires.

Chevy’s redesign of the Equinox is a fine effort that puts it into direct competition with the better players in the compact crossover market, especially among those with good power and above-average handling abilities.

Misses: Tight hip-hugging front seats, odd climate controls all turn off if the stop-start engine function is turned off. No navigation system and occasional abrupt ride.

Made in: Ingersoll, Ont. 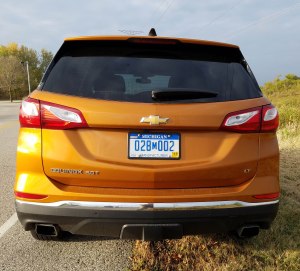