Often overlooked ’56 Chevy Bel Air gets its due …

Whose family didn’t own a 1950s Chevy when the entire country was seeing the U.S.A. from their Chevrolet?

Our family had a green 1955 Chevy 210, the mid-level model that ultimately became the Biscayne. That car ran forever and was still an attractive hardtop (ok, a little rust) when we traded it for a white Plymouth Valiant convertible in 1963. Now NEO creates a two-tone 1956 Bel Air, a sharp two-door hardtop.

This was the second generation Bel Air and was considered a premium Chevy model.  So popular was it that the Bel Air was built at six Chevy plants across North America. Some were even made in Australia, New Zealand and South Africa. Sales were stellar, keeping Chevrolet American’s No. 1 brand.

After launching a restyled model for 1955 that was an overwhelming success, Chevy mildly restyled the 1956 model to replace what was known as the Ferrari grille with a full-width one that was more conventional at the time. Likewise the wheel wells were tapered for a more graceful appearance and the taillights were altered to include jet-like protrusions so popular on all cars of the day. Chevy also hid the gas cap inside the left fin, as it had on some Cadillacs.

Wisely Chevy created a sharp two-tone version, as in the sample here, with the roof, rear deck and top of the rear quarter panels being painted in an accent color. Here it’s white to offset the dark red to near purple of the car’s nose and lower portions. The model’s color is closest to the original Dusk Plum offered in 1956.

The Bel Air, which included a gold script of the car’s name atop each rear quarter panel, was a well-equipped model, coming with goodies not found on lower line models. That included stainless steel window moldings, full chrome wheel covers (some call them hub caps, but these cover more), plus carpet inside and fancy chrome headliner bands on the hardtop models.

Engine choices were plentiful, with four options from the standard I6 creating 140 horses to the hot new Corvette V8 that made 225 horsepower. Not bad power for this era! 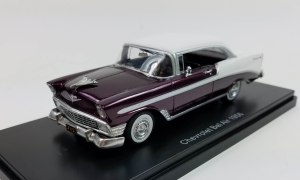 NEO makes its models in cast resin, and this is 1/43-scale beauty is a sparkling dark red to burgundy with white accents. A big Chevy jet-like ornament protrudes from the car’s hood and there are nice photo-etched wipers, vent window frames and a wide grille. Other window trim is silver paint as is the chrome accent behind the front wheel wells and along the car’s rocker panels.

Fenders appear to be painted too and the front and rear fenders on the sample were applied at a bit of an angle. It doesn’t spoil the model though, in fact, looking a lot like the fit and finish on the real deal where parts were not always perfectly aligned. My dad used to love to tell a story about how someone at the factory had put a ball bearing in our ’55 Chevy’s rocker panel and then sealed it up. That thing clunked every time you started or stopped the car until he snagged the bearing and removed it.

The car also has realistic looking headlights, mirrors on both sides and door handles with lock buttons below them. Taillights are painted and the Chevy features dual silver exhausts in back. This one has a black interior with moderate dash detail including the twin cockpit cowl standard at the time along with rigged seat cushions.

As with all NEO models the Bel Air comes in a nicely formed acrylic case and sits on a black plastic stand with the car’s name on the base.