Often overlooked ’56 Chevy Bel Air gets its due … 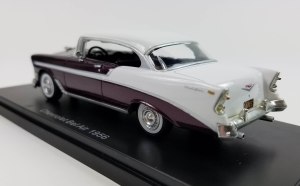 Whose family didn’t own a 1950s Chevy when the entire country was seeing the U.S.A. from their Chevrolet?

Our family had a green 1955 Chevy 210, the mid-level model that ultimately became the Biscayne. That car ran forever and was still an attractive hardtop (ok, a little rust) when we traded it for a white Plymouth Valiant convertible in 1963. Now NEO creates a two-tone 1956 Bel Air, a sharp two-door hardtop.

This was the second generation Bel Air and was considered a premium Chevy model.  So popular was it that the Bel Air was built at six Chevy plants across North America. Some were even made in Australia, New Zealand and South Africa. Sales were stellar, keeping Chevrolet American’s No. 1 brand.

After launching a restyled model for 1955 that was an overwhelming success, Chevy mildly restyled the 1956 model to replace what was known as the Ferrari grille with a full-width one that was more conventional at the time. Likewise the wheel wells were tapered for a more graceful appearance and the taillights were altered to include jet-like protrusions so popular on all cars of the day. Chevy also hid the gas cap inside the left fin, as it had on some Cadillacs. 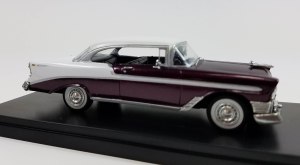 Wisely Chevy created a sharp two-tone version, as in the sample here, with the roof, rear deck and top of the rear quarter panels being painted in an accent color. Here it’s white to offset the dark red to near purple of the car’s nose and lower portions. The model’s color is closest to the original Dusk Plum offered in 1956. END_OF_DOCUMENT_TOKEN_TO_BE_REPLACED 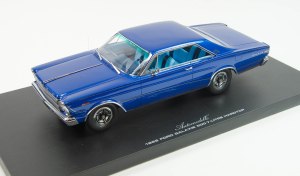 As a kid I saw a lot of Ford Galaxies around the neighborhood and some of my northern Indiana relatives who farmed had them and weren’t afraid to run them out in a cornfield if necessary.

But rarer was the Galaxie 500 7-Liter Hardtop, a luxury model that wasn’t afraid to lay a little rubber at a stoplight. That’s the cast resin model Automodello reproduces in popular 1/24 scale and paints up in a variety of historically accurate colors.

While the Galaxie 500 debuted in 1965 it was the 1966 model that boasted a new 7-liter V8. This was Ford’s already powerful 390 V8 but enlarged to 428 cu.in. to create a real torque monster. Unlike the earlier 390 model this one could accommodate all the luxury options Ford packed onto its Galaxie 500 models to push them from standard family cars to luxury models.

So in addition to performance type power, the 1966 models had power steering, power brakes, and air conditioning. The 7-liter also could be coupled with an automatic transmission, something the earlier Ford 427 V8 designed for NASCAR use, could not.

The new 7-liter model came only in hardtop and convertible models and sold well, about 11,000 units being made that year. By comparison, just 38 models were equipped with the horsier 427 V8 that year. END_OF_DOCUMENT_TOKEN_TO_BE_REPLACED

This is true too for diecast models, which is what makes Automodello’s new 1:24 Lincoln Continental Mark III a hit, even at its strong $299 asking price. This is a car for baby boomers who favor the classics over muscle cars. (I know that’s heresy.)

This is rare in that I’ve never seen a 1971 Lincoln Continental Mark III in cast resin and in 1:24 scale. On that front Automodello has created a stunningly accurate and beautiful body with crisp accent and trim lines that reflect the Continental’s long, lean elegance.

The Mark III was a Lee Iacocca idea that legend has it came from his desire to see a Thunderbird of the day equipped with a big Rolls Royce grille. That pretty well sums up the Mark III’s appearance.

But it was 300 lbs. heavier than the T-bird, yet packed 365 horsepower coming from a new 460 cu.in. V8. That engine was created to help Lincoln challenge Cadillac’s Eldorado, along with the likes of Oldsmobile’s Toronado and Buick’s Riviera. END_OF_DOCUMENT_TOKEN_TO_BE_REPLACED