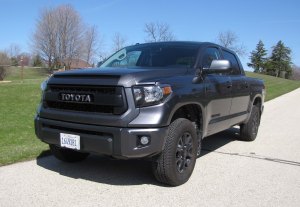 You’d think all big pickups are pretty much alike. First, their grilles are massive, their stance is tall and imposing, their engines are mostly V8s and they’ll all haul a honkin’ big load.

That’s true, but the devil is in the details and there are a lot of details because there are soooo many variations of every pickup.

Toyota’s Tundra TRD Pro Crewmax, this week’s test drive, is all of the above, but it falls short on some rather important details. 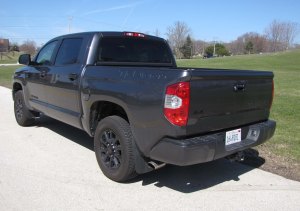 Second, Tundra doesn’t even offer a diesel engine, while the Ram and Titan both do. Incidentally, the diesels also get much better fuel economy. 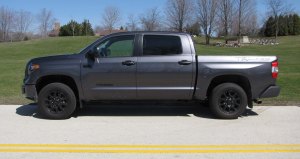 What Tundra has going for it is dependability and re-sale value. It scores well on both, and is, ultimately, a comfortable big pickup that will haul people and cargo well.

The TRD Pro is aimed at folks who go off-road a lot, the TRD standing for Toyota Racing Development. That means is has heavy-duty suspension parts that are designed to allow the driver to go bounding over fields and rocks at speed. The point is the shocks and suspension won’t bottom out. Think Baja racer!

This one had TRD-tuned Bilstein shocks with 3-stage compression damping. Tundra TRDs aren’t for sissies. Plus the test truck added TRD-tuned springs, a skidplate (to protect it off-road) and 2-inch lifts in front. Outwardly it has TRD stamped in the sheet metal along the truck’s bed walls, blacked out wheels and darkened markings. Think of it as stealth tough-guy markings.

Certainly there’s power here. The 5.7-liter I-Force V8 creates 381 horsepower and 401 ft.-lbs. of torque. It also is a Flex Fuel engine, so can operate on E85 fuel. This one grumbles and rumbles like a stock car engine and really feels peppy. Not that I did this a lot, but it’ll blast away from a stoplight like a muscle car. It’s hooked to a 6-speed automatic that shifts smoothly too. 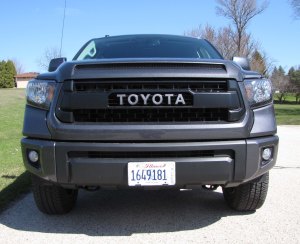 Handling is pure big pickup, a bit heavy, but easy to control. There’s not a lot of lane wander with the Tundra.

Ride though is bumpy. That TRD suspension that is meant to soak up rocks and ravines feels more bouncy in city driving with all the little cracks and crevices in our pavement. It’s not punishing, just feels like there’s a lot of bounce going on.

Braking, traction control and four-wheel drive are all fine. The 4WD is adjusted by a knob on the dash and includes high and low settings.

If you can make the leap into the truck, step-in height is 24 inches, you’ll find a fairly Spartan, but comfortable interior. Seats are black leather, to be sure. But the red stitching on those and portions of the doors and dash, are the only noggin’ nods to style.

There’s matte silver trim on the dash and steering wheel, plus a gray headliner. Tundra also three cupholders in the console up front a big glove box and giant center console storage box.

Gauges are easy to see and knobs and buttons easy to find and reach. Climate controls are three large dials and the radio has both a volume and tuning knob. The touchscreen buttons were large enough to see and easily press while driving too, and a rearview camera is standard.

Tundra still has key start and seats are fairly flat, but comfortable. This is a roomy interior too, with tons of rear seat legroom. Even tall passengers were surprised by how easily they could stretch out in back.

The manual tilt/telescope steering wheel has radio, cruise and trip computer controls on the hub and the air vents in Tundra are large, round and easily closed off, if need be.

Oddly there were no heated or cooled seats in the test truck that topped $46 grand. I’d expect those at this price. I’d also expect running boards.

The Crewmax has a short bed too (66.7 inches), not as useful for the working guy or gal who needs to haul lumber or building materials, as a standard bed (78.7 inches). However, there is an easy lowering tailgate that won’t slam down when it’s unlatched. Yet the test truck did not have a bed liner and I could see the bed’s paint was partially scratched by loads that already had been carried in the test truck. 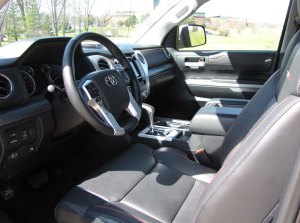 Not surprisingly, the A-pillars are massive, as in all pickups. Coupled with large side mirrors that somewhat hinders side visibility when driving.

There’s no doubt you can add more goodies, for instance a running board only costs $345, and push this well over $50 grand. Such pricing is not unusual for a pickup these days.

A couple other notes on the Tundra. The SR5 and 1794 models got new grilles this model year. Additionally, the rear bumper is made of three pieces so it’s less costly to repair than most pickups that would require a full bumper to be replace if damaged. And we all know pickups sometimes live a little tougher life than a crossover, small ute or sedan. 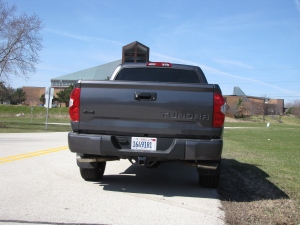 Made in: San Antonio, Texas