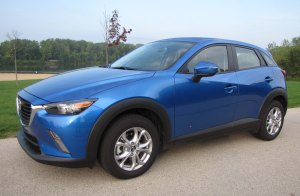 Mazda isn’t the first car maker with a small personal-sized SUV, but it certainly has one of the most stylish and fun to drive with its new CX-3.

The CX-3 continues the tone set by Mazda’s slightly larger CX-5 that competes with the likes of Toyota’s RAV4, Subaru’s Forester and Ford’s Escape. But the CX-3, with its slight 101.2-inch wheelbase and 148-horse 2.0-liter I4 engine takes aim at the Chevy Trax and Honda’s new HR-V, among others. These are entry-level sport-utes with all-wheel-drive, minimal interior room and generally not loaded with the multitude of electronic whiz-bangs that push most vehicles to prices well beyond $30 grand.

CX-3 is targeted at entry-level buyers, the young couples or singles that want to sit a little higher like they’re in an SUV and also have the advantage of AWD, but don’t have big bank accounts. But Mazda’s little ute goes a step, or two, further. It offers style, such as a longer, more shapely nose, which gives this a more appealing look than the econobox on steroids that most such little utes offer. The interior also is stylish.

Mazda’s zippy performance mantra continues here too. While the CX-3’s engine is small with modest horsepower, its technology is Mazda’s patented Skyactiv system that runs efficiently and delivers good power. The vehicle is lightweight too, coming in at less than 3,000 lbs. so it feels nimble. Handling is quick and fun.

Skyactiv’s other benefit is stellar gas mileage for an AWD ute, even small ones. The EPA rates this at 27 mpg city and 32 highway. I managed 30.5 mpg in about a 50/50 mix of city and highway, but I wasn’t shy about using the Mazda’s “sport” mode. That’s a toggle on the console that allows you to increase torque by changing the gearing patterns of the 6-speed Skyactiv Sport automatic with the flip of said toggle. 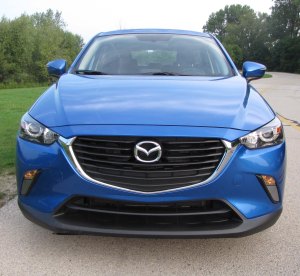 Bogged down in city traffic or getting on the highway and needing a burst of speed? Flip the toggle for 5 seconds (or more), get up to where you want to cruise, and then toggle back to a normal setting to save fuel. To be fair, I must tell you that acceleration is just so-so if you don’t toggle to the sport setting. Most other little utes, and even some mid-size ones, now use turbocharged four-cylinder engines to save fuel, but provide the torque many U.S. drivers appreciate. The Mazda sticks with its own Skyactiv technology though and with the sport mode you don’t miss having a turbo.

Ride is where some folks may have concerns with Mazda’s penchant for sportiness. The CX-3 can get fairly bumpy on city streets, passing along some choppiness to passengers. The Mazda uses a torsion beam rear suspension, which may help explain that ride. Chevy’s Trax provides about the best ride of any of these tiny utes, if ride comfort is paramount to you.

Braking is fine with four-wheel discs, along with stability and traction control being standard. Plus the CX-3 has full-time AWD and hill launch assist, a feature that helps keep the ute from rolling backward on a sharp incline as you move your foot from the brake to the accelerator.

The tested Touring model was a bright metallic blue, but inside it featured black leatherette seats with red stitching and dark red leatherette trim on the door armrests and console’s sides. There also was a red trim ring around the air vents and matte silver trim on the doors and bottom of the steering wheel hub while there’s carbon fiber look trim atop the steering wheel hub.

I was surprised by the interior’s attractiveness and the features, considering this model starts at $23,210. For that price you get a blind-spot warning system, push-button start, 3-level heated front seats and a rearview camera. Usually those items are part of an option package, or two, that add $2,000-$3,000 to the price tag.

This one did add a $1,410 premium package that includes a big sunroof, cargo cover, satellite radio and Bose 7-speaker audio system with HD radio. The test ute also added mobile start for $550 (a nice feature in winter) and a $100 rear bumper guard.

Total here was $26,150, including the $880 delivery charge. But that price is in line with some less feature-laden small utes, so compare what you get for the final price.

I found the interior comfortable and relatively quiet unless the sport mode was being used. That builds engine revs, but it was never annoying and the acceleration quick enough that the increased noise level was brief. Officially this will seat five, but four are more likely to be comfortable. Legroom is fine in back if front seat folks are not over six feet.

Seats were well contoured, in fact overly so in an attempt to be sporty. That makes the butt pocket a bit snug, so if you have a lot of junk in your trunk consider yourself forewarned. Riders found the rear seats comfortable and well-padded and I like the pump handle on the driver’s seat to allow it to be raised to make shorter drivers more comfortable. 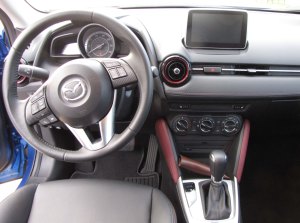 The dash was simple and easy to see and understand. The steering wheel is a manual tilt/telescope model with some radio and cruise buttons on the hub. Air movement in the vehicle was a little less robust than I’d like from the three round air vents on the dash. Oddly there was also a rectangular air vent, which seems to go against the rest of the dash’s styling. Not sure how to explain that.

Mazda’s navigation/radio screen is big enough to be easily viewed, but is controlled by a dial on the console, still not my favorite tuning method.

In back is a hatch with wiper and a little bit of storage under the floor. Rear seatbacks split and fold down to increase cargo hauling capacity.

While the Touring model is a good value for folks looking for inexpensive, yet stylish wheels and AWD, you could save more money by going with a base CX-3. That starts at $20,840 with front-wheel drive and edges up to $22,090 with AWD, both prices include delivery. Going top shelf with the Grand Touring with AWD brings the list price to $27,120, including delivery.

In the end, Mazda’s new CX-3 is about high value, good looks and more driving fun than most cute utes.