Sometimes in life we are lucky, and I was all of that as I slipped behind the wheel of Jaguar’s gleaming limo of a sedan, the XJL.

This is a beautiful car aimed at the beautiful people that have the money to spend on luxury and looks.

It’s a long car, hence the L in its name. Yet the XJL looks lean and muscular, like an Olympic sprinter ready to pounce on the competition at the start of a race. This is a spirited road car riding on a 124.3-inch wheelbase. Such length puts it in the league of full-sized SUVs, inside and out. UW’s starting five basketball players could ride comfortably in the XJL. And this was my second ride in such a luxury liner in the past year. Lucky me!

Overall the car is 206.8 inches long. By comparison, the sizeable Lexus LS460 AWD I drove just a few weeks back is 6.8 inches shorter in length, and it was plenty big. 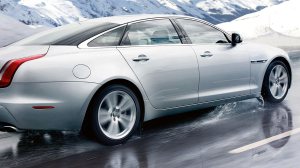 Yet unlike the Lexus with its smooth gentle giant of a 5.0-liter V8, Jaguar tucks a 3.0-liter V6 under its long hood. Ah, but the secret is that Jaguar supercharges its V6 to create 340 horses, 20 shy of the Lexus. But here’s the deal. Jaguar always has an eye on performance and keeps the XJL trim at 4,153 lbs., or about 500 lbs. lighter than the Lexus.

So when you slip the Jag into performance mode with a press of a checkered flag labeled button on the console, it rips up to highway speeds like it’s racing into the first corner at LeMans. While the Jag feels substantial, its nimble compared with the Lexus, or most other large luxury sedans.

The Jag also outperforms the Lexus slightly in fuel consumption, and both prefer 91 octane petrol. The XJL is rated at 16 mpg city and 24 highway, or 1 mpg better highway than the Lexus. I took the Jaguar to Chicago and back for the Auto Show, and to Madison and back, topping out at 23.9 mpg in the Chicago trip and averaging 22 mpg for the week. That included several days in the zero to sub-zero range during one of our winter vortexes. 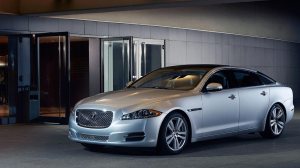 This model has AWD too, keeping it stable in snow and slush. We had some of that during my drive and traction was never a problem. There’s also a Snow setting on the round console-mounted gearshift to help the sedan avoid wheel spin. It works. Braking from four giant discs also is superb.

Acceleration is smooth and strong with the Jag’s 8-speed automatic transmission delivering near seamless shifts. Unlike my past Jag drive, the gas-saving “intelligent stop-start” feature was not abrupt. In fact, it was smooth and tame and seemed to kick in, or out as the case may be, less often than on the earlier XJL I’d driven. The cold weather may have played a role in that.

Steering effort is moderate, but offers good feedback and the car corners well, like a midsize sports sedan.

This is a satisfying blend of sport and luxury that carries over to the ride, which is well controlled without being stiff, firm without being punishing as in some European makes.

Nothing is punishing here, despite the car’s sporty nature and its price. The XJL’s interior is as quiet as any I’ve ridden in and on a level equal to the stone quiet Lexus. Last time I drove the XJL a friend tested its quietness with a smart phone app. At rest the interior rated 64 decibels and only bumped up to 67 when his daughter played her French horn just outside the car. For the record, the decibel level at the horn was 118.

My test car was a brilliant sparkling “Polaris White”, but inside, the Jag features a dark blue leather interior that looked and felt rich.

Seats are wrapped in a soft creamy dark blue leather, as were the door inserts, and dark wood trims the dash and doors along with chrome on the doors and armrests. The soft suede headliner was a medium gray.

All that leather no doubt aids the car’s quietness and allows passengers to fully enjoy the Meridian sound system in comfort. Plus overhead are twin sunroofs so despite the car’s sizeable interior, which will seat five adults, there’s plenty of light in back if you retract the rear roof’s shade. Manual sun shades are standard for the rear seat’s side windows too and small lighted mirrors fold down out of the roof for back seat passengers, who also have heated and cooled seats, just like the seats up front.

The test car added massaging front seats, and why not for just $800. They’re certainly not a must, but delightful nonetheless. After about 10 minutes of back massage they automatically turn off. You control these via the nav/radio screen.

There’s also a heated steering wheel to keep the driver’s hands warm in winter, a big plus during our latest cold spell. A note on the front seat heaters, like the massage feature they must be adjusted through the nav/radio screen, which is a tad awkward since a driver uses these so regularly in winter. I would prefer buttons on the console that leave the seats on, even when the car’s ignition is restarted.

This Jaguar also comes with paddle shifters on the power tilt/telescope steering wheel. Those are easy to use and control the car’s shift points, if you desire even more power from a standing start.

As for controls, everything is easy to see and find on the dash, or steering wheel hub. The main gauges are projected, which looks fine, but I’d prefer attractive real gauges at this price. Jaguar’s video nav/radio screen is large and most buttons big enough to see and logical enough to figure out quickly. The touchscreen requires you take off your gloves to engage it though.

I like the three-setting memory buttons on the door that allows both the driver and front seat passenger to program in three desired seat positions. The driver also has two buttons to adjust the seat’s side bolsters, and both front seats have power-adjusted head rests and lumbar support.

A couple niceties you don’t get in every luxury car?

The large overhead front seat lights turn on with the slightest brush of your hand, negating the need to find a button to press in the dark. Jaguar also uses several small lights to give passengers some ambient nighttime visibility.

On the safety front there’s a backup camera displayed in the video screen, plus the Jag features a blind-spot warning system.

A few less than charming features include a narrow driver’s seat butt pocket, which a friend who has an older Jag says is a concern for him in his car too. That should be corrected. Jaguar, now owned by Tata Motors in India, also loads up the console with chrome, including its fancy rotary gear shift knob that powers up out of the console. On sunny days all that chrome becomes distractingly reflective. Lucky for us the sun rarely shines in Wisconsin this time of year.

Jaguar’s front and rear parking sensors also remain overly sensitive, often beeping repeatedly while the car pulls into, or out of, a fairly wide parking space. Quite annoying. Also, oddly enough, the sun visors do not slide or have extenders. That said, they do pretty much fill the side window when folded to the side.

Trunk space is 15.2 cu.ft., about standard for a normal family sedan, but small for a luxury model and about 3 cubic feet less than the monster Lexus LS460 trunk. There is loads of legroom front and rear, but many may prefer that a little more of that space had been provided for cargo room.

All told, the XJL remains near the top of the luxury sedan list, but has the advantage of distinctive looks, sporty performance and a heritage that many other newer luxury makes can only wish were in their DNA.

Misses: Smallish trunk for a luxury sedan, parking sensors remain too sensitive, driver’s seat butt pocket a bit narrow and chrome on console can be too reflective on sunny days.

Made in: Castle Bromwich, U.K.