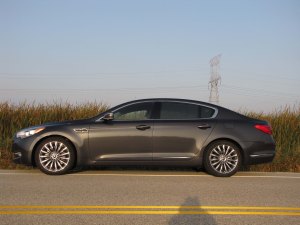 Established luxury makes may want to check that rearview mirror as Kia and its cousin Hyundai are gaining on them, rapidly.

Case in point, the new Kia K900, the separated-at-birth twin to Hyundai’s luxurious Equus. Both the K900 and Equus are ladled with luxury features, look as luxurious as any full-size luxury sedans on the road, and are as quiet as Miller Park in October – quieter!

Sound deadening and a smooth-running 5.0-liter V8 create an interior that could pass for a sensory deprivation tank, if you close your eyes. You won’t want too though because the interior looks great too and cradles you in its soft leather trimmings.

Did I mention that you’ll pay on the order of $10 grand less than a “traditional” luxury make?

Consider the K900 starts at $59,500 and even at that price you get much of the luxury trimmings that came on the metallic gray test car, which added a $6,000 VIP package to push this to $66,400, including a $900 delivery fee. A Lexus, Audi, Mercedes-Benz or other full-size European luxury sedan will run you considerably more. But then their logos have been around longer.

Certainly value is a big part of the Kia’s story, but while value talks, performance walks. That is, it puts you in the hunt for luxury sedan buyers’ stock option checks.

The rear-drive K900 pushes away from stoplights with pep in its step and easily hits highway speeds halfway down an entry ramp. Put it in Normal mode via the console-mounted button, and the speed is steady and smooth, just less robust. Drop it into Eco, and, well, you’re trying to save gas so just sit back and enjoy it. An 8-speed Shiftronic automatic is flawlessly smooth in putting the power to the pavement too.

Ride is incredibly well controlled. Only the Equus I drove early this year comes close. I know where some of the Milwaukee area’s worst streets are and this sailed over those with barely a vibration delivered to us mortals inside. While soft and controlled it does not feel floaty like many earlier full-size domestic models.

Steering effort also is moderate, so easy to control city or highway. What you give up here, compared to the European makes, is some steering precision. Steering is moderately vague, but an improvement from earlier Kia and Hyundai models I’ve driven over the years. There is a little body lean in tight turns, but you aren’t buying this to race it.

I felt the Equus actually handled a little better, but that could have been the individual car, tires or weather for that matter. I tested it in winter and it handled extremely well. The K900 came with R-rated 19-inch tires, same as the Equus.

Braking is quick and precise and along with ABS there is traction and stability control. 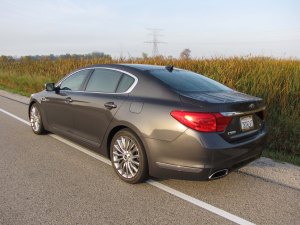 Gas mileage isn’t a selling point for the Kia, the EPA rating the K900 at 15 mpg city and 23 mpg highway. But at least there’s no gas guzzler tax. I got 20.8 mpg in about 70% highway driving for the week. Standard unleaded is fine. The Equus I had tested called for premium, but also had 9 more horsepower. For the price difference in gas, the 420 horses will do. I also only got 15.4 mpg with Equus, but it was driven in the dead of winter.

Inside the test car featured dark gray leather with gray stitching and slim wood trim on the dash and doors and console. That’s trimmed in a thin chrome look and there’s black gloss trim on the door armrests and steering wheel hub.

That wheel is a power tilt/telescope model and includes radio, phone and information center buttons, plus a heated steering wheel button below the hub. The wheel heats quickly, but just the 3/4ths that are leather, the upper rim is wood. This wheel also powers back and up when the ignition is turned off to allow easier entrance and exit.

Kia delivers a quiet, handsome interior along with a dash featuring large buttons on the center stack and a large navigation/radio screen. Main gauges are easy to see and understand, day or night. On the console are a variety of screen-related buttons, some more intuitive than others, but the big knob that controls much of the radio isn’t user friendly while you drive. Many drivers would still like 5 or 6 radio pre-set buttons on the dash instead of this cumbersome setup.

The console includes a button for the power sunshade in the rear window, and rear seat folks can also pull up manual shades on the side windows.

It’s possible you’ll have several folks in this back seat too, as leg and headroom are sizeable and the seats comfortable, just like those in front. The rear seats even partially recline, have power lumbar support and are heated too. That’s all part of the $6,000 VIP package that also includes items like a projected digital dash cluster, power front seat headrests and leg cushion extension, adaptive cruise control, surround view monitor, head-up display and power door latches.

Front seat folks get power seats that are heated and cooled to three levels and are extremely comfortable with good support top and bottom. Power seat controls and two memory settings are on the door panels, so easy to find and adjust. Mirrors on the car’s big A pillars also include a blind-spot warning system.

Overhead is a panoramic sunroof opened by a single push of a button. Likewise the trunk opens with the push of a button on the key fob and powers closed too. Cargo space is extensive at 15.9 cubic feet, so several sets of golf clubs will fit, or a month’s worth of luggage for a long road trip.

Press the key fob button to lock the push-button start car and the side mirrors light up and fold flat to avoid parking lot damage. Their lights also give you a bit more security at night as you can see where you’ll put your first step.

In fact, there’s not much lacking in the K900 as far as amenities, comfort and convenience. The fact that you can save some serious coin while riding around like a big shot is just so much the better.