Back in the day, which wasn’t long ago, Nissan’s Pathfinder was a sport-utility truck that was truck tough and set for off-roading and hauling gear. 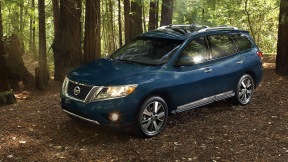 Today, like many of us as we age, it has gotten a little softer and is tailored now more for comfort. Oh, it can haul and is available with all-wheel-drive, but you are not going to take this off road. In fact, with its remodel for 2013 it is pure crossover, leaning toward minivan. That’s because it’s no longer truck-based, instead riding on the Nissan Altima sedan’s platform.

If mall cruising and hauling a family is your main purpose, the Tennessee-made Pathfinder is accommodating. Its interior is spacious, like a minivan, with oodles of head and legroom in the first two rows of seats, plus a third row is standard and folds easily into the rear floor to boost cargo room.

I like it’s easy to slide second row seats that also will fold down for cargo carrying. Getting into the third row seats is easy, but a little short of foot space, like most large crossovers. The assumption is you’ll put kids (under 10 and with tiny feet) back there.

With all the seats in place you can get 16 cubic feet of cargo in back, plus there are roof rails to hold more gear on top. These are standard, starting on the SV models and up. Space behind the first two rows is almost as much as the recently tested Mazda CX-9, which has better looking sheet metal. But the Mazda holds nearly 20 cubic feet more when you fold down both the second and third row seats, according to the two manufacturers’ cargo numbers. 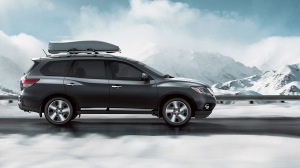 The Pathfinder will pull a bigger load though, its towing capacity being a decent 5,000 lbs. compared to 3,500 lbs. for the Mazda.

Pathfinder has a stout 3.5-liter V6 that creates 260 horsepower, and links that with its excellent Xtronic CVT. The continuously variable transmission virtually eliminates the feeling of gear shifts, smoothing the crossover’s pulling power and acceleration and it works beautifully with this engine.

Acceleration is good, but not overly strong because at 4,381 lbs. the Nissan still feels heavy, although 170 lbs. lighter than the CX-9.  Getting up to highway speeds is no problem, but if you need the power quickly you’ll pay for it with a pretty growly engine during heavy acceleration.

Ride is what you’ll treasure with the Pathfinder though. Gone is the truck-like bounce and jiggle. The four-wheel independent suspension makes this feel much more like a large sedan or minivan, pretty plush. Ride is cushioned and controlled and comfortable, all aided by a lengthy 114.2-inch wheelbase.

Handling? Well, a minivan by any other name still feels a little vague with some wheel play. Cornering is fine. But you’re after comfort and civility here, not crisp handling. 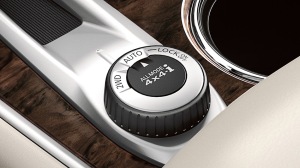 AWD is controlled via a knob on the console. So you can go two-wheeling if you want, or leave it to automatically choose when you need more traction, or lock it into a 4-wheel-drive mode.

Inside, the test crossover had black leather seats and a black textured dash with dark wood-look trim on the center stack, console and doors. There was a leather steering wheel and pewter-look trim around the air vents, console, door handle surrounds and video screen. This looks like, but styling is pretty plain.

While this SL is one down from the Platinum, the vehicle still came with heated front and rear seats (a little slow to warm though), a standard backup camera and power rear hatch, plus the leather seating. Everything was comfortable, with the seat being relatively flat, with only minor contouring. The driver’s seat was powered and has two memory settings. The seat also powers back from the tilt/telescope steering wheel once the vehicle is turned off.

Climbing in and out of the Pathfinder is on par with other big crossovers and minivans, but the doors remain standard opening style, not sliders like on a minivan. That’s probably better if your kids are a little older.

While generally fairly quiet on the road, I noticed more wheel well noise here in wet conditions than I’ve noticed of late in other crossovers. Pathfinder’s main dash gauges are easy to see, but I found the radio and other information buttons to be busy, especially all the screen status buttons for brightness, etc., near the center dash info screen. The steering wheel hub is loaded up too. A bit of information overload here.

That info screen gives you your gas mileage data and radio info, but there are 6 tiny channel selection buttons below it. Not easy to use when wearing gloves. The climate controls also include a lot of buttons beyond the three main dials, again, too much to futz with while driving.Oddly, there was no navigation system, a strange thing at this price, but maybe production models will include that feature.I like the big armrest and storage bin between the front seats and overhead the visors slide, so a bonus point there.

Nissan proudly says it has dropped nearly 500 pounds in body weight from this new Pathfinder, a major weight reduction. That means the Nissan is rated 19 mpg city and 25 highway by the EPA and gets 1 mpg better in 2-wheel-drive models. But I got just 17.9 mpg in about 60% city driving, with a little snow on the roads. That was disappointing, but still way better than the 14.6 mpg I got in the Mazda CX-9 a couple weeks back.

Final word? For comfort and for hauling a larger family the Pathfinder will do nearly as well as a minivan. It’s pleasant to ride in and will blend into suburbia with the best of the crossover crowd. If you’re looking for a true SUV the Pathfinder is not the answer anymore.FAST Stats: 2013 Nissan Pathfinder SL AWD

Misses: Feels heavy and more engine noise than expected on heavy acceleration, plus wheel well noise in the wet. No navigation at this price?