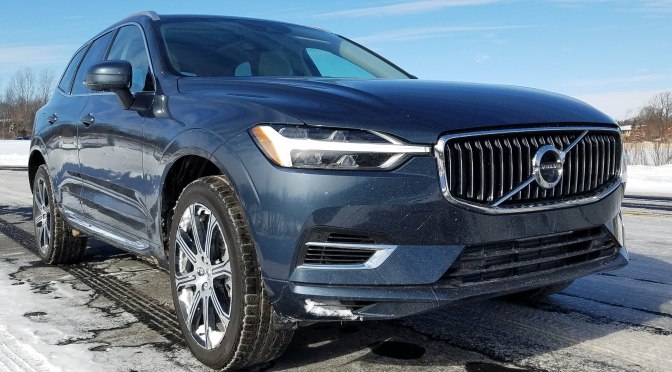 A few years back I tested Volvo’s smallish mid-size crossover, the XC60, and was swept clean out of my cross-trainers.

At the time, most crossovers were blah lookers and ho-hum performers, but today’s market is moving, as they always seem to, toward performance, and yet smaller carbon footprints. Well, the 2021 XC60 Recharge T8 Inscription (a crossover so nice they named it twice, or thrice) is all over that trend, and actually was among the leaders.

That’s because this crossover is both a looker and performer, while also being luxurious. Now, the Recharge model adds a plug-in hybrid system to reduce its emission transmission.

How so? Well, first Volvo created a dandy 2.0-liter supercharged AND turbocharged I4 engine that it has used all along. It’s more fuel efficient and generates a tremendous amount of power and torque (turbos and superchargers are torque monsters).

But in the tested Recharge, which adds an electric motor to power the rear wheels while the gas engine powers the fronts, horsepower grows to 400 and torque is a monster 472 lb.-ft. Suffice it to say there’s plenty of giddyup, making the Recharge a hot rod when getting on the freeway or escaping congestion at a stoplight.

Now know that there are a variety of drive modes controlled via a roller dial on the console. Hybrid allows the batteries to power the rear wheels and meld seamlessly with the gas engine to aid gas consumption. There’s also a Power mode that puts all the giddyup pressure on the gas engine, or Off-Road or Constant AWD modes to give the wheels more traction.

Here’s the thing though. I had this during several of our February snow dumps and while traction was good, there always was some wheel spin, especially under acceleration. My slalom test also allowed the crossover to slip and skate a bit, even in Constant AWD. I would warn to not be overconfident when traversing several inches of snow. Again, normal snow driving in a straight line and moderate speed turns was fine.

On the praise side, the SC60’s ride is stellar, smooth and well-cushioned. I hit my favorite rustic road and other than slowing to not flatten a tire in a pot hole the ride was luxury sedan comfortable. This model added a $1,800 4-corner air suspension which helps that ride.

Likewise, handling is light and easy with a sporty feel. Turn-in at corners is precise, creating an entertaining driving experience on the back roads. 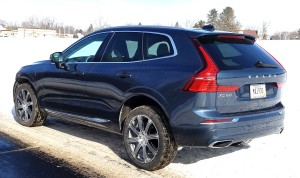 Back to the hybridness of this XC60. Most hybrids get their fuel mileage increase from regenerative braking that charges batteries to aid the vehicle at startup and low speeds, thus extending gas mileage. That’s part of the gig here, but there’s also a plug-in system to fully charge batteries to provide roughly 20 miles of electric-only power.

I’ll admit to only charging via that system once, for five hours and got 12 miles of range. That’s not bad and certainly an overnight charge would give the full 20 miles or so on a standard home 110-volt line. Volvo says using a 240-volt line will fully recharge in 2.5 hours.

So, if you’re still commuting to an office for work, it’s likely you could make it there and maybe part way home on a night’s charge, then the gas engine kicks in and the EPA says that will average out to 27 mpg with the blend, or the equivalent of 57 mpge solely on electric. I got just 18.4 mpg in a mix of city and highway, but with only one short charge. My bad that I’m blaming on snow and super cold weather. Also, the 12-mile charge went by in about 8 miles, again as it was about Zero outside during that part of the test. Note too that the Volvo prefers 91 octane gas. 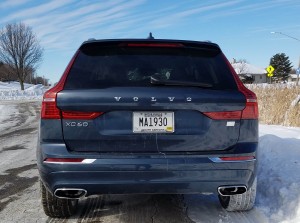 As with most luxury crossovers the XC60, especially in this near top-level trim, is loaded with safety gear, including City Safety, which provides high and low-speed collision avoidance and helps watch out for pedestrians, animals and cyclists. Likewise there’s blind-spot warning, steering assist, cross-traffic alert with automatic braking, a driver alertness system, lane departure and anti-run-off road systems, plus park assist.

Unlike many brands that charge extra for a couple of those systems, they are all standard here. The only add-on was a smart cruise control system that was part of a $1,900 Advanced package that also included a 360-degree camera, head-up display, and wireless phone charging.

Despite the XC60 Recharge Inscription starting at $61,990 including delivery, there were some other add-ons though, but not for safety.

The Climate package goes for $750 and includes heated wiper blades, integrated booster cushions in the second row bench seat and a heated steering wheel. Most impressive, both for cost and performance though was the $3,200 Bowers & Wilkins sound system with 15 speakers. Wow, it rocked enough that even a couple passengers commented on its sound quality.

While the XC60 is sharp looking with smoother lines and lower hood angle than most crossovers, it also touts a handsome grille and nose, plus taillights that wrap around its rear hatch window for a unique look.

Still, this one upgraded that look with a Denim Blue Metallic paint job for $645 and snazzy 20-inch 8-spoke black alloy wheels for another $800. Your call, but both look sharp.

Happy news though, the interior is already luxury level quiet and offers minimalistic Scandinavian styling. This one had an oatmeal shade of leather for the seats and door trim, plus a black dash top with gray woodgrain trim extending to the doors and a bit on the console, all edged in chrome. The Bowers & Wilkins door speakers have snazzy chrome covers and there’s a metal twist knob on the console to start the crossover. Most vehicles use a push button, but Volvo, now owned by a Chinese firm, continues its tradition of a somewhat different ignition in the console. Oh, and the shift knob appears to be a cubic zirconia crystal too. 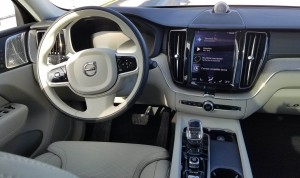 Volvo continues to offer a vertical 9-inch touchscreen that looks like an iPad. It’s easy to see and use on the home screen, but once you enter a category you must swipe it to the left to find all the hidden treasures below. That’s when it becomes less user friendly. There are a LOT of choices and it’s hard to remember where everything is, plus it becomes distracting to use while driving. Best to make any serious adjustments prior to setting the vehicle in motion.

Seating is superb with power heated and cooled front seats with two driver’s seat memory buttons. Plus the power settings allow the driver to adjust the firm side bolsters or extend the lower seat cushion, useful for tall drivers. Volvo’s seats are among the best on the market for comfort and support, plus being so adjustable is a big plus.

There’s a heated wheel too, with three temp settings, a big panoramic sunroof and shade overhead and heated rear seats.

Cargo room is a generous 22.4 cubic feet behind the second row and that grows to 63.3 cubic feet when those rear seats are lowered, manually. Good space for a family of four and their luggage. Plus if you need to tow something, the XC60 is rated to haul about 5,300 lbs.

The test crossover ended up at a substantial $71,340 which is competitive with the likes of an Audi Q5 or BMW X3, but a few competitors are a bit less pricey, consider the Acura RDX for example.

But you needn’t push that $70 grand price tag as the Momentum is well equipped at $42,000 and you can add AWD to any model for $2,300. The base XC60 Momentum includes leather seats, the panoramic sunroof, power liftgate, dual-zone climate control, LED headlights, 10-way-power front seats and 18-inch alloy wheels.

For the record, Apple CarPlay/Android Auto is standard, as is a 10-speaker/330-watt audio system, so you don’t HAVE to spring for the awesome B&W monster. A hybrid version of the Momentum starts about $55,000 and note there’s a federal tax credit of $5,000 available. 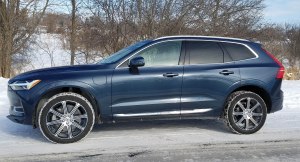 Or you can move up to the T6 R-Design front-drive model and get the 316 horsepower engine at $48,500. Need even more power than this Recharge Inscription? Volvo’s top line is called Polestar and in the XC60 it punches horsepower to 415, starting at $70,000.

All are stylish, fast and fun to drive, with more than enough luxury to make everyone inside feel special.

Misses: Still some slipping on snowy streets despite AWD, plug-in charging takes time and charge drains quickly in cold, plus touchscreen use (beyond main screen) is distracting to use while driving.