Finally a model of the Volvo Coupe that became Polestar 1 …

For much of its modern history Volvo has been the maker of boxy utilitarian vehicles known for their safety. Sexy was as foreign to its styling department as polkas are to Shakira.

But even a dowdy car company like Volvo can change and by 2013 it had committed to more elegant, and some might say, moderately sexy design. Hence the Volvo Concept Coupe, one of three show cars that set Volvo’s styling tone for the future.

DNA Collectibles loves stylish cars, and quirky cars that other die-cast manufacturers have avoided. You might say style is in the company’s DNA. (Groan!)

The Volvo Concept Coupe was designed by Volvo’s then new senior VP of design, Thomas Ingenlath, and was one of three concepts that debuted at major auto shows for Volvo in late 2013 and early 2014. Its purpose was to stir emotions and show the auto world that Volvo could make great-looking cars on its new Scalable Product Architecture platform.

In particular, the coupe’s nose previewed future Volvos, starting with the XC90 large crossover that debuted in 2014.

Ingenlath said the Concept Coupe’s design reflected the “calm, confident beauty that is the hallmark of Scandinavian design.” Many agreed.

In practical terms it meant the car’s cabin moved rearward a bit and the nose grew in proportion to modernize the car’s lines compared with previous Volvo models. In addition, the hood was lowered, the fenders rounded and sculpted with a beltline that added some muscle and flair nose to tail. The car also rode on giant 21-inch wheels that boosted its muscular profile. 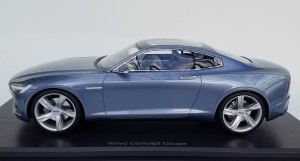 In the concept the front wheels were powered by a turbocharged and supercharged 2.0-liter 4-cylinder engine, something that continues in its lineup today. An electric motor drove the rear wheels as the car was a plug-in hybrid, again a harbinger of things to come for Volvo’s line. Total power was 395 horses.

And in case you’re thinking you’ve seen the coupe recently in car mags, etc., well, Volvo’s subsidiary Polestar has made the car a reality, renaming it the Polestar 1. Polestar’s goal is to become a top-end performance electric vehicle maker and Polestar 1 is its first vehicle. Like the Volvo concept it’s a hybrid with 60-mile plug-in electric range, 619 horsepower and a price tag to match at $155,000.

Still it’s a beauty, as DNA proves here in a more affordable scale. 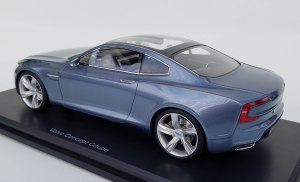 DNA’s version is just 10 inches long and as slick looking as its full-size original. The body is beautifully sculpted from resin and like all DNA products is a sealed body and a limited edition. DNA frequently makes only several hundred of a model, not the thousands that some DC makers turn out.

Styling makes this a rare beauty, but its blue-gray paint scheme is flawless and looks as great on the model as the 1/1 car, or a Polestar 1. Photo-etched parts create fine detail here with chrome edging around the side window opening, , the roofline front to rear, gorgeous door handles and an awesome grille (a bit Buick-like IMHO) with large Volvo logo.

Up front there are the unique T-shaped headlights that Volvo now calls Thor’s Hammer headlamps. There’s also fine black plastic grate work under the grille and below the headlights in the air inlets. The red taillights are a signature styling detail with their hooked C shape that perfectly flows into the lines of the trunk and rear quarter panels.

Volvo lettering graces the trunk’s rear edge too and there are chrome surrounds on the twin exhaust pipes. A license plate simply says Concept Coupe.

Then there’s a small flap in front of the driver’s side door that carries a Plug-in Hybrid label and is where the car’s electric battery charging occurs in the 1/1 car.

DNA also perfectly matches the original’s oversized five-spoke sport wheels with a Volvo logo on the center hub. Behind those you find giant disc brakes with a pattern to match the drilled rotors on the concept car, plus detailed silver calipers. Tires are treaded, but not branded.

Making this model especially interesting is a see-through roof panel with black trim and a short black insert that corresponds to the console beneath. This makes it easy to see the sharply detailed interior including the racy bucket seats front and rear with fabric shoulder belts and PE harness clasps.  Seats are gray with indigo seat backs and carpeting to match the stylish interior of the original. 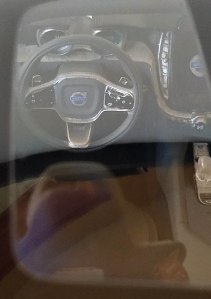 Dash and console details also are impressive with a crystal-like shift lever on the console, just as the concept featured. There appear to be inlays in the dash that represent the naturally aged wood trim on the concept car, plus buttons on the doors above chrome release handles and around the large infotainment screen mid-dash that simply displays a Volvo logo. Would have been clever for the screen it playing an ABBA album.

The steering wheel hub also has buttons on the spokes and there’s a head-up display represented atop the driver’s side dash.

For the record there’s no detailing on the car’s bottom, but it’s securely fastened to its black plastic base. The whole thing comes in a nice window box that’s fine for display, or you can easily slide off the support pieces from the ends of the base and put an acrylic display case over the model and base.

DNA continues to impress with its beautifully sculpted and detailed models of cars few other DC manufacturers have tackled. DNA is heavy into Volvo, Saab, Subaru, Audi and Volkswagen models that are on the fringes, yet have a loyal following in the car world.

No, DNA doesn’t make Ferraris and Lamborghinis, or U.S. muscle cars. But thank heaven DNA has taken a totally different product path. A reminder too that you can order models directly from the DNA website.