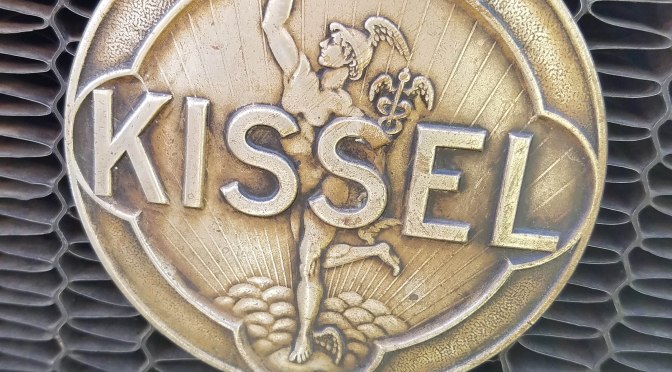 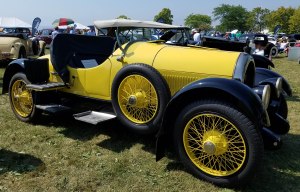 Forgive yourself if you’ve never heard of the Kissel Motor Car Company, originally known as KisselKar, with the curious moto of “Every Inch a Car.”

Founded by Louis Kissel and his sons back in 1906 when cars were still a new-fangled means of conveyance, Kissel cars lasted until 1930 when the Depression sunk it in a sea of red ink. The firm made more than 27,000 vehicles in its 25-year run.

While its factory in Hartford, Wis., about 35 miles northwest of Milwaukee, was out in the sticks, its cars were known to the elites of society from coast to coast. Most notable was the Gold Bug, a speedster with good power and a spiffy Chrome Yellow paint job that became its iconic color calling card.

The speedster originally was a two-seater, but had crazy slide-out suicide-type seats on its sides that would allow two extremely brave passengers to ride along, no doubt with a death grip on the seats or car’s cockpit sides.

I first saw the Gold Bug at the Wisconsin Auto Museum in Hartford, a terrific museum adjoining a splendid theater back in the 1990s when I reported its founding for the Milwaukee Sentinel. The museum is in a restored pickle factory and features Kissel, Nash and American Motors Corp. vehicles, all made in Wisconsin. Plus it has a wide range of cars and trucks in its collection, and a bonus for railroad fans, a 250-ton 1913 steam locomotive on display.

During our pre-Covid summer of 2019 I again spotted the 1923 Gold Bug at the Milwaukee Concours d’Elegance at the lakefront and I snapped a few more photos of it, which stirred this remembrance.

For the record, Kissel’s first speedster (think competitor to the iconic Stutz Bearcat) appeared in 1918, during World War I. Kissel, by the way, supplied trucks to the U.S. military during the war, and also sold ambulances and trucks to the Kingdom of Serbia about this same time.

But the speedster that became Gold Bug grew in popularity among the moneyed celebrity class and eventually a rumble seat was added so it would seat four more safely and comfortably. By 1925 Gold Bug sprouted an 8-cylinder engine to go along with the 45-horsepower 6-cylinder in this 1923 model. The car rode on a 124-inch wheelbase, a bit longer than today’s Ford Expedition SUV, so it wasn’t small.

While Kissels sold well until the Depression, of the thousands made, estimates are just 150 survive, and the Hartford museum has 27.

A couple more interesting bits about Kissel, beyond the Gold Bug and that unusual motto. Its logo was the Roman god, Mercury, which you can see on the medallion on its radiator.

By 1938 when Edsel Ford was launching the Mercury brand for Ford, it needed a logo. The Roman god was a natural choice, but it needed Kissel’s permission to use it on a car, which Kissel granted, since it wasn’t using it anymore.

And lastly, Kissel kept going by making outboard motors, a major product made in Wisconsin over the years by various brands. In 1935 Kissel supplied outboards to Sears Roebuck of all places, so had nationwide distribution.

Later, the brand was sold to West Bend Aluminum Co., which was famous for its cookware and appliances, and was a noted Wisconsin manufacturer for many years, before it too was sold. West Bend’s engine division (an odd combo with cookware) was later sold to Chrysler, sort of completing the automotive circle.

It’s funny the twists and turns of the early car world, but it makes for interesting history.

PS: For train lovers, here are a couple dark shots of the 1913 steam locomotive inside the Hartford museum!