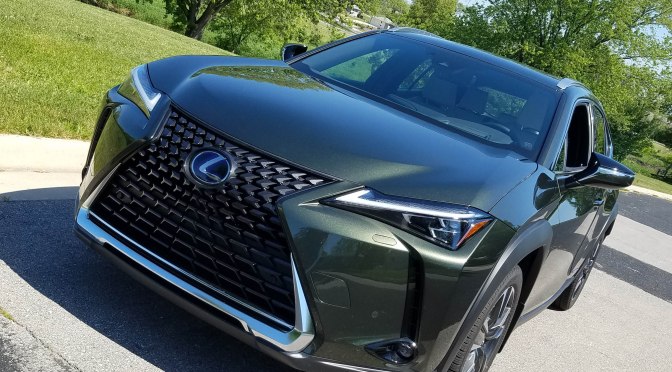 Whatever it is, little Lexus hybrid is a cute mileage champ … 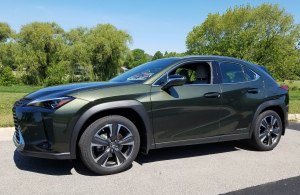 Determining if a vehicle is a hatchback or a crossover can sometimes cause consternation. Take the case of Lexus small hatch/crossover, the UX.

That name provides no clue as to what this is, other than there’s an X in the name, so the vehicle designers probably considers it a crossover. Most of the time crossovers offer AWD or 4WD and again, the UX sort of splits the difference.

In its hybrid form, the tested UX 250h comes with limited AWD, meaning it sometimes drives all four wheels, but mostly is front-wheel drive. OK, that’s not all that different from some crossovers, but when dealing with Lexus I expect more of a commitment to being one thing or another.

I drove the gas-only powered UX 200 about 18 months ago and indeed, find the hybrid just as cute as that model, mainly because they look identical, other than the “hybrid” badge on the car’s lower side body panel.

But I prefer the hybrid as it offers both more power and superior gas mileage. One would expect the latter. 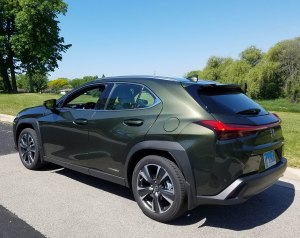 The UX is basically a two-person crossover with a back seat for infants as there is minimal legroom in row two, and this comes from a family of shorties where our seats are often near their forward-most settings. Plus the driver’s seat powers back automatically once the ignition is off, which could trap the feet of a less than observant rider sitting behind the driver.

Yet the UX is cute with stylish, edgy exterior lines and snazzy finned taillights that are a reminder of 1950s cars, but with fins that are clever, not garish. This hybrid version also delivers gas mileage that could make a tree hugger swoon.

I got 44.8 miles per gallon in more than 300 miles of city and some highway driving, about a 70/30 mix, heavy on city. The EPA rates the hybrid UX at 41 city and 38 highway. It’s rare I beat the EPA guesstimates. So the hybrid is to average 39 mpg while the gas-powered UX averages 33 mpg. Yet the hybrid only costs about $2,000 more than a gas-only model. 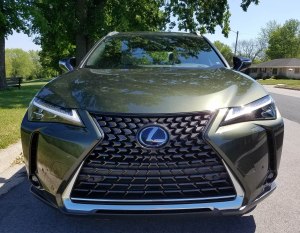 Power also is better for the hybrid, as is often the case as electric motors feature instant torque while gas-powered engines must build their power more gradually. In the 250h the gas and electric systems create 181 horsepower vs. 169 hp for the UX 200 powered by a 2.0-liter 4-cylinder.

So power and fuel economy are solidly in the hybrid’s favor. Otherwise the cars feel about the same.

While power is better here it’s still not neck stretching. Even with its electric motor the 250h feels a little low on power in Normal mode, which is what the car defaults to. A handy knob atop the instrument cluster hood allows a driver to select Sport or Eco. Sport delivers a touch more low-end power and slightly stiffer steering effort, while Eco is rarely needed unless you’re purposely trying to see how high you can push your fuel economy numbers and don’t mind all that honking behind you.

Handling is quite good, which gives the car a slightly sporty edge. Steering is precise and made even better in Sport mode. UX turns into tight corners well and is extremely easy to park. 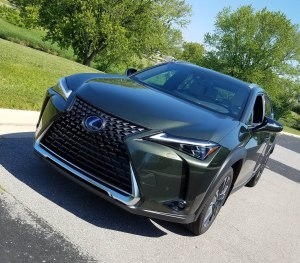 Ride, well, I wasn’t as wild about that. Seems the car takes a bit of a jolt on pot-holed side streets and I found myself playing dodge ems with the many sunken manhole covers in suburban Milwaukee streets. Luckily, the car handles well enough to miss most of them.

Another note on handling. The UX has all the expected safety devices thanks to Safety System 2.0 being standard. But the lane assist feature was way too sensitive on the test car, giving it a bit of a pinball effect as it bounced back and forth between a road’s centerline and side markers. I turned it off and handling was much improved.

I liked the test car’s Nori Green Pearl exterior, a dark metallic green that several observers said looked like the Army decided to go with a metallic paint scheme. It’s a deep, rich green and sets the car off from all the gray models in parking lots. 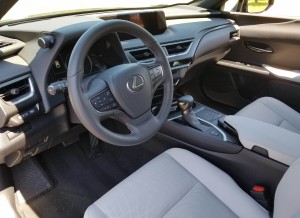 UX’s interior was equally rich with light gray perforated leather seats featuring black trim along with a black dash and door panels, with gray armrests. The heated steering wheel ($150 extra) also was black leather and the console matte black, which kept it from being too reflective. Bravo! Air vents were a matte chrome to complement the interior’s modern motif.

But as modern and stylish as the UX’s interior looked, it also seemed busy. There’s a huge infotainment screen atop the dash, yet it includes an analog clock in the left corner, which seemed out of place among all the digital readouts. Plus Lexus sticks with its awkward touchpad system to adjust the screen. I’ve been on record despising this clunky system, and still am.

Yet I could find everything for the heated and cooled front seats, plus all the climate controls which are managed through large toggles on the dash. 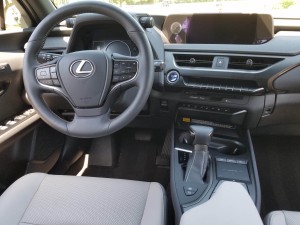 The steering wheel is power tilt/telescope with oodles of buttons on the hub, plus smart cruise control, which worked well. Overhead is an SOS button and HomeLink controls on the rearview mirror, plus a power sunroof is standard.

Not standard is a wireless phone charger, but it’s only $75 extra. Yet the charger is under the center stack and your phone virtually disappears when you slide it in the charger. Very easy to forget when you get out of the car!

There were a lot of other options here that pushed the UX’s price a bit higher than I’d expected. Base for the 250h Luxury model, the top line, is $40,575 including delivery. But the options bumped that to $44,555. There are a lot of other small yet roomier crossovers or hatchbacks at that price, or lower. Think Honda CR-V for one. 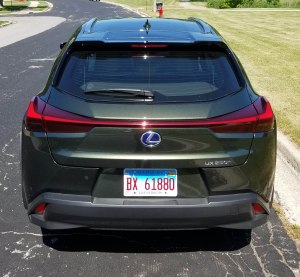 Note that the hybrid UX offers less cargo space than the gas-only model at 17.1 cubic feet vs. 21.7. Many hybrids offer less trunk space as batteries eat up a little cargo room.

Of the many options on the test car I’d only question the addition of head-up display for $500. I find I rarely need it, or use it.

The UX 250h is a fine hybrid if you rarely need to carry anyone in the back seat that won’t fit in a child’s car seat, and if the ride suits your tushie!