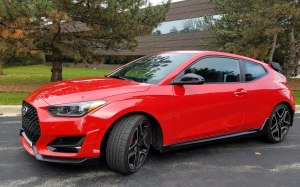 The day after Hyundai’s Racing Red Veloster N arrived, it snowed. I know, it’s too early, but it snowed. It was exactly the wrong time to have this peppy high-value street racer, this boy (and girl) toy that is perfectly aimed at the bullseye that is the youth market.

On dry pavement this Veloster N is a hot hatchback that rocks like it’s meant for the rally circuit. In fact, last May I got to rallycross an N on Road America’s go-kart track and it was one of my favorites. It handles and it’s quick. Plus the racetrack was smooth, so no ride issues.

Put the N on snowy slick streets with its summer low-pro Pirelli R19 P Zero tires and, well, hold on. You must be gentle with the clutch and gas pedal and still, be extra cautions as the Veloster will want to imitate Bonnie Blair and skate.

It’s not really fair to review such a car when it’s outside its element, and it was in the snow. To be fair, most of us would use all-season tires on the car, or have switched to a more effective tire by late October when wet, and even snow, can encourage any car to slip slide away. That said, the Veloster N is a perfect hot hatch for California, Florida and other warmer, drier climes than Wisconsin.

So let’s consider its attributes when driving on dry or only modestly damp roads.

It’s a tough little hatch whose styling you’ll either love or think it too radical. For the later folks, consider the Kia Soul R-Type I drove a few weeks back. It’s more practical and a cute boxy thing. For the more daring, the Veloster looks like you mean business with its aggressive stance and monster grille, all accentuated by its sporty 19-inch alloy wheels and those low-pro tires.

You feel like your butt it just hovering over the pavement you’re so low and you certainly feel in touch with the road, maybe a tad too much unless you’re young enough to just be out of college, or even high school. Ride is rough on Midwest roads, and there’s a considerable amount of road and exhaust noise. Granted the exhaust tone sounds racy, and was fun, for a while. Still, even the younger-eared driver may tire of cranking up the radio to catch a few words and the beat of the latest country rock or hip-hop tune. 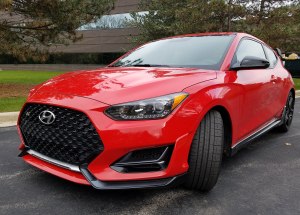 But if you can ignore that, or you have more padding on your derriere than this driver, you’ll have a blast in the Veloster N. The peppy 2.0-liter turbocharged I4 delivers a healthy 250 horsepower and a 260 torque rating. And the test car boosted that 25 horses courtesy of a $2,100 performance package. That package also adds the low-pro performance tires, fancy wheels, variable exhaust valve and special corner carving differential to keep the wheels from spinning and giving better grip.

Veloster’s power is instantaneous and muscular as you deftly slip through the six-speed manual gearbox. Throws are fairly long, but the shifting is easy. I killed the engine once on the first day of driving, but quickly reacquired the touch.

Handling is quick and precise, sort of go-kart-like in nature, but it makes the N feel like it was meant for the race track, not just tooling around town. No lean in turns, very stable feeling, the Veloster is light and lively at just a smidge over 3,000 lbs.

I’d love to try a Veloster N with all-season tires to see how much better the ride becomes, but as mentioned earlier, it’s tough on the tushie as the test car was equipped.

Braking is superb with the performance package also adding 13.6-inch rotors up front and 12.4-inch rotors in back, up from 11.8-inch rears. Plus the brakes feature red calipers for a sporty visual effect.

Outside you’ll also notice a major rear spoiler atop the hatch that will keep the rear end in place once you exceed 150 mph. Oh, wait, you won’t be doing that unless you’re on a race track. But still, that spoiler makes the N look like a serious performance beast.

Inside, the red Veloster featured black cloth seats with light blue stitching and blue seatbelts. Those are special to the N and when introduced at car shows Hyundai’s N debuted in Gulf livery colors, so baby blue with orange trim. The belts have stuck, but I’d prefer the car in that blue and orange to the red, even though the red is attractive.

Veloster’s dash is a black textured number with manual tilt/telescope leather-wrapped steering wheel. Door trim is the same while flat black trim is used on the console and dash facing. There are two blue buttons on the steering wheel too. (By the way, the wheel should be D-shaped in a sports car.) Those buttons are for changing the driving mode, namely the shift points. The button on the hub’s lower left will put it in Sport right away, and boosts the grumble and feedback from the exhaust. Way cool! Lower right on the hub the button with a checkered flag on it allows the driver to customize drive mode settings.

I liked the dash, which was youthful looking and easy to understand, with an 8-inch touchscreen. The radio includes both volume and tuning knobs, although a bit small. I also like the ring that glows blue around the start button, making it easy to see, especially at night. 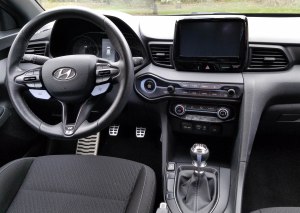 Seats are firm and supportive, more performance oriented for the N than in most small hatchbacks or a standard Veloster. A pump handle on the side allows a driver to raise or lower it to an acceptable height. Being a short driver, I found that a good selling point. All other seat functions also are manual, helping keep the coupe’s weight down.

Also working to keep its price down, the Veloster N doesn’t include heated or cooled seats, or a heated steering wheel. There’s also no sunroof. Basically the car is designed for two people. There’s a rear seat that has cramped legroom and headroom compromised by the car’s low roofline. However, in an interesting styling move, one used a few years back by Saturn, there’s a rear door on the passenger’s side, but none on the driver’s side, so sort of a 3-door coupe. While space is limited in back, the third door does make ingress and egress easier.

There’s reasonable storage space under the rear hatch, and the Veloster comes with a rear window wiper, a plus in Wisconsin. The N doesn’t include a wireless phone charger though, something the targeted younger buyers will surely want, along with a few of us oldsters. 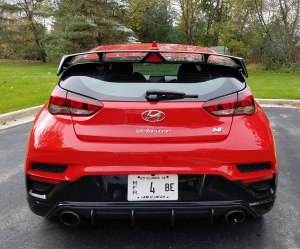 Economy comes in the Veloster’s pricing with the N starting at $27,775. That’s thousands less than, say a Honda Civic R-Type and in my eye, the Veloster is much better looking. Even with its much appreciated Performance Package, the test car hit just $29,885. Remember an average new car costs $35 grand or more and something with this hatch’s performance usually will go even higher.

For those not needing all this grunt and precise handling, but demanding cool looks, the base Veloster is a bargain-priced $18,500 with delivery. But go up to the R-Spec model, it’s just $150 more. A Veloster 2.0 Premium starts at $22,750, so you see there are a lot of choices here and none that will push your payments anywhere close to your student loan payments.

Gas consumption may be a bit more stout than you’d expect in a small hatchback with the N rated at 22 mpg city and 28 mpg highway. I got a disappointing 20.9 mpg in the cold snowy weather. And, this is odd, I needed a jump start the first evening I had the car. Don’t know what happened, but the radio was still playing when I exited the car, so possibly the push button start didn’t fully turn the vehicle off. After the jump it started every time, radio on or off!

If you’re in the right place, at the right time, namely somewhere with predominantly dry pavement, the Veloster N may be just the thing for you. At least be sure to get winter, or all-season, tires for when the seasons change so you have the right thing at the right time.