GT-Line’s turbo makes this the Soul you want  … 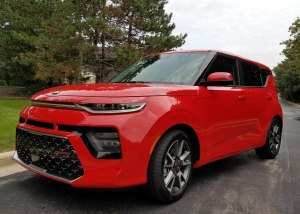 This may be overstating it some, but if ever there were a modern-day Volkswagen Beetle in both spirit and style, it would be Kia’s sweet Soul.

Consider that 11 years into its run the styling has been updated in tweaks to nose and tail, but the basic shape has stayed the same with its boxy looks offering a bit of swagger with its roof that tilts slightly downward in back. Somehow the look is sporty and fun, as opposed to the boring boxes on wheels, such as Scion’s XB and Nissan’s freakish Cube, that have come and gone, not to be missed. And this time around the headlights are thin slits with a light bar up front that sort of reminds of a Chevy Camaro nose. Fun!

Consider too that the Soul is inexpensive, but reliable transportation like the Beetle of the 1960s. It’s economical to run, gets good gas mileage and at its base levels remains fairly simple, considering today’s electronics-driven car world.

Now, for 2020 this third generation Soul remains true to all those Beetle-like traits, and its own DNA. But it grows a bit in wheelbase to 102.4 inches and adds an X-Line model and the tested GT-Line with a new 1.6-liter 4-cylinder turbocharged engine that absolutely rocks the car to its, well, Soul.

While past models with their fine 2.0-liter I4 that made 147 horsepower were cute economy models, the GT-Line goes all-in sporty, while remaining its stealthy self. Yes, there are 18-inch tires and fancier looking wheels. And there’s a GT-Line logo on the hatch, grille and fenders, but, few at any stoplight will know what to expect from this Soul when that light turns green. 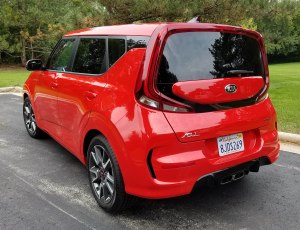 Kia’s fine 7-speed dual-clutch transmission helps the Soul GT jump from stoplights and power away with its 201 horsepower and 195 lb.-ft. of torque revving it up like a sprint car. That’s in Sport mode, engaged via a console button, but even in Normal mode the Soul GT runs up to highway speeds like a high-school sprinter.

There’s a slight downside, but not much. The front-drive Soul exhibits noticeable torque-steer under heavy acceleration as the wheels search for grip, but it’s easily controlled. Just be careful on wet pavement. Here’s where AWD would be a help, yet so far Kia hasn’t added that feature to Soul. Some thought the new X-Line might be primed for AWD because it adds body cladding to give the Soul a more off-road worthy appearance. Maybe in 2021!

Handling has always been light and easy in the Soul and the GT remains about the same, maybe a little more weight to the steering. Still, it’s a light car at just more than 3,000 lbs. And that makes it fun to drive, just sometimes needing grippier tires.

Ride is much better than most small cars and crossovers. That wheelbase stretch seems to have helped smooth rough city streets some. This still feels like a small car, but the bumps and pot holes are much better controlled than in most small vehicles.

Inside, of course the GT with the turbo is the top-level, the Soul is absolutely sporty and hip, or whatever term young folks are using. This is aimed at them and yet several of my middle-aged friends were wowed by the Soul GT’s looks. A MINI owner even admitting he would consider a Soul GT when it’s time to replace his sporty S model.

First, the interior is fairly quiet for a small car, with little wind or road noise. Kia’s sound deadening works.

But the tested Inferno Red (bright red with a tinge of orange) GT included diamond-patterned orange metallic inserts in the door panels that brightened the interior and gave it pizazz. The black dash has red stitching, as do the combination cloth and leather seats while the dash’s face, air ducts and console feature black gloss trim. The thick black leather steering wheel also sports red stitching, as does the shifter sleeve.

Looks are a plus, but Soul’s interior is roomy. That tall roof provides oodles of headroom, yet leg and knee room also are generous for a small car or crossover. A couple of 6-foot-plus friends rode in the back seat and were amazed by the leg and headroom.

The driver’s seat is powered, while the passenger’s is manual. Both are well contoured and comfortable, again much above average for this segment. Both front seats are heated, as is the steering wheel. Easily four adults will fit in the Soul, and cargo room is plentiful. There is more than 24 cubic feet of cargo room behind the rear seat, and up to 62 cubic feet if you fold down the rear seats.

The dash also is well laid out, plus the GT has a 10.5-inch infotainment screen, up from the 7-inch base model. The test car came with a built-in weather update app for that screen, plus above the driver’s gauge pod was a HUD (Head-Up Display), that could be lowered if you don’t care to use it.

There’s also a dual climate control system, plus outward visibility is good as the Soul is wrapped in large windows. That tall rear hatch window also includes a wiper, excellent to have in soggy Wisconsin.

Need more to like? There’s a sunroof overhead, a Harmon Kardon audio system, and a flat-bottomed steering wheel that eases entry and exit for the driver.

But we haven’t even gotten into the electronics and safety equipment. For those of us partaking in the modern age, all Souls come standard with Android Auto and Apple CarPlay so you can hook up your devices. Plenty of plug-in spots too. Just needs a wireless charger now.

On the GT there’s dynamic cruise control, a collision warning system with pedestrian recognition, along with the standard traction and stability controls, blind-spot warning systems and forward collision warning that starts at the S trim level. A lane-keeping assist system is here too, but I turned it off mostly as it was beep crazy, meaning it went nuts even if you were slightly near a centerline. Too sensitive!

I haven’t mentioned fuel economy yet either. I got 27.5 miles per gallon while the trip computer was pretty sure I was closer to 32 mpg. That happens. The EPA rates the Soul GT at 27 mpg city and 32 mpg highway, which should be possible without a lot of cargo or buddies aboard.

Economy of weekly use is one thing, but car loan payments are another. Yours won’t be too large with a Soul. The base LX starts at … wait for it … $18,485, including delivery. Sure, you’ll only get that 147-horse engine and a six-speed manual transmission, but you’re paying less than $20 grand my friend.

There also is a sporty looking GT-Line model with that 2.0-liter I4 and a CVT (continuously variable transmission. That model is a full $7,500 less than the tested GT with the turbo, but it looks the same.

Next is the S model that adds many of the safety features mentioned above. This may be the best overall value at $21.335. All Souls beyond the LX also feature a gas-saving Stop/Start system.

Next is the X-Line, EX and then the GT-Line with the turbo, which lists at $28,485 including delivery. The tester added just floor mats and cargo tray, so ended up at $28,710.

That’s a lot more than a base Soul, but the GT with turbo offers virtually everything you’d want, or expect on a $35,000 sedan or crossover, save AWD.

Note too an electric version, the EV, is coming and will cost about $35 grand, yet have a 243-mile range. That’s still below the average cost of a new car these days.

And if your budget won’t allow the stretch to EV or even GT with the turbo, that’s fine because there are so many Soul choices in the $18-$23,000 range. Any way you want it, Soul is one of the best high-value bargains on the market. No wonder, like Beetles in their hay day, you see so many on the road.

Made in: Gwangju, South Korea