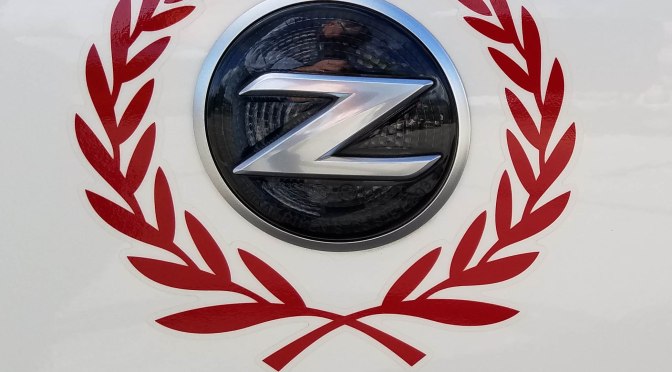 Latest Z car a beauty, and a bargain …

Sports cars used to be more plentiful, but as we Americans have become larger, so have our cars, crossovers and trucks. Rare is the sporty or sports car, and rarer yet, one we could afford.

But in 1970 Nissan introduced its Datsun 240Z, a long-nosed low-slung sports car with quick handling and a modest price. That same formula is working for 2020 as Nissan launches its 50th Anniversary edition of the Z car, now a Z370.

Fun to drive, fast, nimble and still as eye-catching as ever this Z370 lights up any parking lot or driveway with a red hood, red sweep over the doors that bathes the tail and a couple red hash marks on the doors. You’ll look fast and be noticed.

While there is much to like about the car’s performance, I feel the price is equally impressive. A base Z370 starts at $30,090 and this Sport model with the 50th anniversary package, and delivery, lists at just $37,605. Amazing!

There’s this and Mazda’s Miata in that price range, and little else, especially with the Nissan’s power. A 3.7-liter V6 rests under the long low hood. It creates 332 horsepower for the svelte 3,386-lb. sportster. Power is stout.

Best yet, for a true sports car, there’s a slick 6-speed manual transmission to allow you to use that power as you see fit. Hold first and second gears a bit and the torque will push you back in the seat and you’ll feel like you’re on a crazy amusement park ride. Or you can shift early and smoothly to give the car a bit of a luxury feel.

Handling is quick and easy with good road feel and steering feedback. Cornering is fun as the wide R-rated 19-inch tires provide solid grip for the rear-drive Z.

On the downside is the Nissan’s overly firm sports car ride that can be pretty jiggly in city driving and can deliver a few jolts to the backside. The Z features an independent aluminum double-wishbone front and multi-link rear suspension that is sport tuned. That aids handling, but not ride. Plus the Z370’s short 100-inch wheelbase doesn’t help spread bumps much either.

But run this up to highway speeds and cruise onto the freeway and the ride smooths out enough to make for a reasonable road trip, although road noise could be a concern. Not sure how much of that was the R-rated tires and how much a lack of sound deadening in the cockpit. But wind and road noise were clearly noticeable.

Inside, this special edition has black leather-trimmed seats with red stitching and red and black dot patterned cloth center cushions. The shift handle is black leather with red trim and the steering wheel, wrapped in baby-soft black Alcantara, features a red stripe at the wheel’s top. The dash also boasts a big enclosed storage box mid-dash where an infotainment screen might normally rest. Its flip-up cover is leather with red stitching and serves as a reasonable spot to hide your phone or sunglasses.

Because this is intended to be a driver’s car there are few distractions in the cockpit. There’s a simple 6-button stereo that’s easy to tune, but no info screen or navigation system. There’s also not a lot of safety devices to concern yourself with. Nissan expects you, not a computer and sensors, to drive this car.

For instance, the Z370 has just the basics, traction control, vehicle dynamic control, anti-lock brakes, airbags and a security system. A backup camera displays via a small inset in the rearview mirror, but no parking sensors, cross-traffic alerts, emergency braking, pedestrian recognition and, thankfully, no lane departure assist.

While the Z car is short on those items, it does have heated power seats, a manual tilt steering wheel, push-button start (with a red ring to match the other interior highlights), cruise control, automatic temperature controls and a Bose audio system. Everything works well and is simple to use while driving, a key because so many of today’s newer cars are button and sensor crazy, making them more complex and distracting to drive.

There’s no sunroof either. But the sun visors have extenders, and that’s always a plus.

I’m no spring chicken anymore, so I have to mention that the Z car is a low-rider, as are most sports cars, with a low seating profile. So lowering oneself to get in and then crawl back out is not the easiest of tasks for those of us with aging backs and hips. But once inside it’s worth the effort and the seats are well shaped and supportive.

I was disappointed too that the Z370 didn’t have a flat-bottom steering wheel. That would look far racier and also would clear some knee-room for a driver as he or she climbs in and out.

Gas mileage was a bit of a surprise too, although I suppose I shouldn’t be expecting a lot since the Nissan has 320 horses. I got 21.6 miles per gallon while the EPA says to expect 17 mpg city and 26 mpg highway. 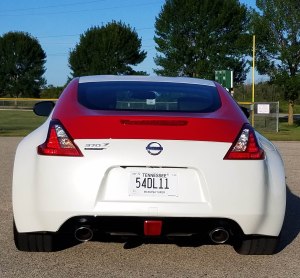 This Sport model starts at a modest $34,715, including delivery, and the 50th Anniversary package that adds that great exterior paint job, plus the Alcantara wheel, power seats and all the decals and interior red stitching, adds $2,600. Total, as mentioned earlier, is $37,605.

If you don’t require 400+ horsepower to have fun, and are of middle-income means, this is one of a very few sports cars you might afford, especially now that Chevy’s Corvette has become such a premium buy, and moved its engine behind the driver.

Zzzz? No dozing here, just fun and a love for the road, at a reasonable price. 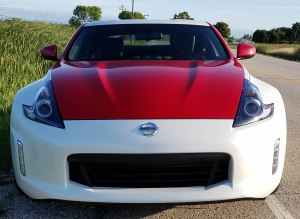 Misses: Overly firm sports car ride, short of some safety features and low-rider so tough for older drivers to crawl in and out. Also needs a flat-bottom steering wheel to complete sporty interior look and allow for easier egress and ingress.