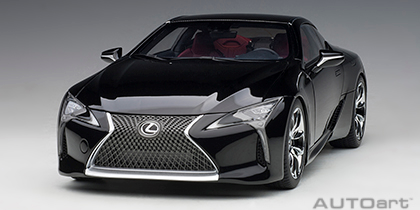 Life can be kind of ironic sometimes.

A few weeks back I slid behind the wheel of a beautiful Lexus LC 500h, the hybrid model of this sexy sports car. Not many current cars knock you out when you first see them, styling overall being pretty bland these days.

But the LC 500 is a knockout with the punch of a heavyweight fighter. It’s graceful, sleek, some might even say sexy. Then Autoart’s new 1/18 scale Lexus LC500 arrived for review. Talk about timely.

The LC 500 is not rugged like an old MG or Triumph for cryin’ out loud. It’s a rocket on wheels, but as smooth and silky as any luxury sport sedan, but with just two seats.

Officially the LC 500 is considered a Grand Touring car, that’s a GT to most of us. Designed in California and built in Japan it reminds of the former Supra and also Nissan’s famous Z car — long low hood, short rear-end. But it’s more sculpted and flowing with a certain artistic flair that most other sports cars today don’t have. And even with the hybrid powerplant, a V6 and two electric motors, it’ll crank out 354 horsepower via a 10-speed automatic transmission. Lexus says 0-60 mph comes in 4.7 seconds. 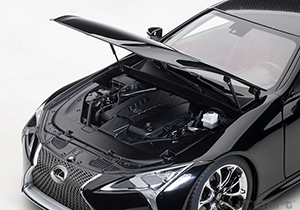 Tadao Mori was the chief designer on the LC 500. (To see my review of both versions of the real car go to the search function on this site.)

Looks are everything with the LC 500 and Autoart nails the looks in its new 1/18 scale composite body version. This one was a handsome black with dark rose and black interior, and that touch of color really makes the interior pop. Other colors are available too.

The coupe’s grille is masterfully created in a herringbone weave of photo-etched metal mesh to resemble the uniquely shaped large grille of the street version. Sharply angled headlights look real and ready to light up and the taillights are equally nice, with the thin wraparounds extending into the car’s rear haunches with red lenses inside.

Side mirrors have true mirrored faces, the twin exhausts in back are chrome trimmed and there are Lexus logos front and rear. Those also appear on the satin chrome wheel hubs and there are giant disc brakes easily seen behind those wheels. Lexus calipers are there too and tires, Michelin branded, are treaded. Classy!

Openings are many as the doors, trunk and hood all will pose either open or closed. Not all composite models these days feature an opening hood with detailed engine, even at this price.

But the V8 looks sharp here with pipes, plumbing and a well-shaped engine cover over the top. You also can see a dipstick and big body supports under the hood. Even the struts to support the hood look realistic.

Inside, this is a standard left-hand drive model with beautifully detailed dash with silver painted trim around the air vents and controls, plus a tall center console with shifter and grab handle for the passenger to use as the driver is putting the Lexus through its paces. The steering wheel looks like that in the car, Lexus logo at its center, and buttons all over the hub.

The floor is flocked and gas, brake and dead pedals are well detailed and even those rose and black seats have molded in seat control levers. Door panels also are nicely detailed.

On final note, the roof panel features a carbon-fiber finish to accent this black beauty’s overall appearance and there’s a small wing that will fold out of the trunk lid to give your model more downforce as it sits in your display case.