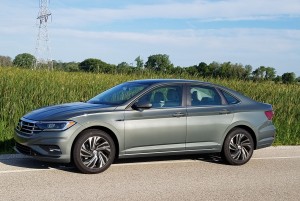 This new 2019 Jetta SEL Premium (top-end model) is slightly larger than its predecessor while remaining a fun easy driver that’s user friendly and an automotive bargain. All that should make Jetta a runaway sales success, but the likes of Honda’s Civic, Toyota’s Corolla, Subaru’s Impreza and the Mazda3 continue to run away with most of the sales.

That shouldn’t be the case, although VW may want to advertise its compact gem to gain back some market share.

This seventh generation Jetta, a nameplate that’s been around 40 years now, rides on a 105.7-inch wheelbase, 1.3 inches longer than before, and the car is 185.1 inches long, nearly 2 inches longer overall. Much of that went into the back seat, which is roomy, yet the trunk remains a sizeable 14.1 cubic feet. 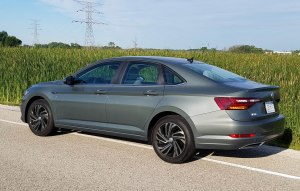 While every car, except Mazda’s Miata, seems to grow with each new iteration, the spurt here hasn’t hurt Jetta’s nimble handling, and may have slightly improved its ride.

VW has the handling down in its small and compact cars. Jetta feels light, and is at 2,970 lbs. It turns into corners crisply and with an exuberance rarely found in cars starting at less than $50 grand. Running it through winding country roads is a treat. No body lean and a taunt feel overall.

Power is good too, although not as stout as the previous version’s 1.8-liter turbo I4 that created about 170 horses. The turbo 1.4-liter I4 here cranks out 147 horsepower, but a peppy 184 lb.-ft. of torque, same as in earlier models. The car feels downright frisky, although there’s a bit of hesitation in power when accelerating off a turn.

While you can still get a 6-speed manual transmission in the base S model, the 8-speed automatic in this model is excellent. Shifts are quick and precise and well matched to the engine. A stop-start feature also is standard to help boost gas mileage, and it restarts smoothly. 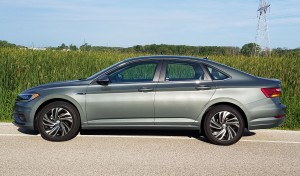 Gas mileage has grown with this 1.4-liter engine too. The Jetta I drove two years ago was rated 23 mpg city and 33 highway. The 2019 model is rated 30 mpg city and 40 highway. I managed an impressive 38.2 mpg in about 60% highway miles. Regular unleaded is its beverage of choice too, so no premium fuel cost penalty as with many turbos.

Ride remains firm, as in previous models, but seems a bit tamer and less severe on lunar-esque Wisconsin roads than earlier VWs. The ride is well controlled and sporty, aiding the car’s handling. The irony here is that VW has saved some money by reverting back to a torsion beam suspension in the rear, away from a multi-link system.

Jetta’s braking is particularly good from its four discs and VW includes stability control and an electronic differential lock, plus an intelligent crash response system too, if an accident should occur. 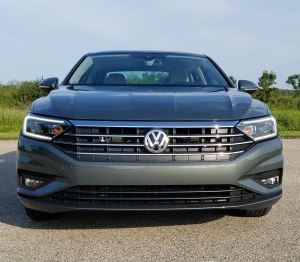 Other safety items are here, as on most cars today, proving that you needn’t spend a lot to have all the current safety features.

A rearview camera is standard, even on the S model, plus this SEL Premium had blind-spot warning and a lane keeping assist system along with cross-traffic alert in back and a front collision warning system, and automatic emergency braking. That’s pretty much the full boat for safety equipment these days.

Inside, the restyled Jetta with its well-tailored body and new grille, is as clean and attractive as past models. This Sage Green Metallic test car (light grayish green) featured a sharp gray over light gray to off-white leather interior. Leather is standard only on the SEL Premium model.

The dash is clean and simple. There is a brushed metal streak on the doors and dash and gloss black trim by the info screen. A matte black trim surrounds the shifter and the steering wheel is black leather.

Seats are perforated leather and extremely comfortable with good support all around. The driver’s seat is 8-way powered with a power lumbar and three memory settings, while the passenger’s seat is manually adjusted. Head and legroom are generous front and rear. Several back seat riders were surprised by the knee and legroom. Front seats also are heated and cooled in the test model, while the rear seats were also heated, as was the steering wheel. 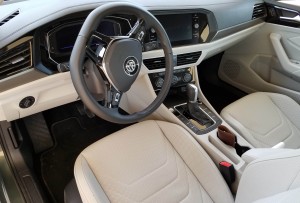 An 8-inch infotainment screen is standard on the SEL and SEL Premium models, up from a 6.5-inch screen on lower trim levels. This has small radio volume and channel tuning knobs beside it, making tuning easy. The test car also features a Beats audio system that sounds much better than past systems.

Notable too are the air vents here (I know it’s a small thing) because they were so good at efficiently moving air around the cockpit, not always a VW strong point. Another plus is the tilt/telescope steering wheel that’s D-shaped, or flat-bottomed, allowing more knee room when entering and exiting the car. That space is welcome by shorter drivers as they often have the driver’s seat closer to the wheel creating tighter knee clearance.

There are good climate dials beneath the screen along with USB hookups and 12-volt plug in the space beneath the stack and in front of the console-mounted shifter. That area is large enough to hold a charging cell phone too.

One disadvantage though is the tiny buttons on the steering wheel hub. Some are hard to see and recognize their function. More intuitive controls would be helpful. 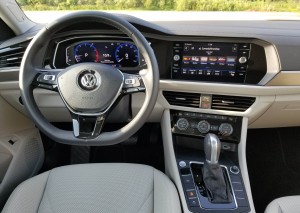 Overhead is a snazzy panoramic sunroof, but I’d like a solid sun screen inside to limit the light and heat on bright summer days. This screen lets in too much light and heat.

Best to me though is that all this is available at such a reasonable price. The test car, the top-end model, is $27,795, including delivery. No options on this one, and honestly, none are needed it’s so well equipped. That’s about $7 grand less than the average cost of a new car or crossover.

A base S model starts at a smidge over $20 grand with a six-speed manual tranny while an SE with automatic is $23,000, and includes the panoramic sunroof, heated front seats, push-button start and dual climate controls. Heck, even the blind-spot monitor, forward collision warning and automatic emergency braking are standard on the SE.

A new R-Line model, which is sportier than the S and SE adds an electronic front differential for better handling, plus 17-inch aluminum-alloy wheels, and 2-tone seating. It lists for $23,845.

The tested top trim SEL Premium adds a navigation system plus the various items listed earlier in this review. All are high value models when compared with the competition, especially now that VW offers a bumper-to-bumper 6-year or 72,000-mile warranty that’s transferable. Cool! 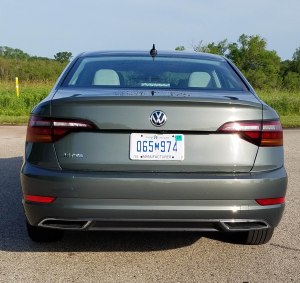 Misses: Firm ride, some acceleration hesitation, small buttons on steering wheel and not all are intuitive, net instead of solid sunroof cover.